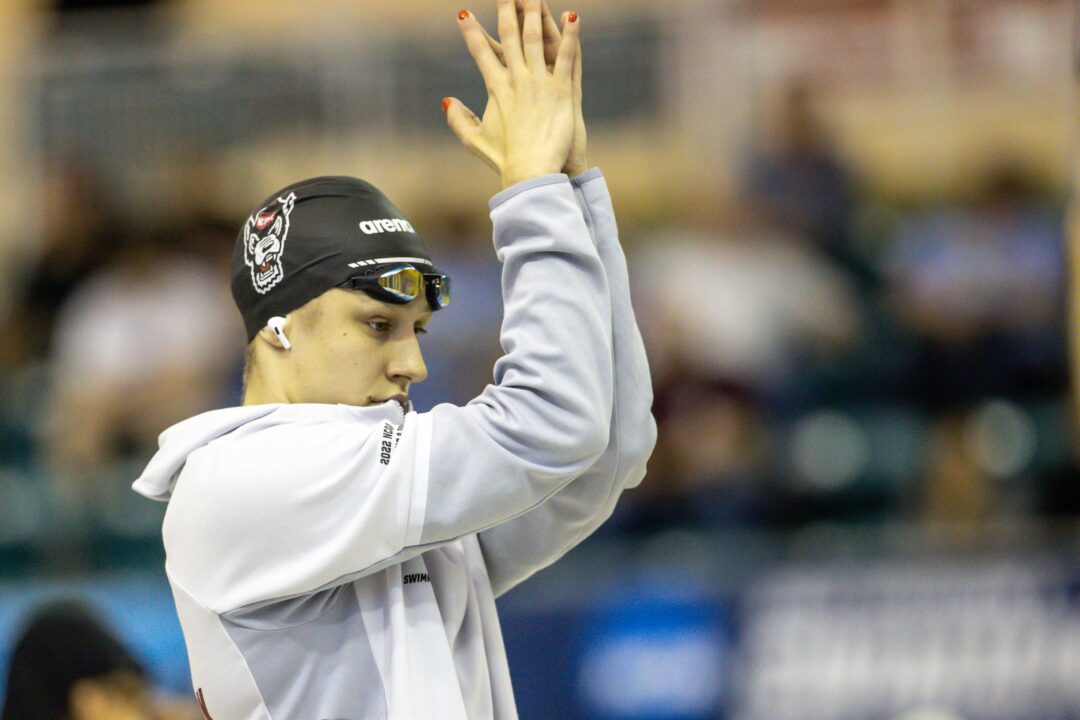 With NCAA Champion Sophie Hansson gone, Andrea Podmaníková will get her chance in the spotlight as a 5th year for the NC State Wolfpack this season. Archive photo via Jack Spitser/Spitser Photography

The NCAA season is about to get underway. As part of our coverage, we’ll be highlighting five breakout candidates for both men and women for the 2022-23 campaign.

This list is in no way exhaustive, so if you want to mention someone that we did not include, please feel free to do so in the comments.

A few important notes on our criteria and defining what “breakout” means:

The list is not ranked, and is listed in alphabetical order.

Michigan sophomore Lindsay Flynn has one of the most intriguing career trajectories in college swimming. In her age group days, she was a standout athlete in both swimming and field hockey, but gave up field hockey to focus on swimming in her junior year of high school. That same year, she dropped nearly a second in her short course 50 free and two seconds in her 100 free, so clearly prioritizing swimming worked. In addition to being a two-sport athlete, Flynn had to go through the process of committing twice, as she verbally committed to Indiana in the fall of 2019 but changed her commitment to Michigan in June 2020—making her path towards college even more unique.

Flynn continued this improvement into her freshman year at Michigan, coming in with best times of 22.03/48.15 and dropping down to 21.94/47.50. She scored six points individually for the Wolverines at 2022 NCAAs, finishing 11th in the 100 free. But where she contributed the most was on relays, as she swam on Michigan’s 200/400 medley and free relays, all of which finished top 8 at NCAAs. Her fastest relay splits last year came from Big Tens, where she anchored the 400 free relay and 200 medley relay with times of 47.07 and 21.40 respectively.

Compared to other swimmers on this list, Flynn didn’t drop as much time, and she also doesn’t really have a strong third event. However, we chose to include her because of the bigger role she will take on for Michigan this year. Although Flynn is a phenomenal sprinter, she spent freshman year in the shadow of Maggie MacNeil, who is one of the best sprinters in the NCAA and was the face of Michigan swimming alongside Olivia Carter for the last four seasons. With MacNeil and Carter gone, there will be increased spotlight placed on Flynn and her individual and relay contributions, as her and Letitia Sim will be the only two returning NCAA scorers for the Wolverines.

Because of her individual success and the fast splits she provides on four different NCAA relays, Flynn will have to transition from being just a “good swimmer” to arguably the most critical piece on her team this season. And if she takes that on successfully, just like the many other transitions she’s made prior to college, she could be in for something big her sophomore year.

Despite her major time drops at ACCs, I remember being hesitant to put her in the top 8 of my 200 IM preview for 2022 NCAAs because of how much she added from conferences to NCAAs in 2021, and also because the event had gotten so much faster in a year. She went on to prove me wrong though, as at 2022 NCAAs, she did the opposite of what she did in 2021, dropping even more time from ACCs to finish sixth in the 200 IM ‘A’ final with a new personal best of 1:54.38. In addition, she also went a personal best of 2:05.78 to win the 200 breast ‘B’ final,  a time that was fast enough to beat four swimmers in the ‘A’ final. She was a bit off in the 200 free, finishing 19th in 1:45.12, but her times from ACCs show that she also has scoring potential in this event.

Based on her performances at 2022 NCAAs, it’s safe to say that her “adding time at championship meets problem” was a product of first-year inexperience, and not indicative of her potential in the future. She wasn’t talked about that much last year because her success was lost in the wash of swimmers from “bigger” schools such as Virginia, Stanford, etc., but she has certainly proved herself to be one of the best in the country in both the 200 breast and 200 IM. And this year, with Duke gaining two top 20 recruits (with one of them being Kaelyn Gridley, the top 200 breaststroker in the high school class of 2022), Foley could see herself leading a team that has a ton of momentum and could surprise many at ACCs and NCAAs in 2023.

You may recognize the name Nyah Funderburke from Big Tens last year, where she swam the fastest time in the 100 back prelims, but could not advance to finals because she had been placed on the non-scoring roster prior to the start of the meet (at Big Tens, schools are allowed to bring 24 swimmers but only 18 of them are allowed to score). In fact, her prelims mark of 51.66 would have been fast enough to place second in finals. Luckily, Funderburke’s time counted even though she wasn’t scoring, and she was able to qualify for NCAAs.

At NCAAs, she was left out of the finals again, and that time it was because she tied for 16th with Sophie Lindner in the 100 back prelims and had to do a swim-off. In that swim-off, she set a new personal best of 51.55 but was beaten out by Lindner and could not earn a night swim. However, her swim-off time would have been fast enough to finish 12th in prelims and qualify her for the ‘B’ finals.

Despite Funderburke’s misfortunes at championship meets, she put the nation on notice with her 100 back, dropping from a 52.92 to a 51.55 her freshman season. She struggled to hit best times early on in the season (her 2021-22 season-best prior to Big Tens was only a 54.51, which explains why she was not on the scoring roster), but ended up being one of the only Ohio State swimmers to drop time from conferences to NCAAs. She also saw huge improvements in her sprint freestyle, as she came into the season with a best time of 23.49 and dropped down to a 22.40 to finish 41st at NCAAs.

Funderburke’s rise coincides perfectly with the departure of Emily Crane, who swam the backstroke leg on Ohio State’s 200 medley relay and was also a member of the team’s 200 and 400 free relays. This season, Funderburke could see herself on both medley relays as well as the 200 free relay, and potentially the 400 free relay if she improves upon her 100 free personal best of 49.85.

In her time at Florida International University, Jasmine Nocentini had best times of 22.23 and 48.93 respectively in the 50 and 100 free. Then, when she transferred to Northwestern for the 2021-22 season, those times improved to 21.78 and 47.76 as she took third place in the 50 and fifth place in the 100 free at 2022 Big Tens. With times that would have been fast enough to make the ‘B’ final, Nocentini was primed to make a big impact for her team at NCAAs. However, she ended up not swimming at the meet, scratching out all of her individual events and not appearing on any relays.

When a sprinter as good as Nocentini doesn’t swim at NCAAs, there’s inevitably the question of what they could have done on the biggest stage. And this season is her chance to answer that question.

Coming into the 2023-23 season, Nocentini will take on the role of Northwestern’s sole NCAA-qualifying sprinter after the graduation of Maddie Smith, whose 50 free school record was broken by Nocentini last season. This means claiming anchor leg duties in both medley relays and making an appearance on the 200/400 free relays as well. There’s a lot of potential in the 400 medley relay, where the Wildcats finished ninth overall at NCAAs and return ever single swimmer on the team besides Smith. If Nocentini can step up on this relay, she could help her team earn their first top 8 relay finish at women’s NCAAs since 2000.

With all the success of Sophie Hansson, you might not pay much attention to the fact that NC State has another 57/2:05 breaststroker up in their vault. Well you will this year now that Hansson is gone, as it’s now Andrea Podmaníková turn to shine as her team’s top swimmer in the 100 and 200 breast.

Podmaníková always been a strong breaststroker, but this year she will get more spotlight with Hansson gone. This is especially true for the medley relays, where NC State took second behind Virginia in both races, swimming the second-fastest non-UVA performances of all time. With more opportunities at the helm on breaststroke in relays, will Podmaníková potentially match or even better Hansson’s relay splits and give NC State that extra push, and will she gain more momentum to improve individually?

BuT wHaT aBoUt my daughter / teammate / club swimming friend / off-campus roomie?

But didn’t come close to it last year?

Grammy Andrejka with the love from swimswam!!!😻

Someone that I am watching out for this season is incoming freshman, Blair Stoneburg. Stoneburg is the best distance swimmer in the class of 2022, and holds PB’s of 1:44.6/4:38.6/9:34/16:14 in the SC free events. Her LC 1500 of 16:37 and her ability to swim the OW events suggests that she has potential to have an absolute breakthrough in the 1650 this season. Training with Wisconsin, Paige McKenna broke through with a 15:40 to win the NCAA title after stalling time drop wise over her senior year, giving me hope in Stoneburg. She’s had an incredible LC season this year, going 4:13.8/8:41 in the 400/800 free events, and is also an elite sprinter

You had me until the last 2 words. Nope.

I meant to say swimmer. Whoops

I swear, everytime I open this app it’s Sherry taking about distance girls.

No offense to Bella Sims and Claire Weinstein.

An average swing of -.5 and she should be around 47.5 for a possible NCAA A Final