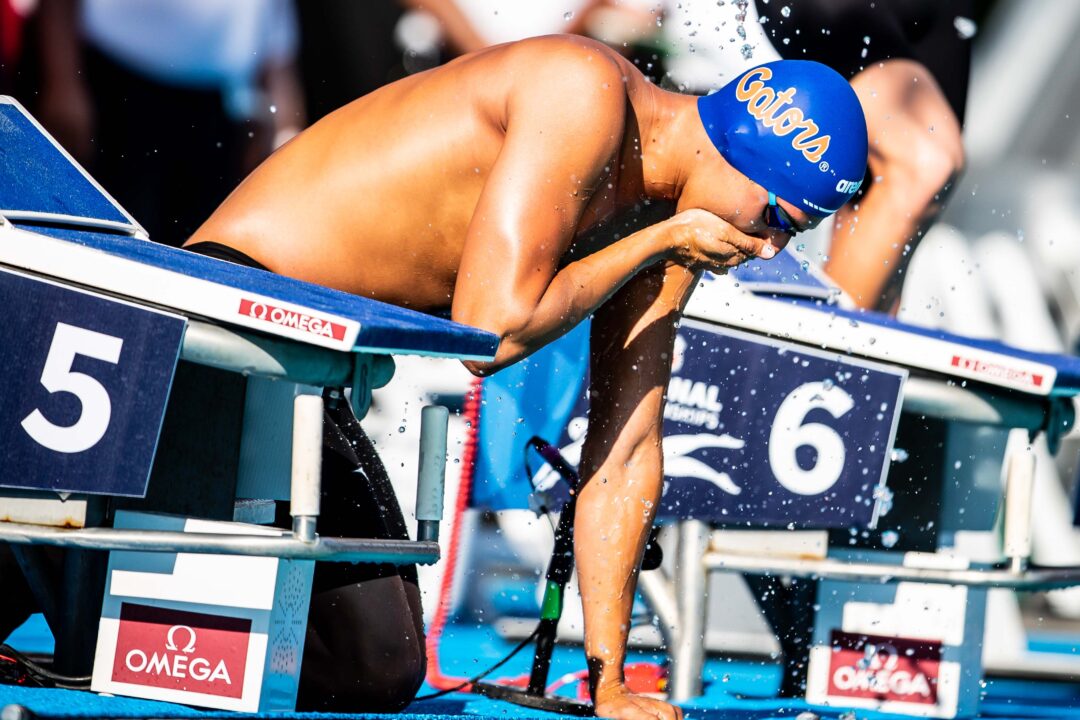 The newly crowned U.S. national champion in the 400 IM, Florida senior Kevin Vargas seems on the precipice of a breakthrough in yards this NCAA season. Archive photo via Jack Spitser/Spitser Photography

The NCAA season is about to get underway. As part of our coverage, we’ll be highlighting five breakout candidates for both men and women for the 2022-23 campaign.

This list is in no way exhaustive, so if you want to mention someone that we did not include, please feel free to do so in the comments.

A few important notes on our criteria and defining what “breakout” means:

The list is not ranked, and is listed in alphabetical order.

The Stanford men had their own breakthrough as a team last season, jumping from 14th to seventh in the NCAA standings. They come into this season on an upswing, though one of the key things they need to do in order to move up any higher in the rankings is have more swimmers scoring individually and multiple swimmers scoring in the same event.

That’s where junior Jonathan Affeld comes in. He’s one of the most versatile swimmers on the Cardinal roster. Individually, he swims the 200 IM, 100 fly and 200 fly, and he’s also consistently strong on the sprint free and medley relays.

He added time in all of his individual events at NCAAs, finishing 18th in the 200 IM, just on the cusp of scoring. While he would have needed to drop lifetime bests in the 200 IM and 100 fly to score, had he swum his best in the 200 fly, he would have made the ‘B’ final and ultimately finished 14th.

His results last season show that he’s capable of scoring individually. He’s made significant improvements in all three of his main events during his time at Stanford, and if he continues to improve he should be a threat to score in all three events. Now, he just needs to put it all together at the right meet.

The Hokies have a Spanish-heavy roster, so he’s surrounded by a familiar training group as he returns to campus this year. That group raced together at European Championships, where Domínguez teamed up with Sergio de Celis and Virginia Tech teammates Carles Coll Marti and Mario Molla to break the Spanish national record in the 400 freestyle relay twice. Earlier in the meet, Domínguez became the first Spanish man under 49 seconds in the 100 free and though de Celis eclipsed his days-old record, Domíinguez popped another two blistering splits—47.95 in prelims and 47.89 in finals.

In addition to helping set national records, he put up lifetime bests in the 50/100/200/400 meter freestyles this summer. Long course speed doesn’t always translate well to short course yards, but returning to Blacksburg for his sophomore year, Domínguez has a season of experience in yards to rely on. Having that experience will be key for him as he transitions back to yards after a successful long course season. Watch for him to continue to be an important part of the Hokies’ relays and qualify for individual events this year.

It’s about time to pay attention to Jake Foster. Most of the Foster buzz so far this quad has focused on his younger brother, Carson, and his saga of finally figuring out how to go fast when it counted. But the elder Foster has been knocking on the door for a while, and this could be the season here he finally breaks through.

Foster cracked 2:10 in the LCM 200 breast for the first time at U.S. International Team Trials, where he finished third, just missing a berth on the World Championship team. Ultimately, he got his time down to 2:09.00 at U.S. Nationals. He also set a lifetime best of 1:58.64 in the 200 IM back in April.

That gives him 30 individual NCAA points last season, fourth-most among returning Longhorns. There isn’t a ton of room for Foster to move up in the any of his events, but given his breaststroke improvements, he should challenge for the 200 breast ‘A’ final. Foster securing that third ‘A’ final would be a huge boost for a Longhorn team that will need to be firing on all cylinders if they want to reclaim the NCAA team title.

Outside of the boost that his improvement brings to the team, this season could be the moment that Foster separates himself from the crowd and makes headlines of his own.

The Auburn Tigers have had a few down years recently, but in his first season, head coach Ryan Wochomurka led the men to their highest finishes at both SECs (6th) and NCAAs (29th) since 2018. They continued that momentum into the offseason, with a strong showing at U.S Summer Nationals.

Aidan Stoffle was one of the Auburn swimmers who shone in Irvine, cutting over a second off his best in the 100 meter fly with a 52.76, and taking two-tenths off his 100 back mark with a 54.75.

Entering his senior season with the Tigers, Stoffle is one of the swimmers that will be counted on to help lead Auburn further up the standings. Last season at NCAAs, he scored a pair of individual points after winning a swim-off in the 100 back for the ‘B’ final. His prelims time of 45.36 was a lifetime best.

Stoffle was one of three individual NCAA scorers for the Tigers last season, and he’ll be counted on for those points (and more) this season as Auburn looks to continue to rise up the NCAA standings. The 100 back remains a crowded field, but Stoffle has made steady improvement over the last year, and it looks like that could continue into the new short course yards season.

Keep an eye on his 100 fly as well; before the 2021-22 season, his best was a 48.55 from 2019. He reset that mark multiple times last season, cutting a whopping 2.26 seconds off and lowering it all the way to 46.29 at SECs before opting to scratch the event at NCAAs. He’ll need to drop more time to score, but based on his improvements in the long-course edition of the race, he still has room to drop.

Also riding the momentum from a strong summer in long course is Florida senior Kevin Vargas. Vargas wasn’t on a lot of people’s radars before U.S. Nationals, where he dropped over five seconds from his 400 IM in one day, hitting 4:11.46 to become the 2022 national champion. After cracking the top 25 all-time U.S. performers list with his prelims time of 4:14.27, Vargas launched himself into the top 10, taking over the ninth spot all-time.

The back half of his IM is his strong suit, but Vargas has made major improvements to the front half of his race; he split over two seconds faster on his fly in both prelims and finals than he did when he swam his previous best. He also cut almost three seconds off his backstroke split. This improvement in backstroke has already translated to yards, in Florida’s first dual meet of the season, he set lifetime bests in the 100 and 200 yard back of 50.94 and 1:49.67, respectively. Neither of those will make noise at a championship meet, but they show that Vargas is still rolling.

All of this bodes well for the senior, who will have much more of a leadership role on the team not just because of his class year, but because Florida graduated Olympians Kieran Smith and Bobby Finke. It’s largely due to their strong recruiting class that we project they’ll retain their third place in the NCAA, but Vargas could be one of the returners who steps up in their absence and makes a major difference.

Vargas scored six individual NCAA points last year via his 11th place in the 400 IM (3:40.31). This season, he should challenge for the ‘A’ final and bring in more points for the Gators. In the 200 IM, he hit a lifetime best of 1:44.10 at NCAAs to finish 38th. The 200 IM remains a bottlenecked event, but if he can drop like he did in meters, then he could push for a night swim there, too.

I hope the reason for not including Jack Dahlgren on this list are because he’s “already made it”. The dude had a phenomenal summer and has shown no signs of slowing down!

Why are you booing me I’m right.

My breakout performer is Cal’s Reece Whitley he’s only 17 but he’s been a high school phenom breaking Nag records in all Breastroke events plus he’s versatile with strength in the fly and IM events, sure to drop some serious time in his first year at college!!!

I hope Reece has a successful return for his last year of eligibility, but false comments like this are neither helpful nor humorous.

Ron Polonsky(Stanford, Sophomore) could make 3 A finals this year and swims the same events as Foster