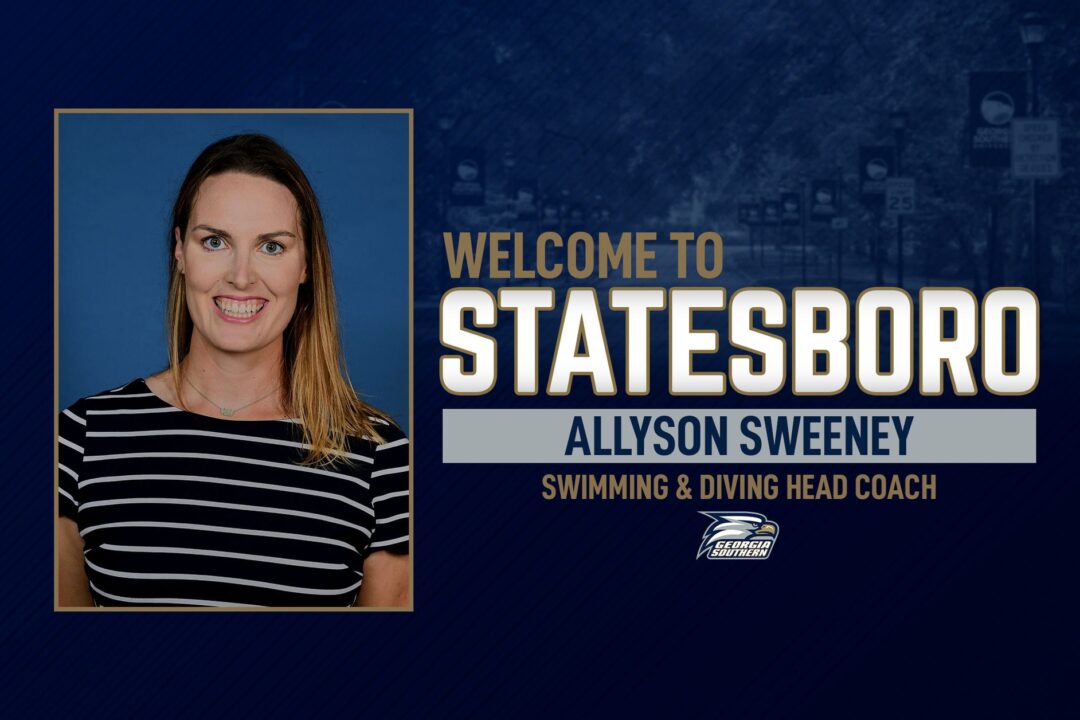 Georgia Southern named Allyson Sweeney as its next head coach on Monday, replacing Amanda Caldwell a few weeks after she left for Tulane. Current photo via Georgia Southern Athletics

The NCAA Division I head coaching carousel has almost reached its conclusion with season-opening meets approaching fast on the schedule.

Georgia Southern named Allyson Sweeney as its next head coach on Monday, replacing Amanda Caldwell a few weeks after she left to take over Tulane’s women-only program. That job opened up last month because former LSU head coach Leah Stancil resigned a day before classes began to become an assistant coach at nearby LSU. The only Division I head coaching position still vacant is at Saint Louis University, where Jim Halliburton resigned a week after classes started in late August to join the staff at cross-town WashU in St. Louis.

Sweeney brings valuable experience to the Eagles from three previous stops at Power Five programs — two as a coach and one as a swimmer at Texas A&M. She was a member of two Big 12 championship teams with the Aggies.

Most recently, Sweeney spent three years as an assistant at North Carolina. During the 2020-21 season, the Tar Heels’ men and women earned their best finishes in several years, placing 24th and 12th, respectively.

Prior to her time in Chapel Hill, Sweeney served as an volunteer assistant at Auburn, helping the Tigers achieve a 12th-place finish at the 2019 NCAA Championships — their best showing in seven years. A mid-distance freestyler in college, Sweeney worked primarily with the sprint groups at Auburn.

Sweeney also made a coaching stop at Florida Southern as well as working at the club level with Swim Atlanta – Midway and Lakeland Area Swimming.

“I am thrilled to have Allyson Sweeney join our talented group of head coaches here at Georgia Southern,” Georgia Southern athletic director Jared Benko said in a press release. “As I spoke to coaches from across the nation, her name resonated frequently as one of the top assistant coaches in the country.  Through her experiences as a student-athlete at Texas A&M, her coaching experiences with Swim Atlanta and Lakeland Area Swimming, along with her time as an assistant coach at North Carolina, Auburn, and Florida Southern, she has been uniquely prepared to excel in the position of Head Swimming and Diving coach at Georgia Southern University.”

“Thank you to Jared Benko and the Georgia Southern athletic department for entrusting to me the leadership of this program,” Sweeney said. “To join a culture intent on cultivating growth and excellence across its student-athletes, coaches, and programs ignites a passion within me. I’d like to express my gratitude to the University of North Carolina & Mark Gangloff — as well as my vast network of mentors and peers, as well as my family and loved ones — for continuing to foster my potential. I’m a living mosaic of many life experiences — ever-growing and evolving.”

Sweeney is the oldest of seven siblings — six of whom swam collegiately for a Power Five program. Her family moved to Georgia when she was a junior in high school, making the move a homecoming of sorts.

“The opportunity to return to home roots in the state of Georgia and build upon the foundations set forth by the administration has me eager to dive in,” Sweeney said. “Let’s get to work! Hail Southern!”

Sweeney isn’t the only new coach on the pool deck in Statesboro this season. First-year diving coach Trevor Sisson was hired by Caldwell in July.

Georgia Southern held an intrasquad meet on Saturday, and the team will held to the University of North Florida for a sprint/relay meet this weekend. The Eagles’ first full dual meet takes place Oct. 15 vs. Vanderbilt.

She is an outstanding coach. Chapel Hill’s loss is a wonderful gain for Georgia Southern.

Such a great hire!! So happy for you, Allyson!!

A tireless worker, a better coach, an even better person. Congratulations Allyson!