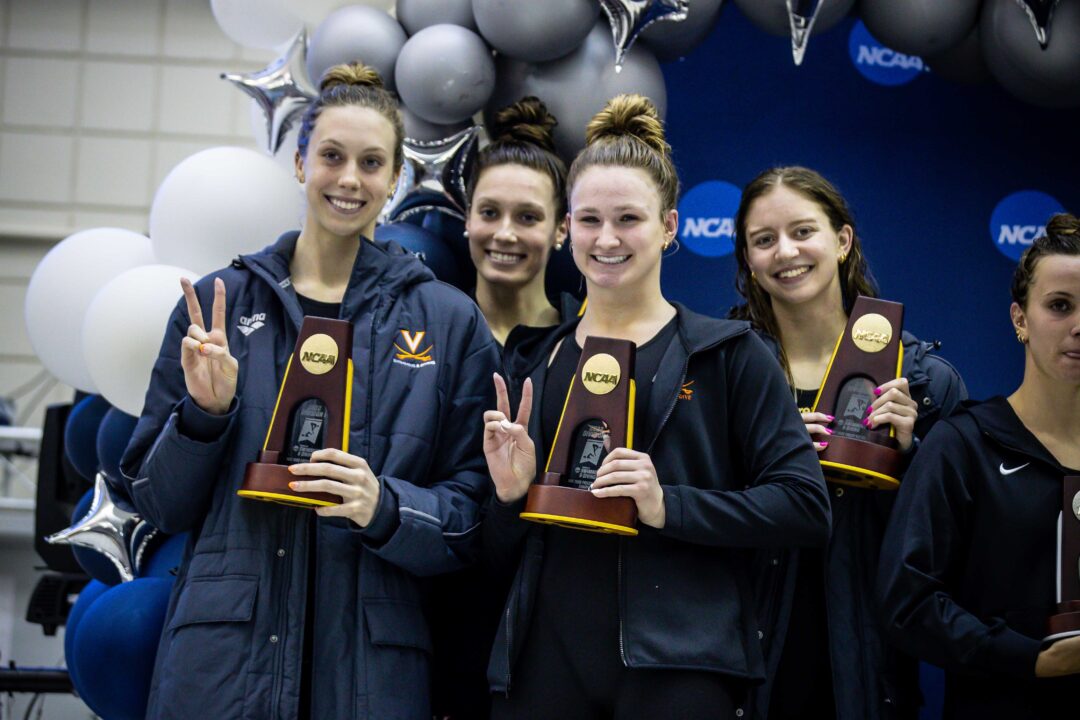 It should come as no surprise—the Virginia women rank #1 in our pre-season NCAA power rankings. Archive photo via Jack Spitser/Spitser Photography

Once the busy summer of championship meets was finally in the books, it was time to dust off our NCAA power rankings ballot and begin our projections for the upcoming season.

We’ve got an expanded panel this season—seven total writers offering their opinion—which should lead to some interesting back-and-forths over the course of the next six months.

With the women’s side of our annual College Swimming Previews having wrapped up, which take a deep dive into the top 12 teams from last season’s NCAAs, the pre-season power rankings offer more of an up-to-date look at how we rank the top 25 programs nationally before anyone has really shown what they’ve got—primarily based on roster outlook for the season.

Without further ado, here are our pre-season women’s NCAA power rankings, along with the team’s final placing at the 2022 nationals.

Chloe Stepanek just needs to put it all together at NCAAs to really grab stardom. In addition, this is A&M’s best freshman class in years – which includes three divers (Tatiana Conn, Joslyn Oakley, and Mayson Richards) who all have major international experience already. A&M is one of the better diving programs in the country, and the talent there alone is worth pushing the Aggies back into the top 25 this season. -BK

Maggie Merriman, their lone scorer last season, is back for a fifth year. Sophia McAfee was in the mix at NCAAs as a freshman and could join her teammate with scoring dives this year. -JS

The return of Olympic silver medalist diver Delaney Schnell, who took second in the 10M event at 2022 NCAAs, for a fifth year singlehandedly puts Arizona back into the top 25, even if their top swimming scorer from last year, Aria Bernal, transferred out. -YL

Emma Atkinson continues to lead the charge. Chase Travis has the ability to score a bit more, and the relays are consistently right on the edge. -JS

The Hurricanes’ diving duo of Vallee and Gullstrand is back, and they’ve also added Tara Vovk as a fifth-year from Northwestern. If Vovk can put up 10 or so points, that would likely move Miami inside the top 20. -JS

Sally Foley finishing sixth in the 200 IM at Duke is one of the under-told stories from last season. With All-American diver Margo O’Meara coming back as a sophomore, and another stud diver Josie Zillig coming in (already an international diver for GB), this is a good Blue Devil team. They have the #7 recruiting class in the country, and if they can squeeze a few points out of that group, it’s a bonus. -BK

Duke has the fastest freshman 200 breaststroker in Kaelyn Gridley, as well as #19 ranked Martina Peroni. Sally Foley had a great NCAAs last year, making two finals and hitting PBs in both events (when she added a substantial amount in 2021), so that should be a good sign moving forward. -YL

Duke’s incoming freshmen will most likely lead the way along with Sarah Foley. -AP

This is a Northwestern team that doesn’t have any weak points besides maybe the IM events (and incoming freshman Hana Shimizu-Bowers could be the solution to that) and doesn’t have any big losses aside from Tara Vovk. Jasmine Nocentini is a 21/47 sprinter who didn’t come to NCAAs and could fill in the shoes of Maddie Smith, Ashley Strouse (#14 recruit in the class of 2021) should be healthy again, flyer Miriam Guevara is coming back for a fifth year, and Sophie Angus (breast), Lola Mull (distance free), Hannah Brunzell (breast), Justine Murdock (back), and Emma Lepisova (back) all have the potential to make big contributions for this team. Their well-roundedness and ability to score in multiple relays gives them the edge. -YL

A ton of returning fifth years should keep the Wildcats in the top 20 this season. -BK

LSU scored eight points last season. MacNeil’s intrasquad times in the 50 free (final skins round) and 100 fly would have scored eight (solely looking at finals results). Even in a relatively ‘off’ NCAAs where she scored 39 points, that total alone would still put the Tigers up 10 spots in the team standings. -JS

The USC women enter the Lea Maurer era in much better shape than do the men, so don’t conflate the two. Between the addition of Justina Kozan, a wrecking crew to herself, plus Cal transfer Elise Garcia and Stanford transfer Carolina Sculti (diving), this is a very good USC team. They might take over second place from Cal at Pac-12s. -BK

Georgia has lost Dakota Luther, but had two impressive first-years last season in Abby McCulloh and Dune Coetzee who should put up some solid points. A bounce-back from Zoie Hartman, who was great in the 200 IM but off her bests in the breaststrokes last season, could slide them up a bit. -JS

Countie and Lindner returning for a fifth year is huge. -AP

The Tar Heels have been creeping up the NCAA rankings, and bringing back Grace Countie and Sophie Lindner as fifth-years will help that. The Tar Heels are lacking the immediate-impact freshman to leap into the top 10 this season, though. -BK

Given how tight #11-#17 were at NCAAs last year, the addition of top-ranked distance recruit Blair Stoneburg to add on to the strength of Phoebe Bacon and Paige McKenna should be enough to move Wisconsin up to the top of this pack. -YL

Paige McKenna is back after hip surgery, and Phoebe Bacon had a solid summer. -AP

The loss of Maggie MacNeil and Olivia Carter will sting, but expect the underclassmen to take a big step forward this season. -AP

A couple of scoring losses, but the core remains intact, led by Lauren Poole and Gillian Davey. Kyndal Knight coming back is significant, too. If the freshman class can lend an immediate helping hand to the relays, that would go a long way. -JS

I just feel like this team has so much momentum now. They have the best recruiting class (+ transfers) out of any school besides Stanford and Virginia, and can easily move ahead of top 12 teams that are losing a lot of big pieces this year (Kentucky, Michigan, Cal to name a few). Also, I wouldn’t be surprised if they led the NCAA in distance free points by the end of the year. Their 500/1650 freestylers are almost looking as dominant as their male counterparts now. -YL

Still anxiously awaiting the Isabel Ivey decision. If she’s back, that makes all the difference in the world for the Bears. With only two freshmen coming in, Dave Durden has a tall task to right this shaky ship. -BK

I think the Hoosiers will see some improvement on the relays this season, they’ll need it if they are to crack the top 10. Swimmers such as Anna Peplowski and Ella Ristic were great over the course of last season, but tweaking their taper strategy could result in a more impactful NCAA presence. -JS

Ellen Walshe is the big question mark as she is home for the fall. -AP

Losing Ellen Walshe for (at least) the fall semester hurts the Lady Vols, but uncertainty surrounding Cal keeps them well within the top 10. -SK

Amy Fulmer had an almost perfect summer and if she is able to translate that SCY, expect huge results. -AP

The Cardinals bring back the vast majority of their points from last season, and proved they can show up when it counts, outscoring their NCAA seed (scored psych sheets) by 62 points last season. -JS

NC State gets significant returns with fifth years and has most of its gaps filled with incoming freshmen. -AP

With one of the best sprint groups in the nation (I can only make a case for Virginia being better) and every single point from last year returning, it’s hard to see this team moving down. They are on a roll. -YL

All of their individual and relay points are returning. Might be one of the coolest stats ever. -AP

Losing Regan Smith hurts, but the arrival of Claire Curzan and a monster recruiting class dulls the loss. -SK

Texas vs. Stanford comes down to what is a bigger gain: Lydia Jacoby + Dakota Luther or Stanford’s out-of-this-world recruiting class. And I think that even after losing Regan Smith, Stanford wins this. The talent of Curzan, who can swim so many different events, plus several high-impact freshmen such as Charlotte Hook, Kayla Wilson, Lucy Bell, etc. etc. are just too hard to ignore. Plus, Huske just had a great summer, and I think she’s gonna make big moves this NCAA season. -YL

Maybe I’m underestimating Texas’ diving, but I’m more bullish on Stanford than Texas. Losing Smith and adding Curzan might be a wash individually, but I think Curzan’s impact on the relays, specifically free, is being undervalued. -JS

The battle for second comes down to Curzan/Hook versus Jacoby/Luther. Texas hasn’t lost much, and bringing on those two massive additions to a team with the best butterfly and diving groups in the NCAA gives them the edge. -SK

If Regan Smith was still doing NCAA, I would have *maybe* made a case for Stanford overtaking Virginia. However, since she’s gone, it seems like Virginia is a shoo-in for a three-peat unless something goes horribly wrong. -YL

Stanford shoe-in for number 1 with Smith, but they drop to 3 without her? Interesting..

In whose mind were they a shoe-in for number 1 with Smith?

Stanford has a great freshman class coming in, but so does Virginia – plus a 145.5 point cushion. Smith or no-Smith, Virginia was the favorite this season.

Including Minnesota as an “honorable mention” is definitely a stretch of the imagination.

Isabel has to be with cal still right? They have posted pictures since the school year has stated and she is in the pictures.