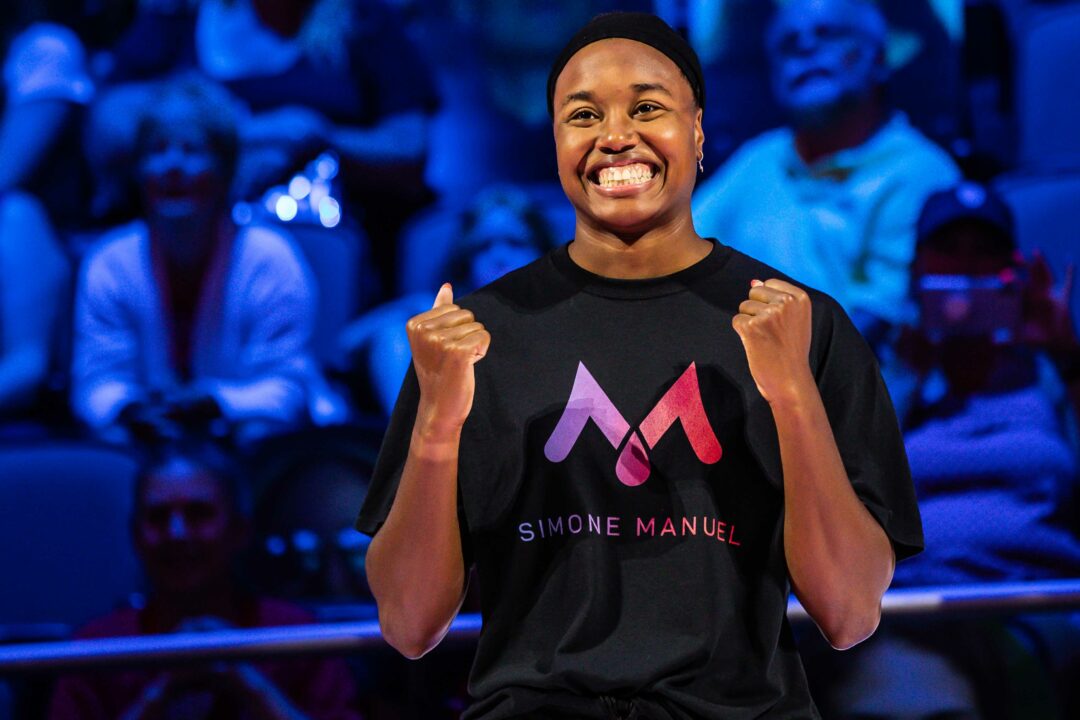 After racing only a handful of times in the last two and a half years, Manuel is back and seemingly all-in on Paris 2024. Archive photo via Jack Spitser/Spitser Photography

Simone Manuel has completely turned the page on her professional swimming career.

After a three-year run as one of the best female swimmers in the world—and undoubtedly the best freestyle sprinter—Manuel has largely stayed out of the limelight and only competed a few times since the onset of the pandemic.

She only raced a handful of times prior to the 2021 U.S. Olympic Trials, where we learned that the 2016 Olympic champion had been dealing with overtraining syndrome in the lead-up, and she subsequently failed to qualify for the team in the 100 free, the event in which she was the reigning Olympic champion.

Manuel battled back and made the Olympic team in the 50 free, and went on to win a bronze medal at the Games as a member of the U.S. women’s 400 free relay.

But after that stretch, from March 2020 through Tokyo, which was “exhausting” for a number of different reasons, it was clear it was time for Manuel to hit the reset button.

For a time, her competition status was unknown. The defending world champion in the women’s 50 and 100 freestyle didn’t turn up in April to vie for a spot on the U.S. World Championship team, and the question of whether or not she would race again began to creep into the minds of fans.

Then came the bombshell last month. The 26-year-old was heading to Arizona State to train under esteemed coach Bob Bowman and his ever-growing pro group in Tempe.

Revitalized, Manuel was ready to tackle the next two years in the run-up to the 2024 Olympics.

When announcing her move to join Bowman, Manuel noted she had made “major changes,” and we now know she wasn’t just talking about Arizona.

After spending the first three years of her pro career not only at Stanford, but signed with TYR, Manuel has switched her suit sponsorship, announcing a new deal with arena on Tuesday.

“As I start a new chapter in my life and my career, I’m looking forward to continuing my growth and taking my performance to the next level with arena,” Manuel said in the arena release on Tuesday.

Changing training bases, coaches, and now sponsors (also getting engaged). One of the greatest sprinters of this era, who experienced unparalleled success in short order from 2016 to 2019, appears to be all-in.

Whether her career in the pool goes beyond Paris (she’ll turn 28 during the Games) remains to be seen, but with this new direction, we should expect these next two years to be exciting in the world of women’s sprinting.

One of the most clutch performers of the past decade is back.

The women’s sprint in USA is well behind in international competition and desperately needs a swimmer of Manuel’s caliber. Any news of Simone coming back are very welcome. But how strong Simone Manuel is now and what can we reasonably anticipate from her is very hard to tell. The OTS reason of her decline is looking more like a coverup than a clear explanation of what had happened to her. She was underperforming from the Fall 2020 when she just got into training cycle in preparation for Tokyo. Has she been already overtrained then? Greg Meehan has a strong experience in training sprinters but we had heard nothing from him in Manuel’s case. Has she already overcome the problem that… Read more »

We don’t need revisit what happened as it’s in the past now. A long break and new training environment should be enough of a cure for whatever she had. I think worst case she only breaks 53. I’d like to see her swim fast more often and not have to wait until next summer to see it

Are they really “well behind in international competition?” Only country that’s for sure better is Australia, which is just one country.

Canada is stronger in the 100 and GB and Sweden aren’t far behind in the 100. From a relay pov yeah USA are still near the top but individually they just don’t compete with the likes of the top 6-8 Aussies, Sjostrom and Haughey to name a few

Praying to the swimming gods for a Simone Manuel comeback.

Happy she’s in a good place but think her best years are behind her.

It is negotiable and it varies greatly depending on your swimming résumé, your social media following and of course your ( or your agent’s) negotiation skills. I’ve heard some swimsuit contracts include zero salary and only are based on bonuses for accomplishments all the way up to multi million dollar contracts.

So exciting. Glad she took a break and still wanted to come back.

Very excited for Simone and her future in and out of the pool! She seems to be in a good place.