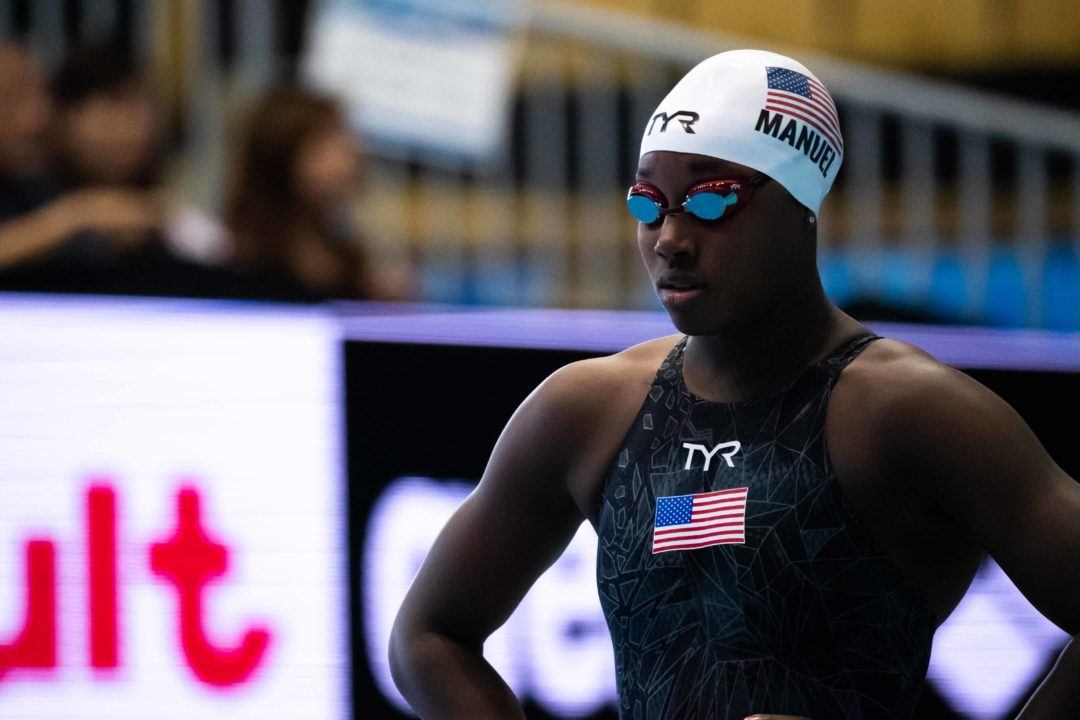 Manuel has been out of competition since the Tokyo 2020 Olympics last summer, where she competed in the U.S. women's 4x100 free relay and the women's 50 free. Stock photo via Mike Lewis/Ola Vista Photography

Olympic Gold medalist and American Record holder Simone Manuel announced via her Instagram that she’s made the decision to move to Arizona in order to train at the Arizona State pro group under head coach Bob Bowman.

After a long and much needed break, I have made major changes. I’m excited to announce that I will be training at ASU under the guidance of Bob Bowman and the coaching staff at ASU! – Simone Manuel via IG

Manuel has been out of competition since the Tokyo 2020 Olympics last summer, where she competed in the U.S. women’s 4×100 free relay and the individual women’s 50 free. Her journey to get onto the Olympic Team was a tenuous one, as Manuel revealed at the U.S. Olympic Trials last June that she had been diagnosed with Overtraining Syndrome, a condition in which the training one is doing outpaces their body’s ability to recover. OTS can have long-lasting effects, and we’ve seen Manuel pull back in her training and step away from competition since then.

Earlier this year, Manuel had made a stop in Tennessee to train with the pro group there under Matt Kredich. It’s unclear how long Manuel was there, but while there she was seen posing in training sessions with the other Tennessee pros. In the time since she was initially spotted at Tennesse, Manuel has posted a number of home workout videos on her Instagram account.

It would appear the 5-time Olympic medalist is feeling ready to dive back into things head first, as she’s now heading off to Bowman.

The Arizona State pro group has suddenly become one of the largest pro groups in the country. Recently, Olympic Gold medalist Chase Kalisz, Olympic Silver medalist Jay Litherland, and perennial U.S. National Team member Sierra Schmidt announced they were making the move to ASU to train under Bowman. On the same day, World Record holder Regan Smith announced she had made the decision to forgo her remaining athletic eligibility at Stanford and will be turning pro and moving to ASU to train with Bowman.

As far as Manuel goes, she’ll have a training partner in fellow Rio 2016 and Tokyo 2020 Olympian Olivia Smoliga, who made the move to ASU last fall. Smoliga is a sprint free and backstroke specialist, which would seemingly indicate she and Manuel will have a lot of overlap in their training. The ASU pro group also features men’s sprinter Ryan Held, who moved to Tempe earlier this year. In all, the sprint group featuring Manuel, Smoliga, and Held represents 8 Olympic medals, all of which have been won in sprint events. They also have won 24 LC World Championships medals between them.

YES!!!! I am such a huge Simone Manuel fan, she brings so much to the female American sprint free culture. She’s such a great role model for everyone to follow, and she’s wicked fast. Also love how she makes her faith a focal point in her life. I deeply respect that. Great to have you back Simone!

Bowman is a great coach, but even assuming he and each swimmer were a perfect match on an individual basis, would he be able to give enough attention to all of the flood of swimmers moving to ASU? Yes, he had Michael Phelps, but would each Michael Phelps have done as well if he had had 10 Michael Phelps at the same time? I wonder what the likes of Regan Smith are thinking now — were they expecting the coach would keep taking on all these other swimmers? I suppose having an elite training group of a good size has its own merit, but how big?

I can’t imagine the swimmers didn’t all know about each other. I don’t think Bob Bowman would make a misstep like that.

i just do not get why now, man who has not coached the highest level for a few years suddenly is the hottest coach…. Just because one prodigal son has once again found a way to his pool….?

Good move, coming to the end of her career so needed to change things up – like Ledecky. Bowman will help. He’s now building an elite squad again so will need to meet the challenge of lots of high expectations, and capability.

I recall back after 2008 Andrew Lauderstein (bronze medallist in that famous 100m fly at Beijing) admitted to sneaking in extra sessions and effectively wore himself into the ground. His was OTS as well. These swimmers need to be carefully monitored for response to training.

Best wishes to Simone Manuel in her bids to make the USA’s ‘23 WC and ‘24 Olympic teams.

In paragraph #2 of this story, Spencer Penland says:

“Her journey to get onto the Olympic Team was a tenuous one.”

I’m not sure that “tenuous” is the word you’re looking for since it means: “weak, insubstantial, flimsy, and slight.” I’d say that SM’s two-year run-up to US Olympic trials was nothing like “slight” or “flimsy.”

Perhaps “arduous” or “tortuous” is the word you’re looking for.

Things a meathead would say

Your choice of a name shows that you’re very self aware.

She made the Olympic team a year ago despite obvious effects of OTS. I believe she has a good shot at returning to the forefront of American women’s sprinting. Even if she doesn’t quite hit her PBs she can definitely still be a player.

Simone had some great victories and then fell into a slump.

She looked sluggish and low in the water. So let’s wish her well on trying to return to her perch at the top of freestyle sprint swimming.

She has gold medals already and could have just retired.

Fell into a slump? Simone Manuel burned out thanks to head coach Greg Meehan.

Don’t get me wrong, super excited for this move and how great this group will be, but… uh… didn’t she struggle with and nearly end her career on the basis of overtraining syndrome? And… Bob Bowman, the ‘mad scientist’ himself is meant to be the resolution to this? xD

What makes you think she’ll relapse into OTS there? Here is a good article on OTS. It’s far more than “swimming too much”. https://www.hss.edu/article_overtraining.asp#:~:text=Overtraining%20syndrome%20occurs%20when%20an,declining%20performance%20and%20potential%20injury.