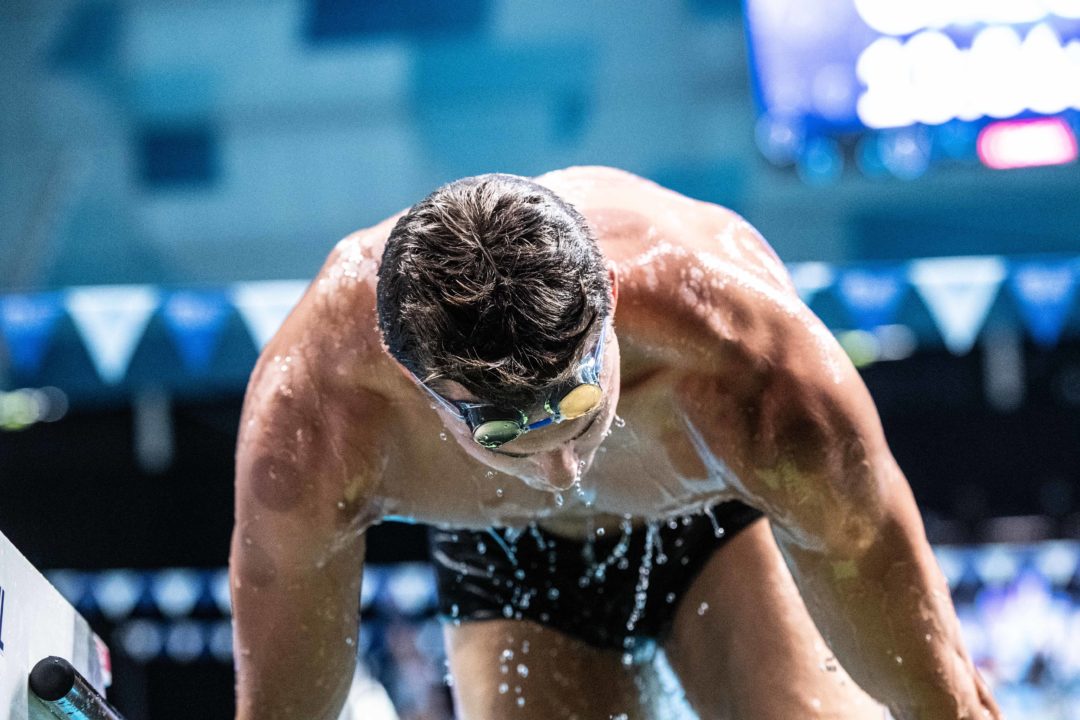 On day 2 of Match 8 of ISL Season 2, Cali has the upper hand, having outscored London, Tokyo, and New York on the first day of competition. Archive photo via Mike Lewis/Ola Vista Photography

The 2021 ISL League Final is here! Energy Standard, the Cali Condors, the London Roar, and the LA Current will once again battle for the league title.

Cali didn’t have Caeleb Dressel in Match 6, but several key Condors contributed to the team’s victory, including Kelsi Dahlia and Beata Nelson (Pictured).

Energy Standard holds the top 3 spots in this season’s ISL MVP rankings, with Sarah Sjostrom and Siobhan Haughey figuring to battle for the season MVP.

On day 2 of Match 8 of ISL Season 2, Cali has the upper hand, having outscored London, Tokyo, and New York on the first day of competition. London is close behind with only 8.5 points to make up the difference.

One early opportunity for London to catch up to Cali will be in the women’s 100 backstroke. Roar’s Kira Toussaint has been solid in the event this year, winning both times that she has swum it so far. Toussaint has been a 56.24 in the event this season, while Cali’s Olivia Smoliga‘s fastest so far is 0.01 faster with a 56.23. In what will be a tight race, the two double winners so far this year, Toussaint and Smoliga will go head to head to give their team a leg up.

Later on, the men’s 100 IM will be a showdown between Caeleb Dressel for Cali, Michael Andrew for New York, and Vlad Morozov from the Toyko Frog Kings. The three faced off yesterday in the 50 free as Dressel came out on top, with Andrew coming second and Morozov coming third. As for the IM, Dressel has 2 wins so far this year, Morozov has 1 win and a second place, and Andrew has yet to win the event, having finished second both times he has swum it. All three of them are sure to bring the IM firepower this morning, making for a great race.

In the 400 IM, Tokyo has been dominant thus far, winning both the men’s and women’s events every time they have raced it so far. Today, Yui Ohashi, Sakiko Shimizu, Kosuke Hagino, and Tomoru Honda will all race it for their third time each and will try to secure Tokyo with the victory as they try to move up in the team standings.

The session will end with a breaststroke skins race for both the women and the men, picked by Cali and London, respectively. The women’s race will feature a rematch between Condor Lilly King and London’s Alia Atkinson following their battle in the individual 50 breast yesterday where Lilly King took the top spot. As for the men, Adam Peaty will get his first shot at the skins event as he goes up against the likes of Vlad Morozov, Michael Andrew, Nic Fink, Kirill Prigoda, James Wilby, Yasuhiro Koseki, and Caeleb Dressel, runner up of Match 4’s breaststroke skins race.

Follow along with our live recap of the session here.