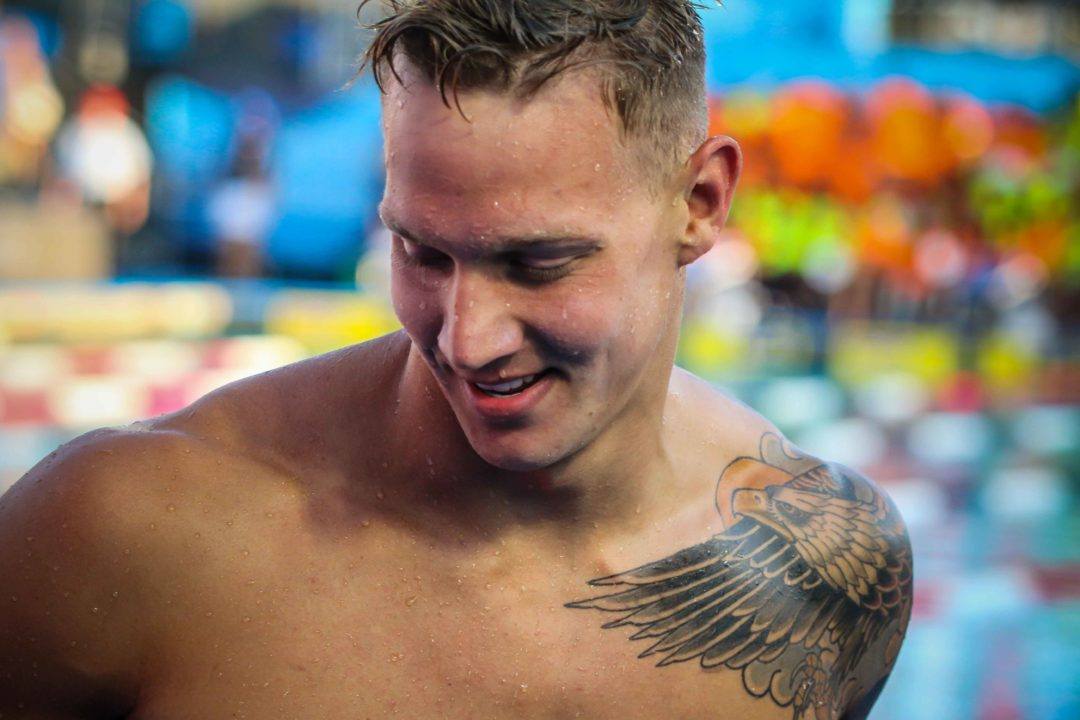 Dressel's 48.63 in tonight's 100 free was his 5th fastest in-season swim ever, and the fastest he's ever been at this point in a season. Archive photo via Jack Spitser/Spitser Photography

The 2020 Florida OT Qualifier concluded on Monday night as Caeleb Dressel picked up a win in the 100 free. Dressel, the American Record holder and 2-time World Champion, swam a 48.63 to dominate the race. That’s his 5th fastest in-season swim ever, and the fastest he’s ever been at this point in a season. Dressel also swam the 200 IM prelims, cruising to a 2:05.63, but scratched out of the final. Fellow Gator postgrad Ryan Lochte went on to win that race. Lochte finished in 2:00.05, about a second off his season best 1:58.89 from the U.S. Open in December.

That pic really shows how streamlined Dressel’s head is.

Dressel is washed up. Chalmers was 47 a month ago. Dressel was lucky last year Chalmers was still coming back from surgery but this year he just wont be able to hold off the true King Kyle.

Until Dressel wins gold in the 100 at the Olympics, yes the king is Kyle.

So is Joe Schooling still the king in the 100Fly?

All depends on how hard Sergio pushes him in the next 6 months. If he can go below 50 sec then he has a slim chance.

I’m not sure it depends on Sergio.

Usually 6 months of good work out of 4 years pans out well.

Then Mel has had to much Texas Tap Water.. 😉

Who is queen of the 400 Free? Is it Queen Kate or Queen Ariana, just because she won the last time they met & is the up & coming. To me even as an Aussie, it’s always Queen Kate.

Those pesky individual event Olympic golds always get in the way of a good story.

Just keep this guy away from a motorcycle please!

Dressel will be one of the best swimmers in this Olympics. You will eat your hat if you say otherwise!

Geez. He’s slipped down from the GOAT argument, to winning 9 golds, to now just “ONE OF the best swimmers in THIS Olympics”? Geez, by the time Tokyo comes around, he’ll be a relay-only swimmer.

Yeah I noticed that too

The dangers of extrapolation ….

Yes, but he is not receiving the same yardage dosis that Troy is giving Dressel. Not to mention 200 swimmers and up tend to swim better in-season than sprinters. Sprinters tend to have a better taper

I don’t understand how you could possibly know that. Chalmers trains for the 200 and having seen the man train before I can tell you that he is an absolute monster who regularly hits 7500m LCM sessions. Not saying Dressel doesn’t do that although you would think with how they swim their races (Dressel with front half speed, Chalmers back half speed) people would be more inclined to say that Chalmers is “fitter” or does longer training, but then again this is a largely American site

And then gets beat by Caeleb…

This is some total 💩 right here.

Thank$$$ are you kidding me?!?! King Chalmers has been posting his workouts eventually and he was dropping a couples of 100×100 a week back in December/January.
I appreciate the American patriotism but let’s be real people, 48.6 is not special in any time of the year, that’s not the 80s anymore.

I mean, but to that end, dropping high 47s isn’t special anytime of the year either…since we’re still a sport of world records and gold medals (hold overs from the 80s and before), literally the only times that matter are the ones that break those records or win those medals regardless to the “time of the year.”

Chalmers swims faster in season. Dressel drops more in taper…a 48.6 is pretty exciting for one of them, just like a sub 48 is exciting for the other. Both can be “special” in context

The Baron Chalmers is a better in season swimmer, but it should be a tight race between the two

Baron, normally 18 year Olympic champions are known as King, the only other King in the 100 free still swimming is Adrian.

King Prince Duke Marquess Earl Viscount then Baron . Cannot see why you have dumped him to number 7 . Not very Justinian at all !

Way to go out on the limb, seeing as there was that whopping 0.12 sec gap at Worlds.

Dressel is known to have larger drops with taper so they’re looking pretty even so far this early into the season.

We’ve all heard the set where Dressel swims multiple 400’s LCM kicking out 15 yards off each wall. Can’t remember the interval but it was impressive.

48.6 is really fast for February. He’s going to break 47 again this summer.

it might be because of the people knowing troys hard training, therefore being able to somewhat judge how good the times of his swimmers really are

he will obviously break 47 at least one time this summer ….

We are well into February lol

Oops, I shouldn’t post after 8pm I guess. xD

Yeah its a good time but more importantly how did his abs look?

The abs were still hibernating through the winter.

You seem fixated on his body.

Haha, don’t hate on me for pointing out the stall references.

At the TYR photo shoot last week the dad body had gone away a bit. Looking like he’s in good shape. 2:00 in season is encouraging too.