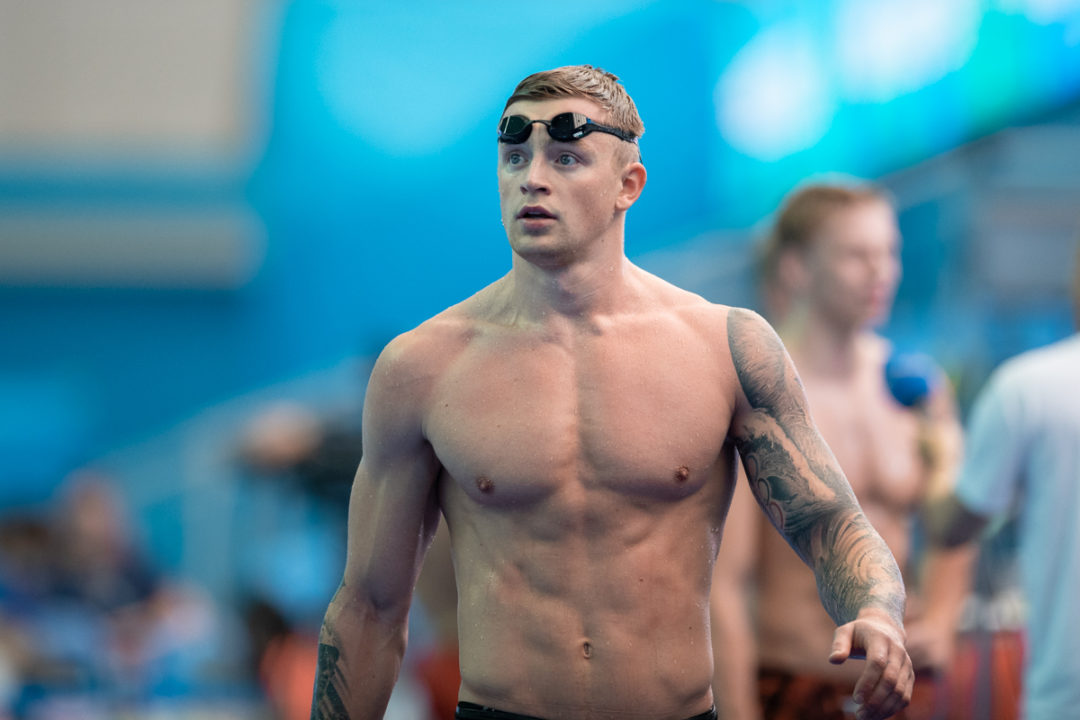 Breaststroker Adam Peaty is set to take on the 50m, 100m and 200m events in Bangor this weekend, where the McCullagh Int'l finals take place in the morning. Archive photo via “Rafael/Domeyko Photography”

The 2020 McCullagh International Meet is set to take place this weekend, with talent from across Great Britain descending upon the Aurora Complex in Bangor. The annual memorial meet named for the Irish Amateur Swimming Association’s first director, Dave McCullagh, who lost a battle with cancer in 2002.

In the past, we’ve seen the Irish elite lead the pack, but this time the usual suspects of Shane Ryan, Danielle Hill, Brendan Hyland, and Mona McSharry will meet their matches with visiting stars Adam Peaty, Luke Greenbank, Hannah Miley, and Siobhan-Marie O’Connor.

With the British Championships and Irish Open Championships are each set for April, with the meets representing the respective nation’s sole qualifying opportunity for this summer’s Olympic Games in Tokyo. As such, this McCullagh International Meet offers a valuable opportunity to shake out some racing nerves and fine-tune some strategies just 2 months out from the qualification competitions.

Additionally, this meet has situated its finals to take place in the morning, mimicking the timeline involved at the Olympic Games in Japan. That means racers here will get a taste of what Tokyo may bring in terms of timing reversal between usual morning prelims and night finals.

Adam Peaty is indeed entered in this event, seeded as the #1 swimmer with a time of 2:07.12, which is a bogus effort considering the British national record sits at the 2:07.30 Ross Murdoch planted at the 2014 Commonwealth Games. 25-year-old Peaty is Britain’s 5th fastest performer ever in the 200m breast, holding a PB of 2:08.34 from the 2015 British Championships.

Although Peaty has been entered in the 200m breast at other long course meets, the most recently registered official time for him is represented by the 2:16.62 he posted at the 2017 Manchester International Swim Meet.

However, Peaty has done damage in the short course format, clocking 2:04.63 for a new personal best at the International Swimming League (ISL) London meet.  That translates to a LCM mark of 2:08.62 using SwimSwam’s Speedo time converter.

Sprint backstroke specialist Shane Ryan will look to top the podium here in the men’s 100m backstroke, but Luke Greenbank will be ready to challenge, having just come off the BUCS Long Course Championships.

There in Sheffield over the weekend, Greenbank posted a winning time of 55.51 to get his 2020 year started. In 2019, Greenbank busted out a time of 53.75 in the semi-finals at the 2019 World Championships for a new lifetime best, rendering him 14th overall.

Ryan owns the top-seeded time of 51.46, which is another unofficial mark. Ryan owns the Irish national record in his lifetime best of 53.73 put up in Dublin last year. He dropped the 100m back event in Gwangju to focus on Ireland’s medley relay there.

The Olympic silver medalist from Rio, Siobhan-Marie O’Connor, is set to contest this 200m IM event, fresh off an intense three-week schedule at altitude in Flagstaff, Arizona. She will be facing Aimee Willmott, 3-time Olympian Hannah Miley, as well as recent BUCS winner Abbie Wood.

Wood posted a near-lifetime best in Sheffield last week, while 15-year-old Katie Shanahan of Scotland is also pushing boundaries by firing off age records as of late.

For O’Connor, however, she says that McCullagh is one of her ‘prep competitions.’

“That should be fun, it’ll be interesting and really good to get a practice of doing that for if we hopefully qualify.

“It’s just about a lot of really hard training, trying to get in the best shape possible for April, because everyone is going to be on their game.

“It’s going to be really hard to qualify for the team – but I’m excited about it.” (British Swimming)

Although the top contenders of the women’s 100m breast seem rather spread out on paper, the competition may wind up faring much closer once the swimmers enter the water.

24-year-old Molly Renshaw leads the pack with a time of 1:06.73, but O’Connor will be chasing gold in this event as well. Training partner Sarah Vasey will be in the mix, along with Irish standouts Niamh Coyne and Mona McSharry.

No British woman ranks among the top 25 performers this season, which means the nation has some catching up to do in terms of confidence-boosting for April.  The 2019 British Championships saw Jocelyn Ulyett take the gold in a time of 1:07.35, while 18-year-old Tatiana Belonogoff reaped silver in 1:07.61.

Belonogoff has since pursued Russian sports citizenship, while Renshaw finished 7th in Gwangju last year in a time of 1:06.96.

Although Duncan Scott enters McCullagh as the top-ranked swimmer with a time of 52.25, there is no clear-cut favorite for this men’s 100m fly race.

Scott certainly shouldn’t be ignored, with his seed time representing his personal best, a mark that renders him Great Britain’s 6th fastest performer ever. But, Irish national record holder Brendan Hyland will be trying to take the gold on his home turf, while Bangor’s own Jordan Sloan will also be gunning for the podium.

Not to be missed is young Edward Mildred, just 17, from Northampton. Mildred finished 4th in the 200 fly event at the 2019 European Junior Championships but split 49.97 on the men’s 4x100m free relay to show the kid’s got some speed. On the fly leg of the prelims medley relay there in Kazan he checked in with 54.85.

This year, Mildred has already established a new lifetime best of 54.22 logged just last month at the NASA County Championships.

Glad to see Peaty in 200 breast. I’ve always wondered why he has avoided that event at big meets since 2015 British Champs.

Again thinking about relay spots I’m excited for the women’s 200 free as there are a lot of Brits hovering around the 2 minute mark and it would be good to see a couple go under 2 minutes.

Excited to see how Scott does with his stronger events especially after the 48.53 relay opener.