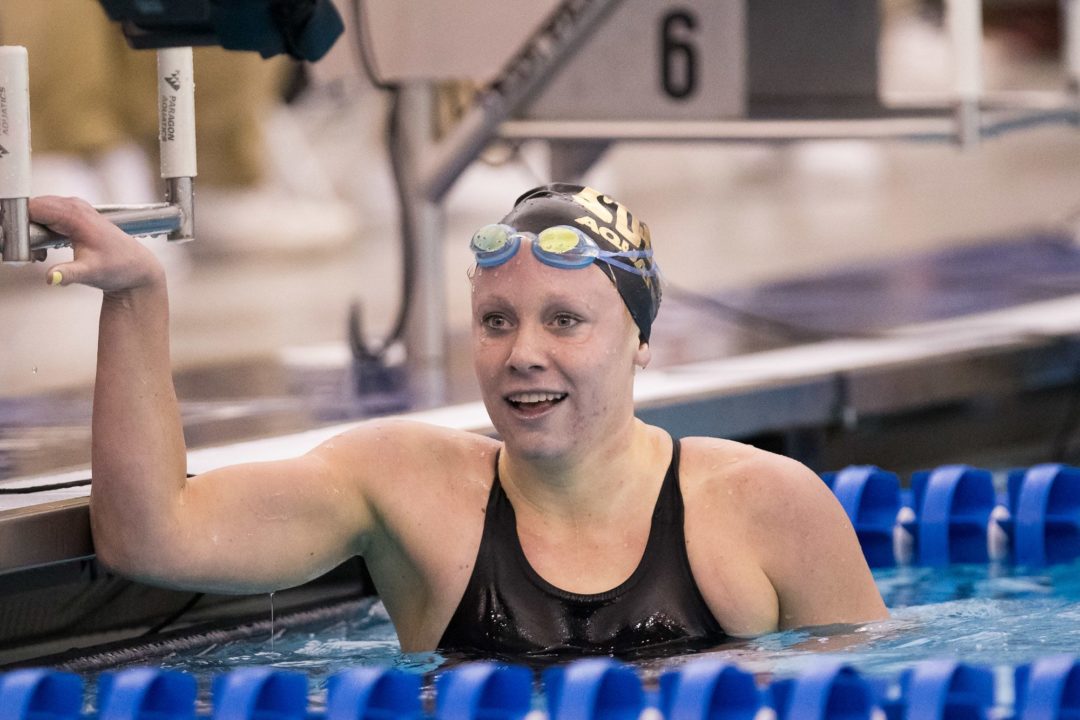 Crean Lutheran's Ella Eastin is among the swimmers who should contend for California's first high school swimming state titles in 2015. Archive photo via Tim Binning/TheSwimPictures.com

Editor’s note: there are still more details to be tracked down, including confirmation that all sections will be participating and factored into the ‘top 8 average.’ We will provide an update when we receive those details.

Last October, SwimSwam reported that the California Interscholastic Federation (CIF)  was considering a single state swimming championship (see article here).  It appears the CIF has approved the meet, beginning in 2015.

California high school athletics is broken into 10 largely independent sections.  Today, each section holds its own championship meet at the end of the season.  The date for the first California High School State Swimming Championship next year will be May 22 and 23, 2015 one week after the completion of the last section championship.  (Note: I’ve not yet confirmed that all sections have adopted the meet, only that some have).

Initial details indicate that swimmers will qualify to swim in the state meet in one of two ways: Automatic  Qualifiers, and At-Large Entries.

But as there is no swimming state championship history from which to draw, the first year at-large entries will be based on the average 8th place time from each of the 10 CIF section championships.  This could lead to a very large meet in 2015.

How many swimmers in 2015?  A Back of the Envelope Calculation

While attempting to moonwalk away from the complete accuracy of the research and calculations performed, I wanted to try to get a sense of just how many swimmers there could potentially be involved in a 2015 State Championship with the rules as currently understood.  In track and field, it’s the runner’s time in the section championship meet that determines if the athlete meets the qualifying standard for an at-large bid to the State Championship.  Using this same assumption, and using the 8th fastest overall time across divisions within a section, I put together the following table for how many swimmers would have qualified for the men’s 200 free in 2013 (note, I was unable to find results for two of the sections, and there may be a second swimming division in the central section that I was unable to confirm):

In a state where a little more than 20 kids turned in a sub 1:40 200 free at their sectional championship meet, a 1:46.7 would have been fast enough to earn an at-large bid based on the average 8th place time across sections, and ~150 swimmers met that standard.  In terms of number of swimmers, 2015 has the potential to be a very large meet.

Some Additional Observations and Opinions

California high school swimming runs in a different cycle than high schools in most other states.  In part because almost all CA swimming takes place outdoors, a Spring championship is more likely to be swum in good weather than it is in the Fall or Winter seasons (Note: the CIF Northern Section runs a Fall swim season, and is the lone CIF section that does).  But, the downside is that a late May finish makes for a very short long course season for California high school swimmers.  A state meet after sectionals extends this problem (ala the “Masters” meet issue).  Next year, this will be an extra weighty consideration for the best of the California high school swimmers as 2015 is really the last full long course season to achieve an Olympic Trials qualifying time for 2016.

Seven years ago, the CIF introduced a California State Championship in football.  At first, it seemed like a bonus game after the section championships, but now it’s an integral and exciting part of the CA high school football season.  During the seven years since its inception, the CIF has shown to be very willing to continue to improve the format year after year.  Here’s to hoping the CIF will approach the state swimming championships in this same spirit.  This meet has the potential to become the Mother-of-All high school swim meets.  If this SwimSwamer had a vote, I’d vote to flip the water polo and swimming seasons, making swimming a Fall sport and Water Polo a Spring sport…I might also consider a more rigorous at-large standard in the first year.  But in the end, it will be great fun.

A copy of the proposal as voted upon in February can be found here:

Nice piece Dean. Question that has come up in CA State football and basketball championships is location. There is North-South rivalry and the issue of “home field advantage” based on location of the Championships. Any word on where the Swim Championship will be and the possibility of site rotations on various years?

LOL Programhere! Yes, the location of the state championship football and basketball games has been controversial. So far, every football championship game has been played in Carson in Southern California. Lots of interesting and funny stories about all of that. Next year, I believe, the football game will finally come north.

As I currently understand the swimming championships, at least initially it will be a bid situation, with different locations submitting offers. This is, as you know, the story about why every football state championship so far has been held in Carson — They submitted the low cost bid — Multiple times.

Hopefully they won’t use the USA Swimming people who man the computers for the Los Angeles Section. The above link states that all times have to come from electronic timing systems – no watches. The computer personnel at a previous CIF-Los Angeles semi-final meet didn’t like the electronic time or the pickle times or the watch times, instead they asked a swimmers coach what time she had for her swimmer and then changed the athletes time by over 3 seconds for the 100 breast. This change guaranteed this athlete a spot in the finals (by the way this athletes club coach IS a swim official). The athlete who earned the spot in finals got knocked out due to this scum.… Read more »

The final was a week after the semi-final so there was plenty of time to address the problem. There were even two free lanes available in the final and consolation final (6 swimmers in each using an eight lane pool). The LSC Chair (Marshburn) and the LSC Review Chair (De Armas) were contacted but said they couldn’t do anything to help. Bolton was contacted (since her name appeared on the CIF meet sheet)(also, the PAC 10 meet sheet). Bolton said the computer automatically changes the time, but others have said that times are changed manually. The literature states that times are changed manually. They all had a chance to acknowledge the FACT that an error was made and rectify the… Read more »

CA has basically no suitable indoor pools at this time to host a major championship meet in winter. I don’t see the season changing.

As for the switch from SCY to LCM for club season, it’s not like there will be that many high school age kids in serious contention for an Olympic spot. ..

They could host it at the East Los Angeles College pool, they host many major club meets their since Belmont closed.

CIF tried to combine all southern sections by making a CIF Masters meet but it did not workout well.

It will be interesting to see if the top CA swimmers and top club coaches buy in and see this as a benefit. They already have their LCM season cut down to a two month max training phase if they rest for HS Sections. With 2015 & 2016 setting up the Olympic Trials run, would this really be a benefit to the top kids in CA?

Suggestion: take the winners of each section and the next fastest swimmers for a total of 40 swimmers per event. Maybe 24 for relays. Seems simple…5 heats of individuals and 3 heats of relays. I like the idea of a fall season.

Flipping the seasons is the most logical move. But it is then a territorial battle and polo will block that from happening if they can. They rely heavily on recruiting the best incoming frosh swimmers as school starts and they indoctrinate them into how they will become stars. Polo is clearly more fun, swimming loses many this way on a regular basis. They then lose their fitness and don’t come back to club swimming. This is fine for many, but we lose the late bloomers in a long term development model.
Most club coaches would not mind “losing” them to hs polo if it were a spring sport as they would be more likely to return.
Tough dilema.… Read more »

Thanks for this. I should have thought to look there. Between prelims, finals, and consolation finals, it looks like the 8th fastest time in the LA City section was about 1:51.28. Without going back to hand count all the section results again (CA HS swimming needs what CA HS track and field has, Dystat to keep all the times in a single data base), the LA City Section 8th place time will have the net effect of making the at-large qualifying time a little slower, allowing more swimmers into the meet. I suspect the results from the Oakland Section (It is a very small section with only about 8 schools)… Read more »