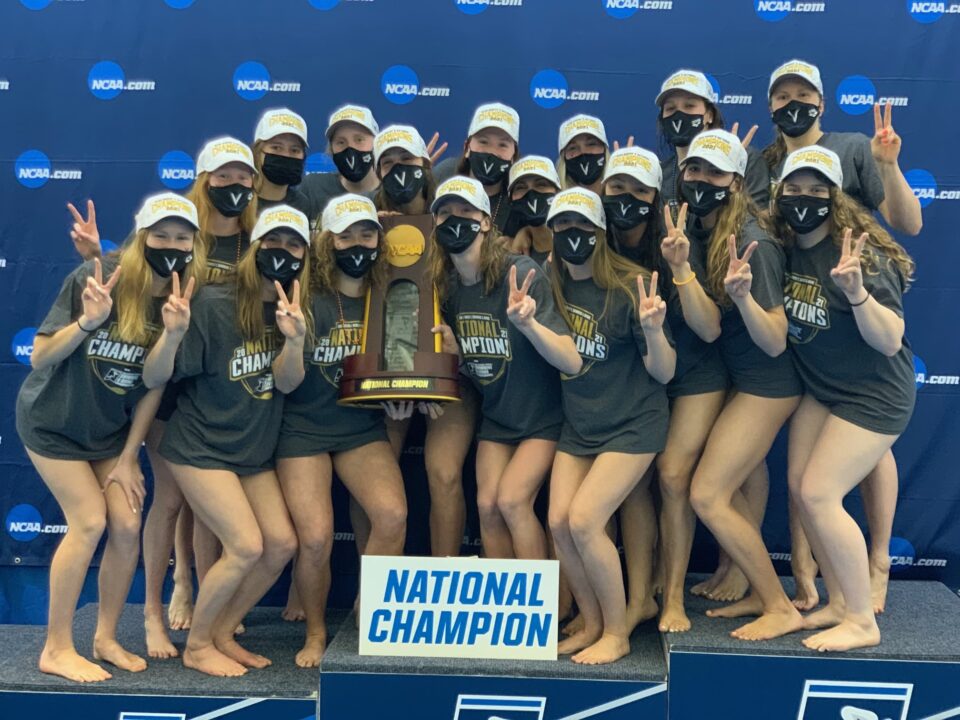 According to the psych sheet, Virginia is projected to defend its NCAA title. Stanford is seeded for a 2nd place finish after finishing 9th last year. Archive photo via NCAA

The 2022 Division 1 Women’s Swimming and Diving Championship begins on Wednesday. Virginia is projected to defend their NCAA title with another dominant performance. Let’s take a closer look.

Note: psych sheet scores do not factor in diving.

Despite the competition this year becoming much deeper, based on the psych sheet, it looks like this should be a slam dunk for the Cavaliers. Last year, Virginia led the meet from beginning to end, and it’s projected to happen again. In 2021, Virginia won by 137 points over NC State. This year, without the diving factored in, the Cavaliers are expected to top Stanford by 123.5 points, which should be enough for Virginia to secure a fresh set of hats and t-shirts.

Stanford has made a huge jump in the seeded scoring compared to last year when the Cardinal finished 9th. A reloaded team with Olympians has them back in the NCAA title conversation after winning three consecutive team championships in 2019, 2018, and 2017.

From the psych sheet, it appears that there will be a close battle for 3rd between NC State and Tennessee. The Vol’s are projected to be in 2nd place during days 2 and 3, until falling to 4th during the last session of the meet. Based on previous years, Tennessee is usually seeded high at the NCAA Championships, but often adds time and falls in the rankings at the NCAA Championships.

NC State is projected to bring in enough points during the 200 breaststroke and 100 freestyle to pass Tennessee for 3rd.

Despite Texas being projected to finish 7th, the Longhorns will be in the conversation for 3rd because of their diving program. Also, their distance group should have big drops waiting for them in Atlanta.

You guys/gals really need the meet to start😂😂😂

Super cool graphics! Thank you! It’d be nice if they would show 3 sets of scores and team recognition at the end of the meet, swimming, diving and swimming with diving. Wouldn’t it be nice to recognize the best diving team in the NCAA, and so on..

Diving should be it’s own sport anyway