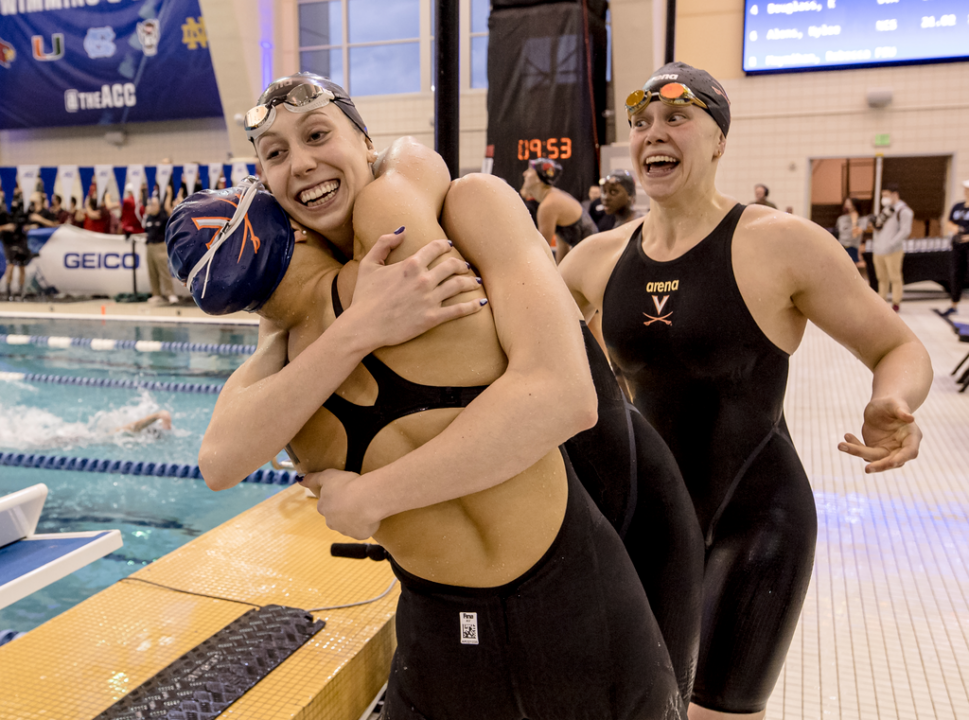 After swimming the fastest time in history at ACCs, the Virginia women are set up for a clear victory in the 200 free relay at NCAAs. Archive photo via Matt Riley – UVA Communications

The 200 free relay has been dominated by Cal in recent NCAA history, with the Golden Bears having won five of the last six championship titles in the event. The team’s lone loss during that span? A mere .07 defeat at the hands of rival Stanford in 2018 – a year where the Cardinal iced arguably the best team in collegiate history.

The Bears, who have now won the event two seasons in a row, will be hard-pressed to make it a three-peat in 2022. The reason? Likely the best team we’ve seen since that 2018 Stanford team: the 2021-22 Virginia Cavaliers.

UVA pushed Cal all the way to the wall last season, with the Bears winning by a tight margin, 19 one-hundredths, thanks to a trio of 21.2 splits on their final three legs. But the Cavs have exchanged out their slowest leg last season (21.97) with freshman Gretchen Walsh, who has been red-hot this season and is now one of the fastest swimmers in history.

At the ACC Championships last month, Walsh teamed up with the three returning swimmers from last season’s runner-up team at NCAAs, Kate Douglass, Lexi Cuomo and older sister Alex Walsh, and the quartet put up the fastest time in history of 1:24.47.

With G. Walsh clocking 21.04 to take a close second to Douglass in the individual event, the Cavs have two of the four fastest 50 free swimmers in history, and appear well on their way to a decisive title victory in the event.

Over the last 10 NCAAs, the margin of victory in this race has been 66 one-hundredths or less nine times, with the one outlier being Cal’s 2019 victory when they set what is now the previous U.S. Open Record of 1:24.55 and beat Michigan by 1.70 seconds. Removing that one race, the average margin of victory has been just .33 in the event (.47 including it). But this year, it seems another massive gap between the top two teams is imminent.

Virginia’s all-time record of 1:24.47 ranks them close to two seconds clear of the next-fastest team this season, which is Alabama’s 1:26.38 from the Tennessee Invite. The second-fastest team behind UVA during conference meets was NC State, which raced the Cavs head-to-head and was beaten by over two seconds (1:26.51).

As you can tell from the seasonal rankings, the race for second is relatively wide open.

For Alabama, Morgan Scott was nearly four-tenths quicker in the individual 50 free at SECs than she was leading off this relay, and despite the fact that they were nearly six-tenths slower in the relay compared to their invite time, they still won the conference title and appear to be a solid bet for the runner-up spot.

Cora Dupre and Kalia Antoniou are reliable 21-mid legs, and Kailyn Winter has proven herself with back-to-back sub-22 splits at both the Tennesee Invite and SECs. (With Gretchen Walsh absent, the Crimson Tide actually beat UVA head-to-head at the Tennesee Invite back in November.)

NC State was right in the battle last season and ultimately took third, and though they lost a 21.4 leg in Sirena Rowe, Heather Maccausland stepped in with a 21.9 split at ACCs. Katharine Berkoff‘s freestyle has noticeably improved this season, and Kylee Alons has always performed on relays. Sophie Hansson is also a consistent 21-mid-to-high swimmer with a takeover, which is a rarity for a high-end breaststroker.

The other two schools sub-1:27 this year, Stanford and Michigan, are constructed similarly, with one bonafide star apiece and some other swimmers capable of big relay swims.

The Cardinal are spearheaded by Torri Huske, who was 21.43 leading off at Pac-12s, and Taylor Ruck was the exact same time with a takeover swimming second. Anya Goeders has been 21.89 flat-start this year, and freshman Amy Tang, who split 21.97 on the relay shored up the lineup last month.

The Wolverines have Maggie MacNeil, a premier title contender in the individual 50 who anchored in 21.01 at Big Tens and has been 21.32 flat-start this year. Freshman Lindsay Flynn is developing into a top-tier sprinter, and Claire Newman split 21.5 at Big Tens. Considering Michigan placed 16th out of 18 teams last year, they appear well-positioned for a top-eight showing here, though Newman and Natalie Kan will need to be at their absolute best to do so.

The remaining teams in the seasonal top-10 are Lousiville, UNC, Tennessee and Mizzou. The Cardinals and Tar Heels both have four solid 21-high swimmers, while the Vols and Tigers are a shade off with one 22+ leg and no clear star to mitigate the deficit that creates.

And then there are the defending champs from Cal, who haven’t shown us their full hand this season, but it is concerning that their fastest swimmer this season comes in at Elise Garcia‘s 22.20. They do have their entire winning roster from last year, which also includes Eloise Riley, Emily Gantriis and Izzy Ivey. Ivey was their fastest split (21.60) en route to a 1:27.84 relay at Pac-12s, and if they hit a good taper, it seems as though they can be somewhere in the 1:26s.

The Bears should be in the battle for second, but that’s the only real battle that will be going on in this race with UVA so far in front.

Note: SB add-up includes the four fastest flat-start times from the team’s swimmers this season. This may not be indicative of a team’s ability in instances where a swimmer who is used on the relay doesn’t swim the 50 free at a taper meet.

i’m a 44 year old man that is more into NCAA swimming than any other sport. Yes, there is something wrong with me.

Anyway, the 50 free will be a dog fight between McNeil, douglass, and G walsh.

Except Douglas isn’t swimming the 50 free.

my bad. I thought she was. derp

Chris, I feel the same way, and I’m about a decade older than you! Can I just comment on that Gretchen Walsh 20.58 50 free split?!? I’d love to swim that fast just once in my lifetime. I don’t need any records or medals or an audience – it would be amazing just to know what it feels like to swim that fast. Can someone please invent such a virtual reality for us aging swammers? Anyway, I’m looking forward to watching the event from the safety of my suburban sofa, LOL.

You can! Most college teams use cords that you tie around your waist. You hold onto the wall in the water on an end lane while your partner walks to the other side holding the other end of the cord. Then you swim while they pull you. You just need to find a partner and get that piece of equipment. I think I hit a 7 in a 25 a couple years back

i hear you. I still swim actively and every time I go sub1:05 in my 100 IM from a push, i think to myself “There are non-elite female swimmers that go much faster in practice” and I come back to earth.

It’ll be interesting to see if they are able to go even faster without open water next to them this time.

I wonder if Stanford will use swimmers like Crage, Crisera, Wheal, and Goeders on their lineup? Torri 4×100/200, medley relays…

It would be shocking if UVA lost this relay. They have two solid sprinters and two elite sprinters. Thats tough to match. Second will be interesting but predicting NCST as fifth is a little low and outside–ball. McCausland was 21.3 last season and should be better at NCAAs than her 21.9 at ACCs. And I am guessing Alons comes alive this week too.

I agree with your overall point, but . . . A-Walsh split 21.0 last season. You’re saying that’s a “solid” and not “elite”? And Douglass/G-Walsh aren’t just elite. They’re literally among the top 4 swimmers in the history of swimming. And when you’re slowest leg, Cuomo, goes 21.8 flat start … that speaks to your relay quality.

I would be amazed but not *that* surprised by a 1:23. Truly crazy to think how close they are to averaging 20-points.