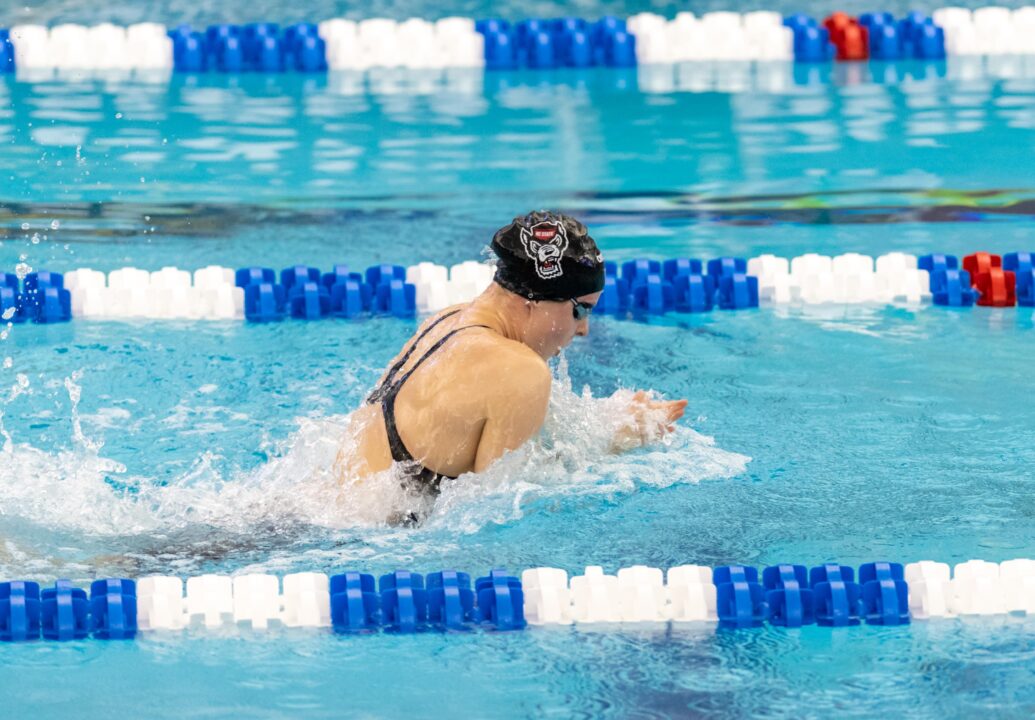 Hansson and Wenger are now the #3 and #4 performers all time in the event, right behind Tennessee alum Molly Hannis. Stock photo via Luke Jamroz Photography ©

Hansson, now a senior, enters the 2022 NCAA Championships not only as the defending champion, but the top seed as well. Impressively, Hansson has already been half a second faster this year than the 57.23 she swam to win the NCAA title last year. She’s not alone, however, as Virginia senior Alexis Wenger is also well under the Hansson’s winning time from last year.

The race is shaping up to be a rematch of the ACC Championships A final last month, where Hansson and Wenger went head-to-head in an absolute barn burner. At ACCs, Wenger led at the 50 mark, 26.62 to 26.68, but Hansson came home 0.10 faster, finishing in 56.72 to Wenger’s 56.76. The performances were huge personal bests for both swimmers, and both were under the ACC Record as well.

Hansson and Wenger are now the #3 and #4 performers all time in the event, right behind Tennessee alum Molly Hannis, who holds the #2 position at 56.64. Notably, Hansson and Wenger enter the meet in a tier of their own, having been half a second faster than the next-fastest swimmer in the NCAA this season. Another thing to keep in mind: last year, Hansson won the event of course, but also improved on her seed time at NCAAs, while Wenger finished 3rd with a slower time than she went at ACCs last year.

Texas sophomore Anna Elendt swam exceptionally well at the Big 12 Championships, breaking the Big 12 Record in the 100 breast. Elendt swam a 57.35, making her the #8 performer all-time in the event. Even more impressively, Elendt swam a 56.42 on Texas’ 400 medley relay at Big 12s, which is a faster relay split than either Hansson or Wenger has ever swum. In fact, only NCAA Record holder Lilly King has been faster on a relay than Elendt was at Big 12s. Given the split, it at least appears possible that Elendt could swim a 56-point flat-start.

USC sophomore Kaitlyn Dobler is another all-time top 10 performer in the event. Dobler won the Pac-12 title in the event a few weeks ago, swimming a new personal best of 57.31. That time makes Dobler the #3 seed for this meet, and she’s the #7 performer all-time. Dobler finished 2nd at NCAAs last year and did so with what was a personal best for her at that time (57.46).

Tennessee’s Mona McSharry (sophomore) finished 4th last year in 57.80. Like all of the swimmers previously mentioned, she’s already been faster this year, having swum a personal best of 57.46 at the SEC Championships. McSharry has been swimming fast all season, even winning a Bronze medal at the FINA SC World Championships in Abu Dhabi in December with a new Irish Record. Sophie Hansson was also in the race, winning Silver.

Ohio State junior Hannah Bach is another A finalist from last year who is back in the fold this year. Much like seemingly everyone else in the field, Bach swam a personal best at her conference meet last month, posting a 57.61 to win the Big Ten title. Bach finished 5th last year (57.94), dropping time from her conference performance.

Georgia sophomore Zoie Hartman took 6th in the event last year and is literally the only swimmer seeded in the top 10 who hasn’t swum a lifetime best in the 100 breast this season. We could look at that as a negative, but Hartman swam her personal best of 57.40 last year, a time which without a doubt would be fast enough for an A finals appearance this year.

Another NC State senior, Andrea Podmanikova, is a returning All-American in the event. She took 7th last year, swimming a 58.62. Podmanikova dipped under 58 seconds for the first time in her career at ACCs, taking 3rd with a 57.90. She was slower at NCAAs than ACCs last year, but with a 57-point best time, Podmanikova is certainly a threat for a high finish in this race.

Sophie Angus is the final A finalist from last year’s NCAA, having finished 8th last year. The Northwestern 5th year is seeded 12th in the event with her season best of 58.78, which she swam at the Big Ten Championships. Her season best is just off her lifetime best in the event, which stands at 58.59, the time she swam in prelims of NCAAs last year to get into the A final.

Angus is one of a trio of the Northwestern swimmers who could finish in the top 16 this year. Senior Tara Vovk has had a breakthrough season, getting back under 1:00 for the first time since 2019 this fall, then lowering her time all the way down to 58.52 at the Big Ten Champs. Vovk is the 10th seed, and if she continues swimming best times, like she has all season, she could very well end up in the A final.

Hannah Brunzell, a Northwestern junior, enters as the 17th seed in the event with the 59.11 she swam at Big Tens. Brunzell won the B final at last year’s NCAAs, swimming her personal best of 58.50.

Alabama freshman Avery Wiseman is another swimmer to keep your eyes on. Wiseman swam a head-turning 57.79 at the mid season, a time which has her seeded 7th for NCAAs. She was off that time at SECs, clocking 58.73, but for all we know she may not have rested much for the conference meet. If that’s the case, Wiseman would be primed for a big swim in Atlanta.

Darkhorse: Klara Thormalm (San Diego State) – Thormalm is a 5th year with the Aztecs who has qualified for NCAAs in 2019, 2020, 2021, and now 2022. Thormalm was a B finalist int he 100 breast in both 2019 and 2021, winning the B final in 2019. She came in 11th in the event last year. Given her experience and consistency in the event, it’s absolutely possible that a good prelims performance could put Thormalm in the A final in her final NCAAs.

I don’t think Wegner will have the juice to beat Hanson. Sophie loves to win this race.

Her name is Wenger