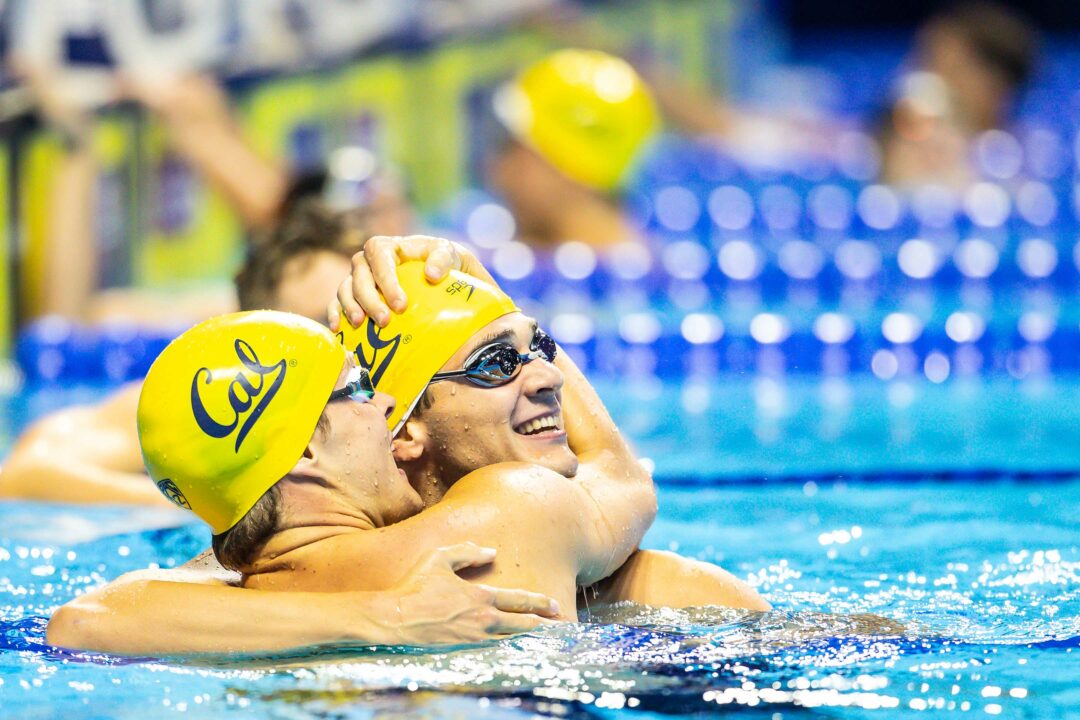 At the 2022 NCAA Men's Championship, Cal is projected to win by 7.5 points over Texas. Check out this data visualization of the scored psych sheet. Archive photo via Jack Spitser/Spitser Photography

The 2022 Division 1 Men’s NCAA Swimming and Diving Championship is just around the corner. The team score battle is going to be razor thin, so let’s take a closer look.

Note: the psych sheet does not account for diving points

By just looking at the overall projected final score, it looks like another Texas versus Cal showdown, but after taking a closer look at the numbers, Cal won’t take the lead until the 400 freestyle relay, the last event of the meet.

Per the psych sheet, Cal’s margin of victory is only 7.5 points over Texas. If the Longhorns are swimming lights-out, there could be too much of a gap for the Golden Bears to close in the 400 freestyle relay. Texas also usually saves its best performance for the NCAA Championships, which wouldn’t be reflected on the psych sheet.

Cal winning this meet hinges on the team’s ability to execute in the 200 backstroke during the final session of the meet. If the Golden Bears can lock in multiple A-finalists, that might be enough momentum to bring a first place trophy back to Berkeley.

Very cool motion graphic! What would make it perfect is those missing diving points splashing in from above! SwimSwam certainly knows how to spin up the comments from the DiveDove crowd too. Hook ‘em Swimmers and Divers!

Sarah ROCKS, this is the best visualization of a Championship swim meet I have ever seen!!
Bring on the Women next, please!

I see what you did there…

No question about including field results with track times in coming up with a champion. Track event results can be measured to quarter inches, just as track and swimming events results are measured in fractions of seconds. Diving results unfortunately have a significant degree of subjective judgement. To me diving is unrelated to swimming and really deserves a separate championship, like gymnastics which is its much closer discipline.

I’ve coached in swimming, diving, track and field. All swimming strokes use a dive to start each race – and divers have to swim to the side after each dive! Never the two shall part… Hope Cal always shuns diving.

So I guess you are not going to the 2022 NCAA Track and Field Championships?

I think Cal still has a shot at winning, even with diving. I looked over the psych sheets again and I think Cal has more opportunities to improve from seed than Texas does. Texas also has some pretty bad luck, with their better events (IMs and 50/100/200 free) being really crowded with swimmers from noncontenders. It will take some historically fast times to final in sprint free this year, so Kibler and Krueger need to be on point. If they can slip those 2 and Auchenie in it would be huge, but it’s also possible at least one ends up in the B final or missing a second swim altogether, which would be disastrous.

Lots of ways Texas and Cal can win/lose this meet.

Hugo makes the A final in the 400 and Lasco doesn’t have that out of nowhere bad lead off on the medley relay and Cal wins the meet last year.

One thing to keep in mind is I believe NCstate got DQed at ACCs in the 200 medley, so if they can do a clean race with safe exchanges, they will def get more than 6 points. Their seed is from mid season invite.

Or else they would have the top seed over Louisville. Which gives them an automatic score bump of 34 points. Closing to gap to 2 pts with Florida in 3rd.

Then you also need to take into account that Bobby Finke is not seeded to score in the 500 Free and 400IM – he didn’t get to swim at SECs where he usually puts up his NCAA seed times. H was 6th in the 500 last year and won the 400IM so chances are he’ll score a few more points than what the psych sheet has for him.

That’s true too. I’ll be honest that skipped my mind when writing the post above. That said in my pick em i sure put that into my picks and made sure to scroll down for finke’s name.

I also put faith in NCstate/Dino and Florida’s distance groups. They might be the best two groups in the country. Exciting to see who shows up. They could score major points for either team

That is so cool! Did you provide one of these for the women? I don’t recall seeing it.

fun and informative. I would make suggestions (lead the lines with the best swimmer/team’s transposed swimming video in his best stroke) but it’s great as it is!

This is a really interesting visualization. Part of me has to wonder if the ASU/Florida men take being in first for at least an event or two as momentum, which improves how they do on Day 3