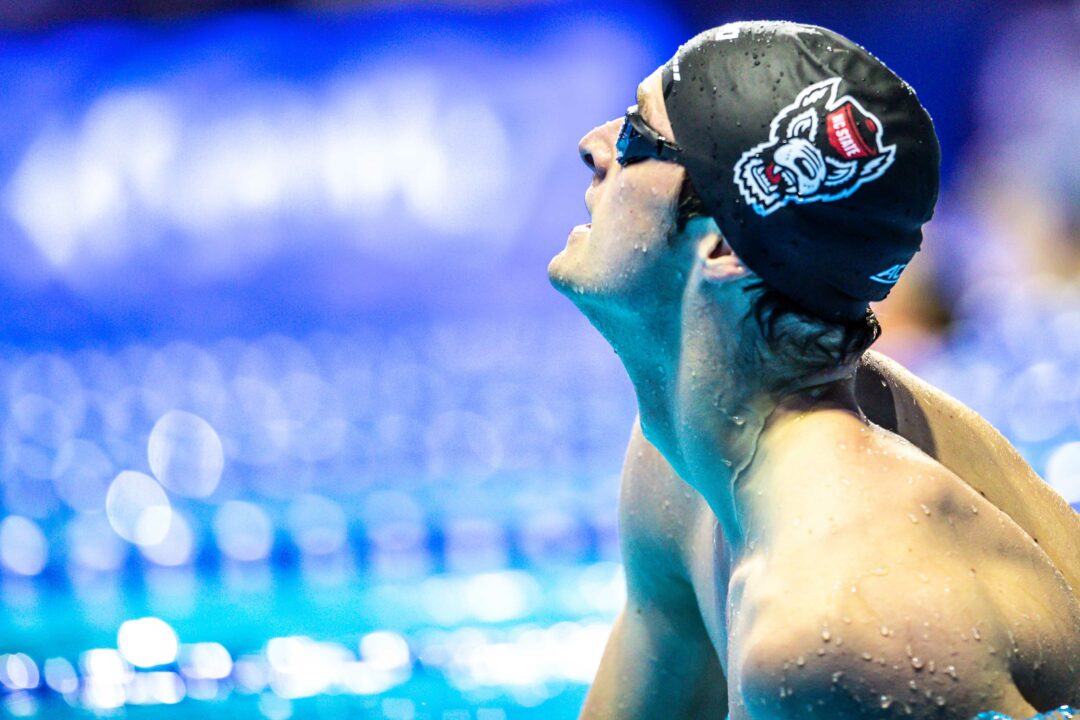 Though not a personal best, Stewart's performance last night marks the 5th-fastest time in history in the men's SCY 100 back.  Stock photo via Jack Spitser/Spitser Photography

TAC 17-year-old Claire Curzan broke the 17-18 girls NAG in the 200 fly on Saturday night in Cary. To read more about that swim, click here.

As has been the case all weekend, there was plenty of fast swimming outside of Curzan’s record-breaking swims.

Wolfpack Elite pro Coleman Stewart nearly swam a personal best en route to winning the men’s 100 back last night. Stewart swam a 43.70, touching just 0.08 seconds off his personal best of 43.62, which he swam at the 2020 UNC “Janis Hape Dowd” Invite in December of 2020. His personal best makes him the #2 performer all-time in the event, behind only American Record-holder Ryan Murphy‘s 43.49. Though not a personal best, Stewart’s performance last night marks the 5th-fastest time in history in the men’s SCY 100 back.

Here is the current list of all-time top 10 performances in the men’s SCY 100 back:

34-year-old Madison Kennedy is still going strong. In a race between herself and fellow pro swimmer Aly Tetzloff, Kennedy won the women’s 50 free in 22.38. The swim is off Kennedy’s personal best of 21.68 from 2015, but did mark her fastest time of this year by half a second. Tetzloff came in 2nd with a 22.62. Also notable, Hillsborough Aquatic Club 16-year-old Katherine Sikes took 3rd in 22.95, breaking 23 seconds for the first time in her career.

If there’s a person I’m pulling for in 2024, it’s Madison Kennedy. She’s paid her dues and come close sooooo many times.

Don’t forget that Stewart and Berkoff train together!

Guess he was raised different

Get that man a washing machine for those undies