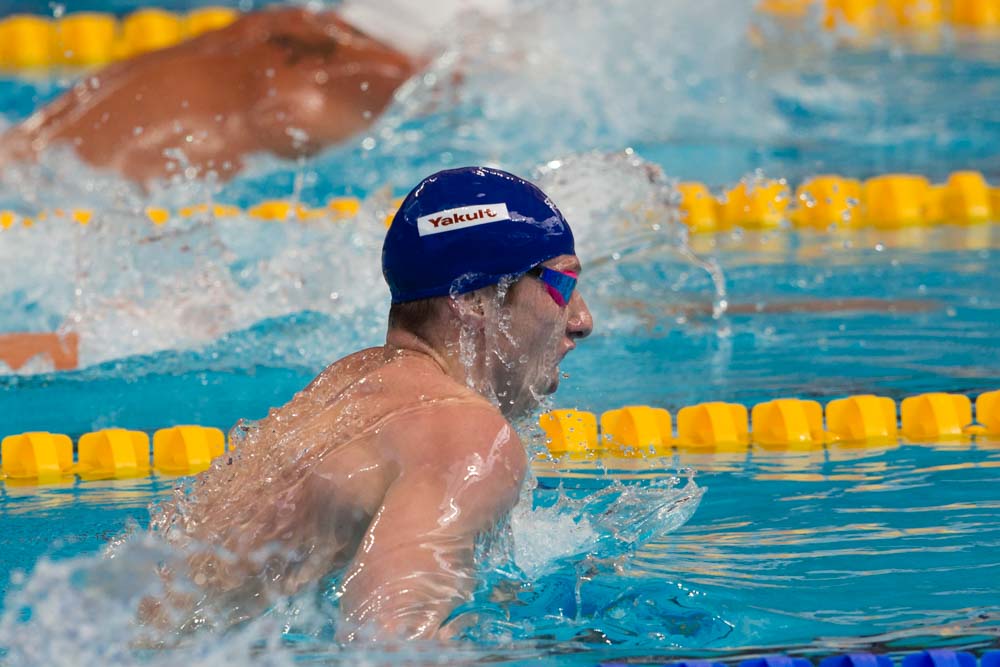 After the first day of the 2015 Duel in the Pool taking place in Indianapolis, Indiana, the United States leads the Euro All Stars by a score of 74 to 48.  Day 1 was a firestorm of records within the U.S. and beyond, as 6 American Records, 1 World Record and numerous U.S. Open Records were shattered with still another day left in the heated battle.

On a country-level, Scottish utility swimmer Dan Wallace put on a show in the men’s 400m IM, the very first event of the night. Representing the Euro All Stars, Wallace raced his way to 2nd place behind home crowd favorite, American Ryan Lochte, with Wallace touching in a final time of 4:04.10.

With his runner-up performance, Wallace, a former University of Florida Gator who won the long course version of this event at the 2014 Commonwealth Games, claimed a new Scottish National Record.  His time of 4:04.10 comfortably sneaked under countryman Lewis Smith’s long-standing record of 4:04.89 set back in 2009 (i.e., supersuit era).

Wallace finished a little over a second behind Lochte (4:02.78) in the race, but swam each leg with enough power to hold off a charging David Verraszto from Hungary who finished in 4:04.63.  In this meet’s format, however, Wallace and Verraszto are teammates on Euro All Stars, so the actual placement between just the two men for 2nd and 3rd wasn’t of too much consequence.

Wallace now owns the Scottish Short Course National Records in both the 200 IM and 400 IM events. As part of the Euro All Star squad, he’ll be competing in the shorter IM distance today in Indy, where he’ll meet Americans Conor Dwyer, Lochte once again and Josh Prenot. David Verraszto will be joining Wallace on the visitor’s side.