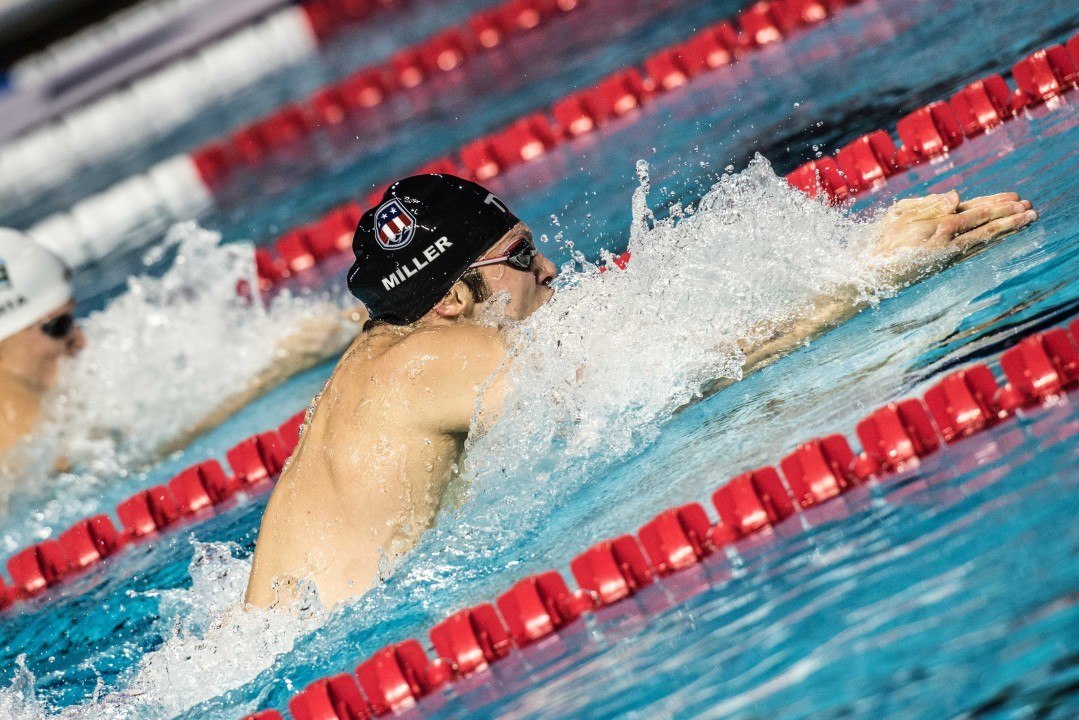 And why the Americans will be the best in Rio too. Current photo via Mike Lewis/Ola Vista Photography

With this past weekend’s throttling of the European All-Stars, Team USA moves to 7-0 all time in the international dual meet extravaganza. The first three victories came against Australia, who briefly challenged the US around the Sydney Olympics for world dominance.

The next four victories have come against a team from Europe, and given the bounty of talent in European swimming at the moment, it’s somewhat unbelievable that they haven’t won a single time. To be fair, they brought the meet down to the wire in 2013, where a 200 medley relay tie-breaker was used to decide the final outcome.

In 2015, it was back to business as usual, with team USA bruising Europe once again to the tune of 155-107 score. While there were highlights for Europe here and there, I can’t help but be struck by the amount of races Europe should have won but didn’t.

The key to understanding this, especially for American audiences, is to realize that America is the country in the world where swimming is least individual. Nearly every swimmer on the American squad has a lot of experience swimming dual meets, stepping up and competing as a team.

In fact, the exceptional performers on the European squad in this meet can be traced back to some good old American team swimming. It’s easy to forget as she’s criss-crossing the globe and hoovering up prize money, but Katinka Hosszu swam at USC and continues to be trained by an American coach.

Let’s look at a few examples from the first day of the competition:

Folks, that’s four great examples in just the first handful of events. Look at this meet’s results and you’ll find plenty more. It should hearten fans of American swimming to see this as we approach Rio.

It can be easy at this point in the Olympic cycle to get nervous about Team USA. After a lackluster performance in Kazan, with the Chinese surging, Australia seems to be gaining momentum at the same time.

I’ve given in to this panic before, but this time I’m staying faithful in the Stars and Stripes. The team we will send to Rio will have a huge advantage over every other country, the same advantage they’ve had for years. They will be a TEAM.

I think the meet should still be Australia vs USA. The two swimming powerhouses of the world going head to head would bring out the team aspect even more.

And all of the arguments about what the outcome could have been are largely irrelevant. The fact that this 50 countries vs 1 country (only 2 or 3:1 population wise) “dual meet” is even close speaks volumes to how much more depth USA swimming has than every country in Europe (combined in this case). It’s really not even close.

Australia vs. USA would be too lopsided.

I propose Australia+Japan (west pacific team) vs. USA (east pacific). This would be more balanced and more exciting.

Japanese swimmers race in Australia every year and they send their youth on extended training+racing in Australia a lot so they should have no problem bonding as a team.

Hhhmm, maybe not quite as lopsided as this last duel but I would have to agree. Whilst the AUS women probably have more of an edge over their US counterparts than this EURO team, the AUS men’s side remains very weak despite the advance of Larkin & McEvoy.

Re a AUS/JAP joint venture; there still could be language issues. Whilst this mutual co-operation seems to be a positive, its still early days. A joint venture COULD potentially work but this would be some way down the track.

This meet is a blowout if the best US women are there, between those swimming college special and probably the most dominant swimmer on the planet dropping an 8:59 1000 at NCAP.

The college dual meet atmosphere favors the US team because in season dual meets are all about racing. Simply more experience at it.

Sarah Sjostrom would have more than offset Ledecky’s presence. Remember that USA women won all the relays and relay points is all or nothing. With Sjostrom there, Europe would have swept all the women relays and the women result would have even decidedly put European women further ahead and reduced the total gap, even if Ledecky were there (who would have only contributed minimal extra points from in her individual swims)

Europe, actually, won the women’s 400 free relay at the most recent Duel.

It would be a problem if Europe (which is comprised of dozens of countries) had more team spirit/chemistry than USA.

Were the Europeans paid? If not why wld you ?

There was $120,000 in money available, making it not as lucrative as the average world cup meet but more so than a Grand Prix. I think event winners get around $1,000 per event, and being on the winning team gives you about the same amount. Matt Grevers also probably took home another $15,000 for his world record.

Not to be another Debbie Downer, but it seems to be continually swept under the carpet that the US women actually lost the women’s meet to Europe 67-62, after getting destroyed on the 4×100 free relay. That said, while the European teams struggled a bit as expected with jet lag and post-Europeans lag, both the USA men’s and women’s team did overall a bit better than expected; not all the ARs set were soft ones. Also, there seems to be great team spirit– that can’t be underestimated, and hopefully that will continue to build, as the closeness of the team in 2012 was a likely factor in their success in London.

This isn’t one meet, and it’s not just because any one swimmer decided to compete or not (though Ledecky would have been enough to turn the tide this time, the way Katinka won if for the Euro women). It would seem the women’s team is distinctly less deep than the men’s team, even after doing very well from 2010-2013.

You keep mentioning Ledecky not in the meet. Well, Europe also didn’t bring in Sarah Sjostrom, who is more valuable than Ledecky in this team format as Sjostrom would have swept the free and fly sprints and reverse the relays results to Europe’s favor.

Lochte’s 400IM is super impressive. It is the most grueling event in the pool. More grueling than any distance freestyle event even. He was awesome.

dont know if you watched the whole race but after 250m he was so far ahead, he just cruised the rest of it. that shows very clearly in his splits. it was still a solid swim and perfect for this competition since its only about wins and not the times.
but after all not impressive at all considering what he still COULD do in that event, he just did the minimum.

Manuel lost to Neal in 50 free. In SCY and LCM she usually beat her by 0.5s.
Missy struggles now at everywhere. This stupid high yardage kills her.