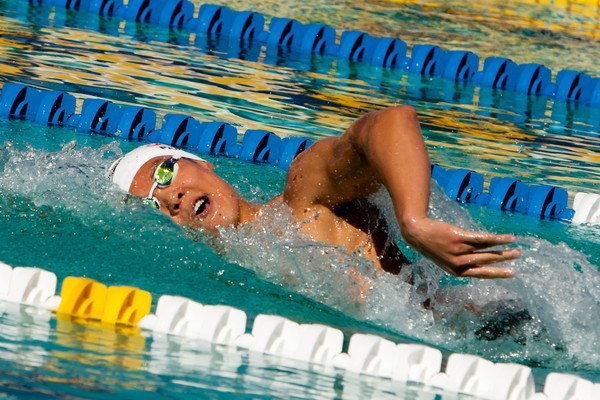 2008 Olympic gold medalist and two-time silver medalist at the 2012 Olympic Games, Park Tae-Hwan, is set to return home to Korea, still under suspension for having tested positively for a banned substance last year. Archive photo via COURTESY: Melissa Lundie/melissalundie.com

We reported in September that Park had relocated to Tokyo, Japan, with his manager and physical trainer in tow. The plan was for Park to train at Hosei University through December. As a grad student of Hosei’s sister school Dankook University, Park was to be entered into an exchange program and live off campus. However, Yonhap News is reporting that Park actually ended up in Osaka instead.

According to Korean press, Park is scheduled to return home to Korea today with his eye still on the 2016 Rio Olympic Games. He is continuing to train with coach Roh Min-sang, yet his Olympic berth is very much still up in the air.

Park still has to contend with the Korean Olympic Committee rule that states any athlete who has served a drug suspension are deemed ineligible for national teams in any sport for three years, with that time span beginning on the day on which the suspension ends.  However, some people in the legal community are pressuring the KOC to change the rule, claiming it unfairly punishes athletes twice.

For the doctor involved in administering the injection, which ultimately was deemed to have included the banned substance, prosecutors have recommended a 10-month jail sentence with a fine of approximately $850 (1 million won). Sentencing is scheduled for next week.

Korean Olympic trials are slated for both February and April, with swimmers participating in either one or both of the meets to attempt to qualify for the team.