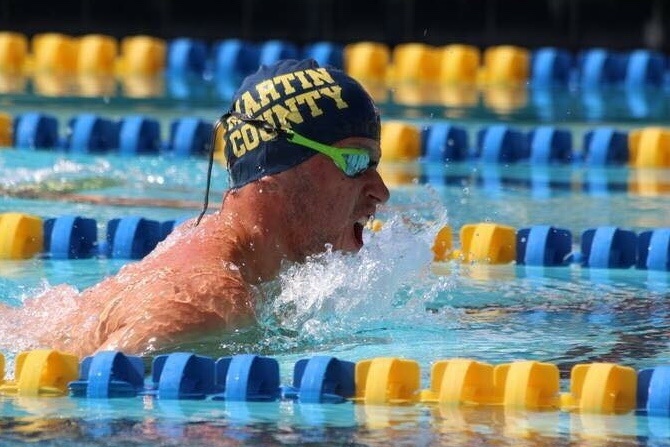 While COVID-19 may have brought the world of swimming to a stall, I am confident that we will make it through this and soon return to our happy place. Archive photo via Kathy Weeter

On a personal scale, I was just weeks away from racing at the Indianapolis World Para-Swimming World Series, and was feeling better, faster, stronger than I had ever felt before. The event wound up being postponed due to the pandemic.

But having to sit out of the water is nothing new to me — in fact, I could even say it has settled as second nature.

Born with a medical condition called “hydrocephalus,” which essentially translates to ‘water on the brain,’ I have gotten quite used to sitting in and out of practice more often than not — as it relates to swimming, you could say it has been fitting or fate.

If it wasn’t due to a brain surgery, I simply had to go see the neurosurgeon just to follow-up and ensure that everything is working as it should.

Although, I did have a rough time accepting the challenges that arose as a result of my last brain surgery back in 2013 — when I was able to get back in the pool one month after the procedure was done, it was like starting from scratch, literally.

Although it took a lot of hard work to get back on track, it was worth the effort. And did it pay off.

This was just the beginning for me in terms of wanting to not only share my story, but also to bring to light those who are on the same boat as I have been. I figured that everyone has a story to tell.

A few years later — flash forward to May of last year— , I took my first footsteps in sports journalism when I joined SwimSwam. And the thrill hasn’t stopped since.

It almost seemed to me as if I was back at square one this past March. Me along with many others, I should say.

These times have not been easy, at all. But, in a sense, being able to cover this pandemic and seeking the truth has never been more intriguing.

In fact, this has brought me closer to my Spanish roots, as I have been able to cover the impact that the epidemic has had in my country of birth.

When not covering for SwimSwam, I tried to mix up my training routines in any way possible, and even picking up on new hobbies or circling back to what once were pastimes. In all, these have been times of reinventing.

But again, that’s not bad. One of my coaches once said, “you have to be willing to get uncomfortable in order to improve” — in the end, he wasn’t wrong at all.

It’s certainly been a bumpy ride, but when the time comes, we will become stronger.

There’s a quote I often turn to, and which quite ensembles these trying times we currently find ourselves in — “where there’s a will, there’s a way.”

We’ve all been focused on coping with the quarantine. Now it’s time to begin coping with our return to the pool, and what that looks like.