Shout from the Stands: Pursuit of a Paralympic Dream 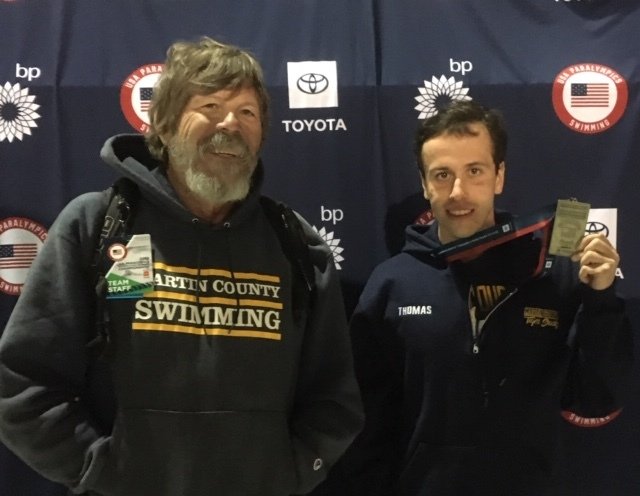 I don’t let Hydrocephalus or anything get in my way in or out of the water. I believe that the only limits in life are those that we impose on ourselves. Current photo via Rosanne Beltran

This “Shouts from the Stands” submission comes from Tomas Rodriguez, a swimmer at Oswego State.

I was born on May 10, 1998, in Madrid, Spain, even though I have dual U.S. and Spanish citizenship. I was diagnosed with a brain hemorrhage at 3 days old, hydrocephalus a few days later.  I had my first shunt placed on the right side of the brain at the age of four months. Due to my body rejecting the shunt, at eight months a new shunt was inserted on the left side of the brain.

At the age of three, the peritoneal catheter got obstructed and I was taken immediately to the emergency room. When I woke up from surgery my mom realized I was blind because I was not naming my toys right (each figure had a name).  The surgeon confirmed to my mother that there were clear indications that the optical nerve was damaged from the severe pressure for the 10 days between having had an MRI and the emergency surgery.  It took me almost one year to be able to see the speck of an airplane in the sky.

My neurologist told my parents to sign me up for swimming lessons. At the age of 10 I decided I wanted to take a step forward in the sport, so I started to swim competitively. When I was 12 years old, I started to feel the catheter pulling, and it was starting to happen more frequently.  The pulling was making me sort of hold myself differently, as if it was pulling on my neck.  It took almost three years until I finally had my next surgery. Scar tissue had formed all along the catheters which meant they had to replace the catheter from the valve to the peritoneum. They replaced the valve, but the catheter in my brain can’t be removed as it has scar tissue attached and removing it at this point, I’m told, is dangerous.

Throughout the years I’ve continued to swim with my team, training six days a week, at the same level of training as the rest of my teammates, none of which have a disability.  I challenge myself every day I dive into a pool to improve no matter how much my physical challenges may seem like barriers to some. To me, they are just obstacles to navigate around so that I can continue working towards my goals.

In the last two years I’ve had successes in the Madrid Intellectual Disability Federation as well as in the Spanish National Intellectual Disability Federation.  I currently hold 19 national champion titles and 15 Madrid records (eight in short course and seven in long course) and one National record. I have also been a national bronze medalist in the second Spanish Open Water Cup for able-bodied swimmers.

Every athlete has good and bad time periods; last year was one of my more difficult years as a swimmer.  It appears my shunt may be partially blocked again, but for now there are no surgeries according to my doctors.  I’ve had to exert more energy and concentration on overcoming the challenges of hydrocephalus, both in and out of the water.  This past summer I even challenged myself to participate in four Open Water events around Spain. What an incredible experience, and several organization even offered specialized support during the swims.

Almost two months after surgery I started to have more balance issues than I used to, and I began having problems with controlling my right leg. Almost two years after, I was finally diagnosed by my neurologist with hemiparesis on the right side of my body as a result of the brain injuries.

I am currently a member of the Oswego State Swimming team in Upstate New York, even though at the Paralympic meets I swim for the Martin County swim team located in Stuart, Florida. I am in pursuit of the Paralympic dream, and now trying to transition from Spain to the United States also in my sport. On December 14, 2018, I reached a major milestone as I achieved my first Can-Am (Canada and the United States) champion title in the 100-meter butterfly in the S9 class. This upcoming April I will swim at the World Para Swimming World Series event set to take place in Indianapolis (April 4-6). My dream is to be a Paralympic champion as I strive to represent the stars and stripes at the international level.

Outside of the pool I’m a broadcasting major at SUNY Oswego with a minor in Spanish. My dream job is to travel the world as I tell other people’s stories. I don’t let Hydrocephalus or anything get in my way in or out of the water. We are all born different, but we should not put a limit on ourselves for that reason. I believe that the only limits in life are those that we impose on ourselves.

Pulling for you man! I too have Hydrocephalus and I achieved my dreams. You can too! Here’s a link to my story: https://swimswam.com/matt-odonnell-two-brain-surgeries-one-olympic-trials-cut-later/