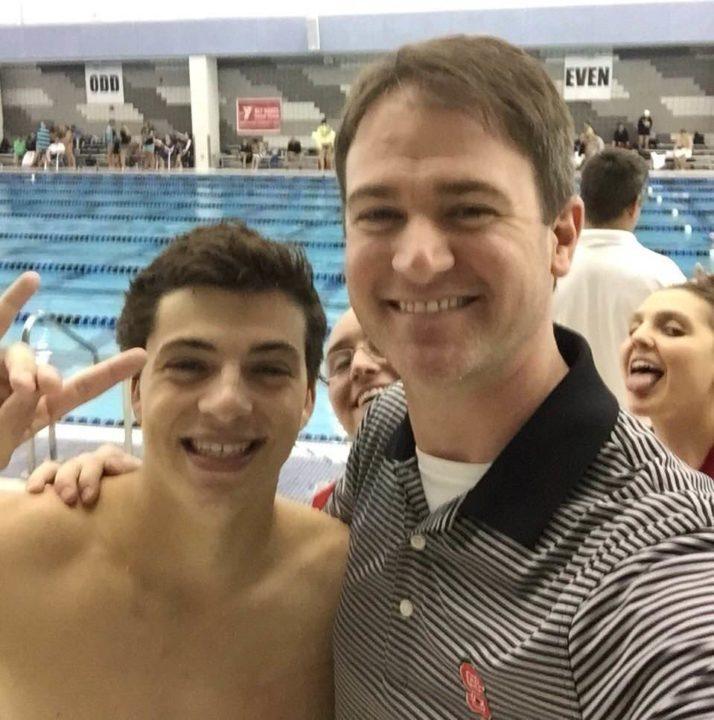 With the 2016 U.S. Olympic Swimming Trials now less than 7 days away, over the last few weeks, swimmers around the nation took advantage of final racing opportunities to nab the necessary qualification times prior to Monday’s entry deadline.

One swimmer able to attain a qualifying time just under the wire is NC State junior, Matt O’Donnell, a backstroke and IM specialist originally hailing from the Sarasota YMCA Sharks. What makes O’Donnell’s journey to this joyful point unique, however, is the fact that he accomplished his qualifying feat after not one, but two brain surgeries.

Having been diagnosed with hydrocephalus, a condition which causes excessive accumulation of fluid in the brain, O’Donnell was outfitted with a shunt, or valve system when he was just 6 months old. From that point on, he was able to do all the things ‘normal’ kids do, including selecting swimming as his athletics avenue.

All was well with O’Donnell physically until May of 2015 when the Wolfpack member felt a ‘pop’ in his neck during a routine weights session. He continued to attempt to train with the injury, which at first started out as a nuisance, but grew into a pain O’Donnell describes as ‘shards of glass digging’ into him.

After consulting with NC State athletic training staff, O’Donnell visited the Duke Neurology Center, where they confirmed the original shunt had broken, but could be relatively easily removed in a routine surgery. Such surgery took place in September and O’Donnell was on his way back to the pool, hoping to pick up right where he left off.

His body had different plans however, as O’Donnell said he suffered ‘the most terrible headache I’ve ever felt in my life’ in October 2015 right before a check-up with Duke. His pain was so terrible he said, the NC State staff brought him to the emergency room. Apparently the ventricle in the swimmer’s brain, once thought to have taken care of itself, decided to ‘slowly leak like a balloon’, a situation which warranted a new shunt being placed in his brain.

The unexpected second surgery took place in the beginning of October, but side-tracked the ACC swimmer with no intense activity for 6 months. That was a hard pill for O’Donnell to swallow, knowing that the lead-up to Omaha grew shorter with every passing day.

“There was a point in the hospital after the second surgery where I didn’t know if I could or even wanted to swim again. My condition is a lot to deal with both for me, my family and my team.”

But, with the support of his family, coaching staff and teammates, O’Donnell started the climb back to fitness. Under the tutelage of Associate Head Coach Gary Taylor, O’Donnell was able to battle back to where he was before his shunt surgery and in good enough shape for one final push for Trials qualifying times last weekend at the GCY Sprint & Distance Classic in Greensboro.

O’Donnell kicked off the meet with the 400 IM, quite the test to determine if the 20-year-old’s shape was where it needed to be to make a successful run. Although O’Donnell missed the cut for Omaha in the event, he scored a personal best time of 4:28.47, which he says ‘gave me a huge confidence boost’ headed into his second event.

All the pain, uncertainty and perseverance were channeled into his final swim, as O’Donnell clinched an Olympic Trials berth in the men’s 200m backstroke, notching a career-best time of 2:03.59. That mark slid under the Olympic Trials qualifying time by just two tenths, but was enough to give O’Donnell a personal victory over the challenging ordeal he endured since last summer.

“When I got the cut I was over the moon. I can’t thank my teammates, coaches, sports medicine staff enough for believing in me,” O’Donnell says thankfully.

Wonderful, thrilling –Also —-everyone shoud read the book “My Stroke of Insight” by Jill Boulte Taylor, this is a story of a Harvard Brain Scientist who had a stoke and LOST the LEFT side of her brain . It is a remarkable journey to complete recovery and the power of the human spirit, which cannot be matched, support and dedication of Medical staff and family. Thank God for Research and the devoted people who try every single day to find cures.

Powerful! Your fighting spirit, passionate attitude, and enthusiastic gratitude makes us all want to embrace life that much more! So darn proud of you, Matt!!!!
XO, Auntie Lis

Good luck Matt! So happy to hear things are going in the right direction. Your story reminds me of Issac Grombacher at the 2000 Olympic Trials. I don’t know if Issac will be on deck in Omaha but if so, I would love to introduce you to him. He is doing well and coaching in Austin. Here is a link to his story from 2000.

I’ll be in Omaha and am looking forward to seeing Matt swim. Hopefully, we’ll have a chance to meet and talk about our experiences.

Wow. Really puts life into perspective. He is someone I can look up to without hesitation.

Wow…..just….WOW!!! What a terrific story for a dedicated young man.

Matt, you are beautiful and so is your life. Go Matt!!! Omaha, here Matt comes.

This is a great. Thanks for sharing. Congratulations.