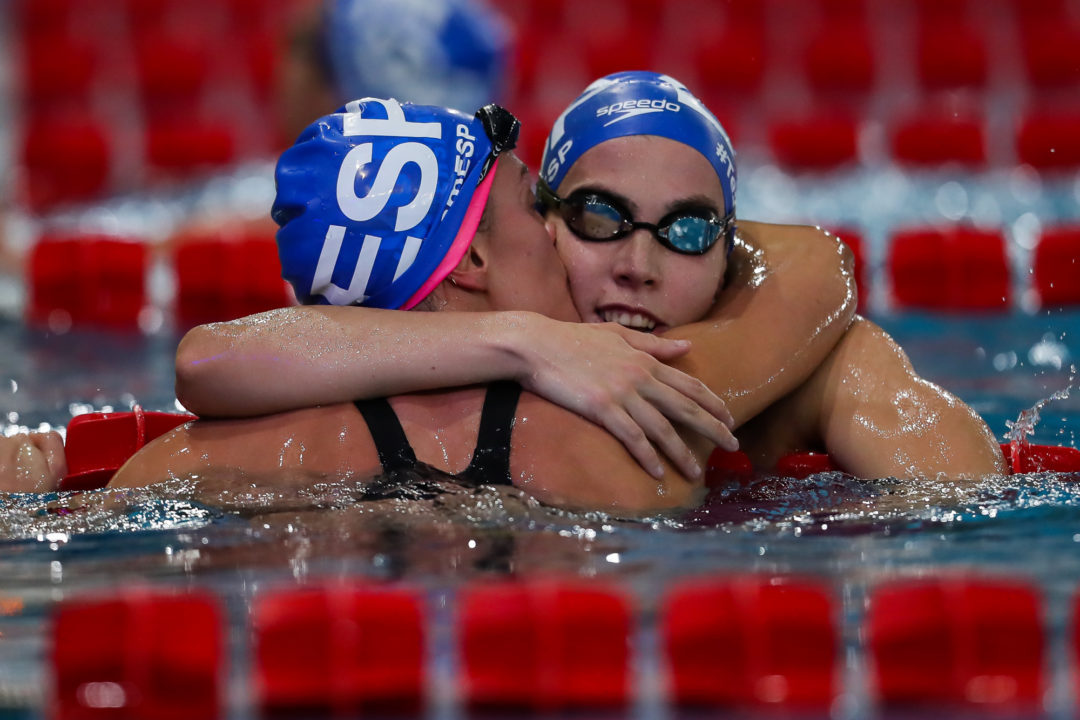 A total of two national records and an age group record fell at this year's edition of Spain's long-distance national championships. Archive photo via Iván Terrón for RFEN

A total of two national records and an additional age group record fell at this year’s edition of Spain’s long-distance national championships. The meet features the 3,000-meter freestyle for swimmers aged 14 and 15, and the 5,000-meter freestyle for swimmers over the age of 15, split into three different age groups – Junior 1, Junior 2 and Senior.

In the absence of reigning Olympic 200-meter butterfly champion Mireia Belmonte, it was Jimena Perez claiming the top prize in the women’s event, slicing the national record Belmonte had owned in the event since 2017.

As per Perez’s swim in contrast with that of Belmonte’s, the main differences in the splits took place in the inaugural 100-meter mark where Perez was out faster than Belmonte by over a second. Further, in the closing 100-meter split, Perez came back home faster than Belmonte did by more than two seconds in 1:04.37 compared to Belmonte’s closing split of 1:06.49.

In the men’s event, age-group swimmer Alejandro Puebla, 19, got the job done in a new record time fashion for both his specific age group (Junior 2) and the senior group. Puebla topped the men’s event in a time of 52:46.52, which supersedes Albert Escrits‘s 52:48.14, a record time Escrits established Feb. 23, 2019.

Putting both Puebla’s and Escrits’s swims into perspective, Puebla was nearly one second faster than Escrits in the inaugural 100-meter mark enlarging that difference with a final split just about a second and a half faster than what Escrits produced in 2019.

As for Belmonte, the 30-year-old swimmer was slated to represent Iron during the ISL’s second season, though she did not appear in the team throughout the season.

The veteran swimmer also missed a handful of international meets and training camps due to hernia surgery, however, she did race at the Open Castalia Olympic-qualifier where she was one of five swimmers to earn their spot on the Olympic roster for Tokyo last December.

Belmonte was not present at this year’s long-distance championships, albeit she won the 5,000-meter event during the 2014 and 2018 championship.

At the Castellón meet, Perez swam under the Olympic standard in the 1,500-meter freestyle alongside Belmonte, but because the championship did not identify as the nation’s Olympic trials, only Belmonte was able to qualify for Tokyo at the time.

Just go to a lake for Christ sakes!!! 5000, are serious??? Ain’t nobody trynna be a whole hour watching people lapping the pool smh…
Wake me up when the 50 strokes make it to the Olympics

Would be incredible to see Ledecky do this. If she’s on, she can probably hold 1:02 high-1:04 mid? 52:xx is definitely possible (though obviously unlikely we see Ledecky ever do this in a serious setting).

I would throw up