Belmonte Absent From Pura Loulé Due To Hernia Surgery 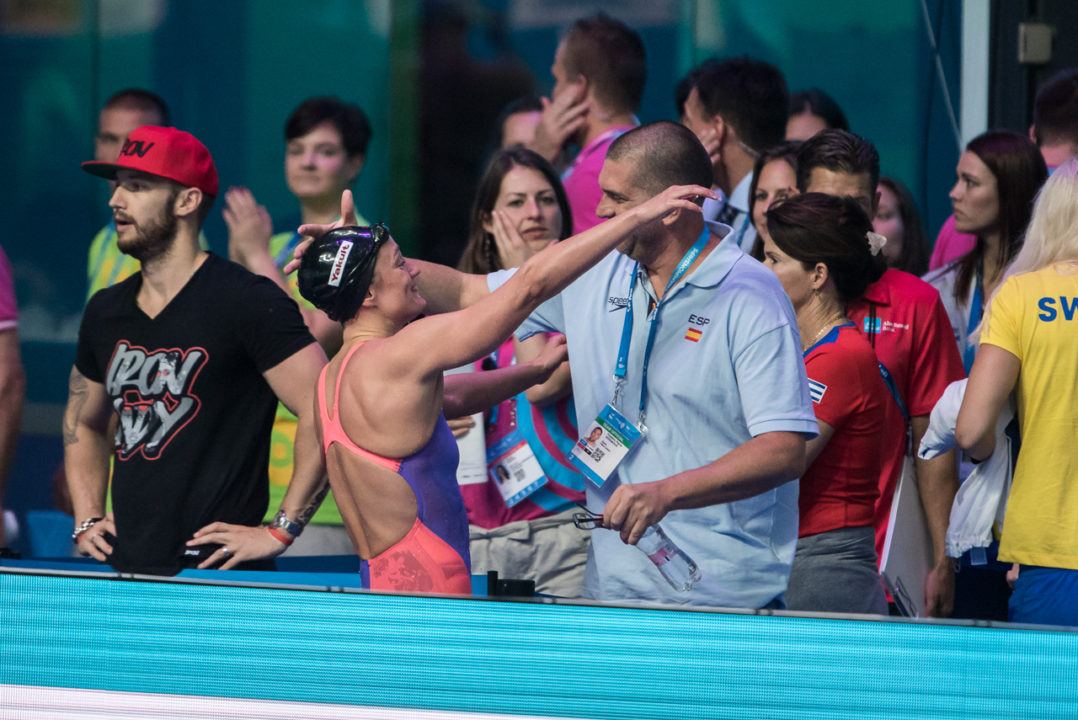 2016 Olympic gold medalist from Rio Mireia Belmonte was set to race in Portugal this weekend but bowed out due to hernia surgery. Archive photo via Peter Sukenik/www.petersukenik.com

The 2020 Pura Loulé meet wrapped up in Portugal tonight, but not before we learned the reason for Spanish Olympian Mireia Belmonte‘s absence.

The 200m fly Olympic champion was entered to race several events at this 3-day meet but was missing from the get-go, leaving SwimSwam to inquire with Spanish head coach Fred Vergnoux. Vergnoux confirmed that Belmonte is indeed injured, having undergone minor surgery earlier in the week for an abdominal hernia.

29-year-old Belmonte has experienced a string of injuries since topping the podium in Rio at the 2016 Summer Olympic Games. After taking 3 individual medals at the 2017 FINA World Aquatic Championships, including 200 fly gold, the national record holder had rather quiet 2018 in the pool. She wound up pulling out of that year’s Spanish Short Course Championships, European Championships, and Short Course World Championships.

She had suffered bouts of dizziness, an ankle injury and other health problems and chose to follow the recommendation of her doctor to use the year as a time to finally get her health back on track.

Last year Belmonte competed in Gwangju, making 2 individual finals and placing 8th in the 800m and 1500m freestyle events at the World Championships, although she opted out of November’s Spanish Short Course Championships.

She has competed once this year, pre-coronavirus pandemic in January at the Campionat Catalunya Open Absolut in Terrassa. There she collected multiple golds, including in the following races:

We will continue to monitor Belmonte’s return to the pool following this latest injury.

As for the swimmers who did get wet in Portgual on the final night, it was Spain’s Albert Escrits Manosa who got his hand on the wall first in the men’s 800m free, touching in 7:56.54. That added to the 1500m free he won on the first night of competition.

Brazilian Felipe Franca Da Silva scored gold in the men’s 50m breast in 28.38, while Spaniard Jessica Vall wrapped up her sweep of the women’s breaststroke events with a time of 31.63 for gold in the 50m.

The men’s 100m free was won by Brazil’s Pedro Spajari, the man who also won the 50m free last night. He was the only man of tonight’s final to get under 50 seconds with a time of 49.44.

A Portuguese Age Record bit the dust this evening, courtesy of Francisca Soares Martins En route to finishing runner-up in the women’s 200m free, Martins hit a lifetime best of 2:03.11 to establish a new national mark for 17-year-olds.

Hernias need to get taken care of. Glad she is doing this. Best to Mireia & hoping for a full recovery for her.