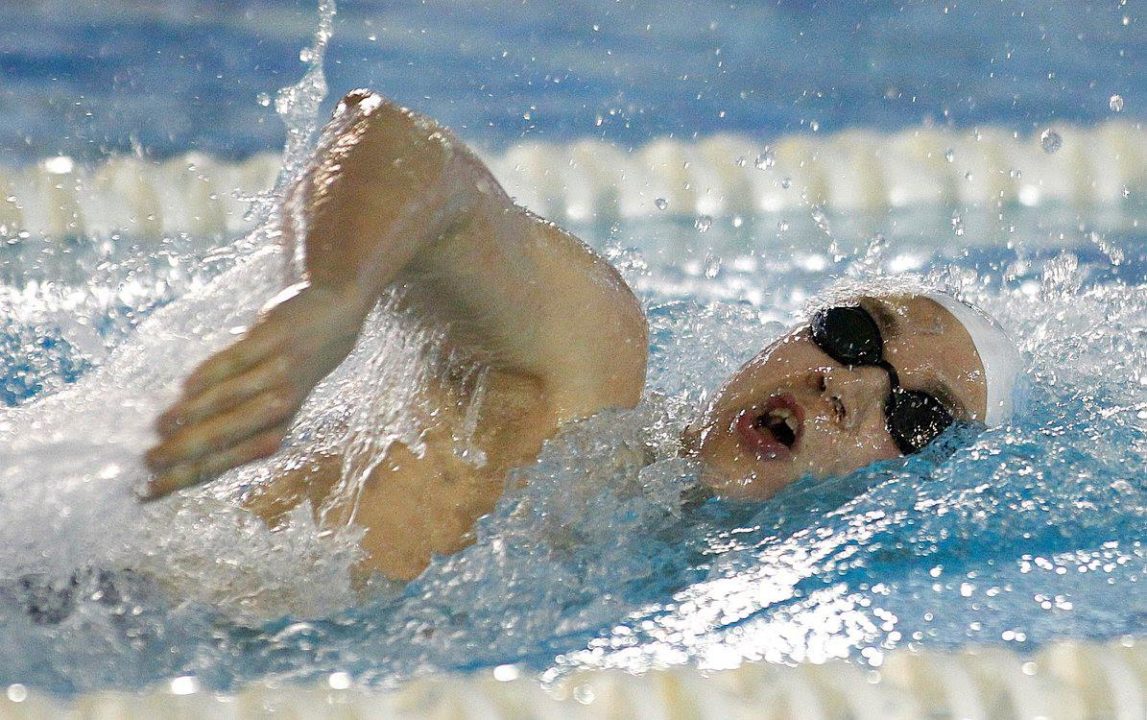 Catch up on action from day 1 in Portugal, including a 3-way battle in the men's 1500 free that resulted in the top 3 finishers touching within a fingernail. Archive photo via Federació Catalana de Natació

A tri-battle of sorts got underway tonight in Pura Loulé, as the host nation of Portugal is taking on visiting elite squads from Spain and Brazil. The competition marks the first for many athletes who have been in a racing drought due to the coronavirus pandemic.

The 3-day meet is being held without spectators, while the participating athlete count is limited to 80. Those spots filled up quickly, as Portgual is set to have 24 swimmers representing the nation, while Spain sent 33 competitors and Brazil comprises most of the remaining entries.

Right off the bat, there was a thriller of a race in the men’s 1500m freestyle, as the top 3 finishers all touched the wall less than half a second apart.

Spain’s Albert Escrits Manosa wound up at the touchpad first, clocking a time of 15:19.65. That edged out a charging Portuguese swimmer in Jose Paulo Lopes, who settled for silver in 15:19.76 while Manosa’s teammate Raul Santiago rounded out the top 3 in 15:19.97.

Manosa owns a lifetime best of 15:10.78 in this grueling event, a mark he logged en route to a 4th place finish at last year’s World University Games (Summer Universiade).

For runner-up Lopes, he had never before been under 15:20, as his PB rested at the 15:24.52 he notched just in February of this year at a domestic meet in Lisbon. Finally for Santiago, his bronze medal-worthy result tonight checks-in as the 3rd fastest time of his career.

The women’s 200m fly was devoid of Olympic champion Mireia Belmonte of Spain, although the 29-year-old is expected to race here.

In her absence, it was home country swimmer Ana Monteiro who got it done for gold, touching in a time of 2:10.85. Monteiro is Portugal’s national record holder having produced a PB of 2:08.03 at the 2018 European Championships to render her in 5th place that year.

For perspective, Scheffer owns the Brazilian national record with his super speedy 1:45.51 registered in 2018. Last year at the FINA World Aquatic Championships, the then-21-year-old fell just short of making the final in this men’s 200m free, placing 9th with a time of 1:45.83.

In fact, Scheffer has produced 8 of the 10 fastest Brazilian men’s 200m freestyle performances of all-time.

Among the night’s additional winners included Juan Gutierrez of Spain taking the men’s 50m back in 25.42, while Lidon Munoz also of Spain won the women’s 100m free in 56.00. The women’s 200m breast saw Jessica Vall easily beat the field by over 3 seconds, with the Spanish national record holder stopping the clock in at time of 2:24.83.

1. This brings back the memory of the Men’s Division I NCAA 1650 in 2017. Sam Kendricks described it as “the greatest race he’s ever witnessed..” https://swimswam.com/clark-smith-smashes-american-record-win-ncaa-1650-free-1422-41/ & also watch iot here: https://swimswam.com/watch-clark-smith-3-others-break-ncaa-1650-record-thrilling-race/ Though not totally on par with that race, this one in Portugal must have been fun to watch nevertheless.

2. Please add further clarification to the line above “In fact, Scheffer has produced 8 of the 10 fastest men’s 200m freestyle performances of all-time.” Brazilian?