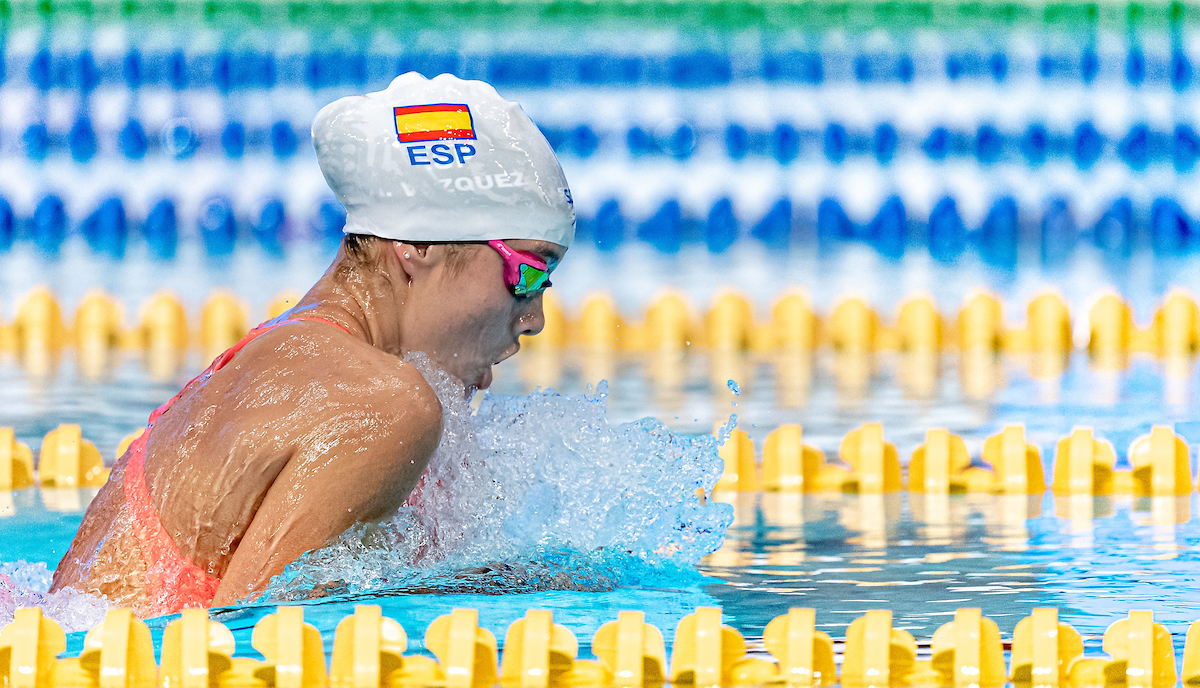 Day 2 of the 2020 Pura Loulé meet in Portugal was again without Olympic gold medalist Mireia Belmonte, despite the versatile 29-year-old having appeared on the start lists.

With the Spaniard star’s absence in the women’s 400m free event, it was countrymate Paula Juste Sanchez who got the job done for gold. Clocking a time of 4:13.46, the 17-year-old held on to beat Viviane Jungblut, who also got under 4:15 in a silver medal-worthy time of 4:14.98.

For Sanchez, her performance here is on par with her breakout swimming from last short course season. At the Spanish Short Course Championships in November, the then-16-year-old twice broke the National Age Record in the 200m IM (2:10.49) while also producing a new age mark in the 400m IM (4:36.38).

She competed in this 400m free event at the 2019 World Junior Championships where she placed 5th with a final time there in Budapest of 4:10.72, her lifetime best.

National record holder Jessica Vall, also of Spain, doubled up on her 200m breast victory from last night with a win this evening in the 100m sprint here in Portugal.

Lidon Munoz produced the only sub-26 second time in the women’s 50m freestyle, finishing in 25.70 for the gold. She owns Spain’s fastest time ever with the 24.82 she posted at last year’s Sette Colli Trophy in Rome, Italy.

The men’s 50m free was won by Brazil’s Pedro Spajari, with the 23-year-old hitting a time of 22.53. That came in .30 ahead of Portgual’s Miguel Duarte Nascimento, who snagged silver in 22.83. There was a 2-way tie for bronze between Brazil’s Marcelo Chierghini and Juan Segura Gutierrez of Spain, with both registering 23.04.

Spajari has been on several international medal-winning relay squads for Brazil, including the swimming 400 free relay at the 2018 Pan Pacific Championships, as well as the same event at the 2019 Pan American Games. He took the individual silver medal in this 50m free event at the 2019 World Military Games, posting a time of 22.53 in Wuhan, China.

Spain’s World Junior Record holder and reigning World Junior champion in the women’s 400m IM, Alba Vazquez Ruiz, collected gold her in specialty event. She stopped the clock in at time of 4:46.86 to top the podium, with her time her representing the 10th fastest time of her career.

Last year in Budapest, Ruiz made her statement with a winning time of 4:38.53 to take the world junior title and fire off a new WJR in the event.

Wait wasn’t Emma weyant faster than 438 as a junior?

I know that this will seem foreign to an American audience, but much (most?) of the world ages up based on year of birth. Not as pertinent in swimming, but in team sports, that keeps you from aging up in the middle of a season and having to switch teams.

Both are equally as arbitrary from a sporting sense, and both would advantage some swimmers and disadvantage others.

In Australia it also is on birth date. I swam and played team sports and had a late in the year birthday. I definitely found aging up on the day better. Because i atleast had a period of the year where is wasnt one of the less developed kid physically. My birthday was just before state LC in QLD, so I was always one if the youngest there. But SC season I was one of the oldest. It definitely helped keep me engaged in the sport as opposed to the team sport where I was also good enough at, but around 12/13 i got sick of getting beat up by kids near 12 months older and more developed, especially when… Read more »

It seems Belmonte “no shows” often?!?