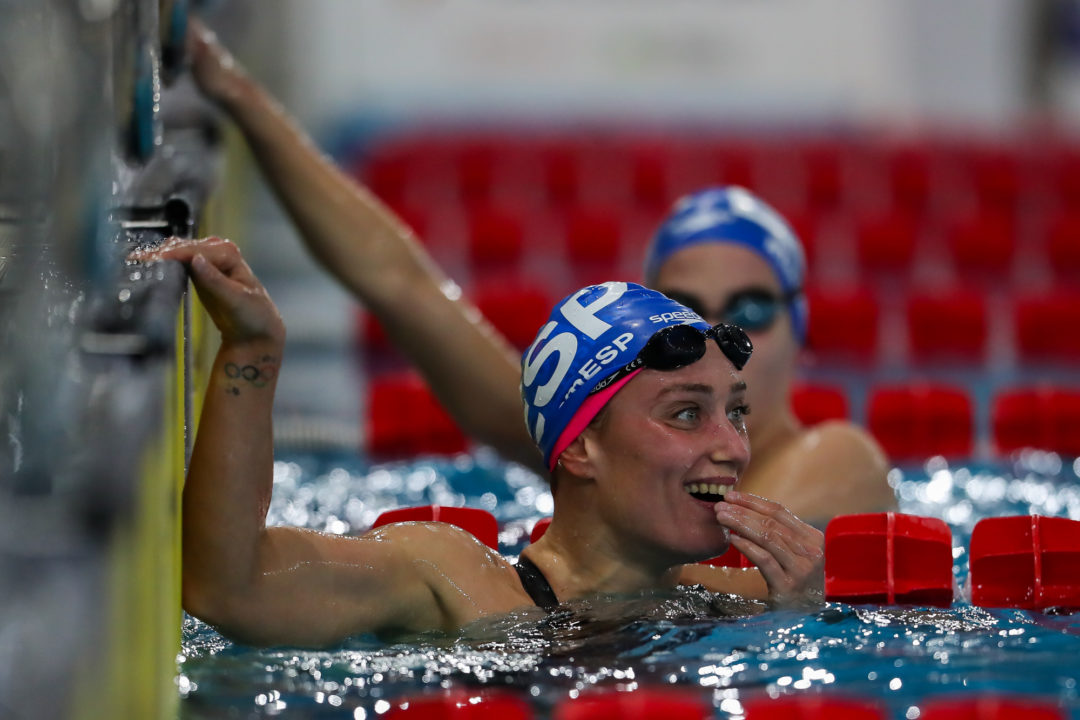 Spain's Mireia Belmonte qualified for her 4th Olympic Games, hitting qualification times in both the 800m and 1500m freestyle events over the weekend. Current photo via Iván Terrón for RFEN

The 2020 Open Castalia Castellón concluded today in Spain with additional Olympic qualification times being met by several swimmers. Two more qualifying opportunities are slated for 2021 including the Spanish Championships in March.

As a refresher, below are the qualifying times for Spanish swimmers.

Yesterday we saw Jessica Vall, Mireia Belmonte and Hugo Gonzalez bust out swims worthy of a spot on the Tokyo 2020 Olympic roster for Spain and two of the three added another event.

Belmonte qualified for her 4th Olympic Games via her 1500m freestyle performance yesterday and this evening she added the 800m free to her repertoire. Stopping the clock in a time of 8:32.61, 30-year-old Belmonte was well off her own lifetime best and Spanish national record of 8:18.55. However, she did what was needed to get under the 8:33.36 qualifying time for Tokyo.

Of note, Belmonte was the top-seeded 400m IM heats swimmer, posting a morning swim of 4:45.55. She wound up dropping the event for tonight’s finals, indicating she was solely focusing on her Olympic freestyle qualification. We reached out to coach Fred Vergnoux for further insight into Belmonte’s Olympic schedule goals.

As for Gonzalez, the Cal redshirt already qualified for Tokyo in the 100m back yesterday, albeit by .01. Today he made the cut in the men’s 200m IM with a little more breathing room, nearing his own national record in the process.

Gonzalez was the only sub-2:00 swimmer of the final and was rewarded by comfortably clearing the Olympic QT of 1:59.67.

Splitting 1:03.03/1:06.33, Zamorano’s time not only overtook her own meet record, but it also put the longstanding Spanish national record on notice. That standard rests at the 2:09.13 Duane Da Rocha produced back in 2014.

Finally, Nicolas Garcia Saiz made it happen in the men’s edition of the 200m back, logging a time of 1:57.16. That sneaked under the qualifying time of 1:57.50 and gave Spain a 5th swimmer on their roster through this December meet.

Spanish Qualifiers for the 2020 Olympic Games Through This Meet

Nicolás Sainz is 18 years old and went a 3 seconds pb on route to his Olympic standard. Funny enougth he didnt break the Age Group record that belongs to Hugo who swam 1.56.69 at world juniors

Do the swimmers who placed second but also swam under qualifying times not get considered? e.g. Women’s 1500 free, 200 breast

Second qualifiers need to swim again on that marks on April, at Spanish trials. They haven’t guaranteed a place for the games yet. Luckily Marina on 200 breast, Jimena on 800 free and Pons on 400 medley will low the marks on April, as always.