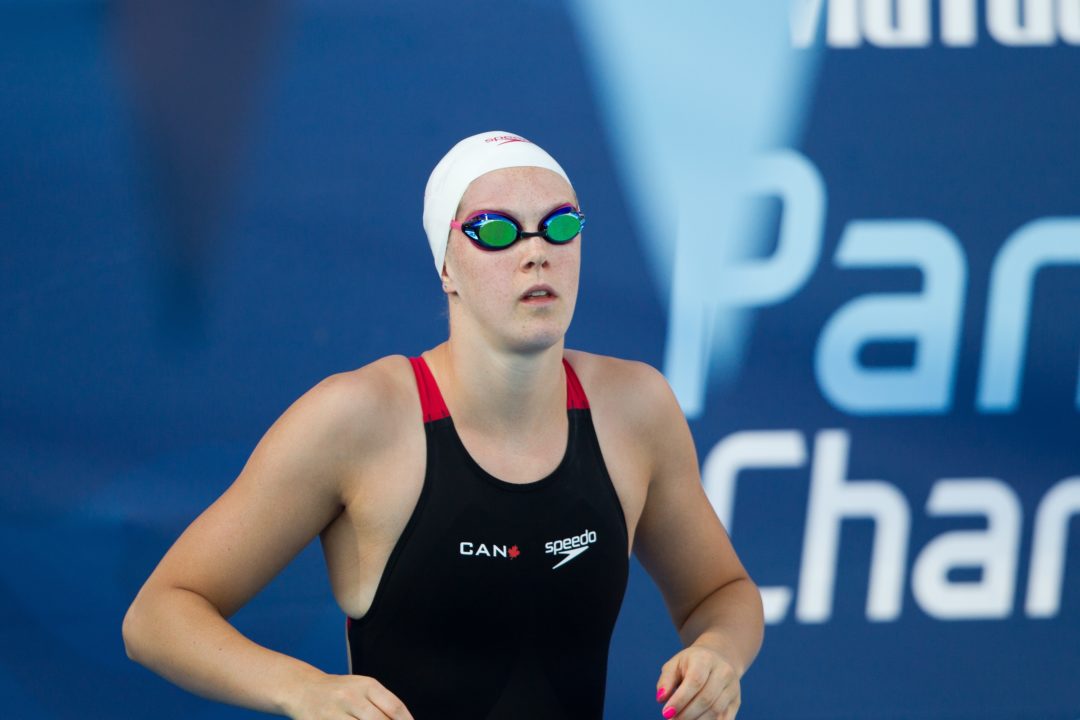 Calgary Dino Erica Morningstar stepped up from heat 1 of the women’s 50m freestyle to break the meet record, posting a 25.07.  Morningstar was entered with no time, but is no stranger to the sprint freestyles; she finished 5th in the 100m free at the 2007 FINA World Championships in Melbourne, Australia.  She bested teammate Amanda Reason‘s record of 25.12 set last year.  Reason finished third in the prelims with a 25.72, behind UQTR’s Carolin Lapierre-Lemire (25.26).

On the men’s side, top seed Luke Peddie (UBC) retained his top spot posting a 22.42.  Dominique Massie-Martel finished in second at 22.63 representing Laval.  And surprise entry George Soules (Toronto) will take lane 3 into the final, at 22.73, just besting UBC’s Kelly Aspinall at 22.77.

50 backstroke winner Gabrielle Soucisse (Carabins) posted the top time of the morning in the women’s 100 back with a 1:00.54 to grab lane 4 in the final.  Canadian Olympian Erica Morningstar (Calgary) followed Soucisse in 1:00.79 ahead of Genevieve Cantin (Laval) in 1:01.55.  Other 50 backstroke medalists Grainne Pierse (UBC) and Andrea Jurenovskis (Toronto) qualified in fourth and fifth.

On the men’s side, Calgary’s Gleb Suvorov led the way in 53.67.  Pascal C.Cantin (Laval) was through in second with a 54.01 followed by Calgary Dinos rookie Russell Wood (54.20).  Kelly Aspinall (UBC) who broke the record in the 50m backstroke twice yesterday qualified himself in fourth.  Watch for this to be a hotly contested race tonight with the potential to see another record breaking swim.  Olympian David Sharpe (Dalhousie) is also in the mix.

OUA Swimmer of the Year, Alisha Harricharan (Guelph), posted the top prelim time in the women’s 50m fly.  She touched the wall in 27.27 ahead of Kendra Chernoff (Alberta) in 27.36.  Watch for a very mixed field in this one: no single university is represented in the A final with more than one swimmer.

Long time 50 fly specialist Kelly Aspinall (UBC) elected to scratch the 50 fly to focus on the backstroke, leaving Thunderbird teammate Coleman Allen to do the heavy lifting.  Allen topped the field in the preliminary with a 24.04 ahead of CIS record holder Mike Smerek (Toronto) right behind him in 24.08.  Alberta’s Josh Au was third in 24.32.

UBC’s Savannah King, a Canadian Olympian in 2008 and 2012, topped 200 freestyle winner Lindsay Delmar (Calgary) in the heats of the 400 Free.  King put up a relaxed 4:14.17 to Delmar’s 4:15.45.  Dino Juliannne Brown also put up a good swim to finish in third from her tenth seed.  Surprisingly locked out of the A final was Emma Sproule (UWO) who swam eight seconds over her fourth-seeded entry time of 4:13.57 to finish in tenth after the prelims.

Frank Despond (Toronto) led out the men’s side, putting up a 3:51.66 ahead of Calgary swimmer David Woodman (3:52.47) and Vikes’ Eric Hedlin (3:51.66).  Top seed Zack Chetrat (Toronto) was also into the final, qualifying in sixth position and no doubt saving some gas for his 200 fly later in the session.

Jason Block (Calgary) was off to a fast start again this morning in the men’s 200 breast.  After breaking the 100 breast record last night, he took his 200 out in a blazing fast 1:02.76 before cooling down to finish in a 2:12.77.  This put him ahead of defending CIS Champion in this event, Frederic Le Blanc who swam a 2:13.13.  Jeffrey Nicol (Lethbridge) swam himself into third at 2:14.23.  Surprise entries into the A-final were Toronto rookie David Riley and Thunderbird Sam Acton, who posted his first short-course best time in the 200m breast in four years.

Vanessa Treasure (Toronto) will enter the final of the 200m fly in first in her final year of CIS swimming, after posting a 2:17.64 in prelims this morning.  In second was Calgary’s Lindsay Delmar (2:17.79), who won the 200m free last night and will swim a 400 free in the session tonight before this event. Rookie Abigail Sayer, also representing the Dinos, swam a 2:17.86 to place third.  Stephanie Horner (Victoria), who swam for Canada in the 2008 Olympics, won a swim off against Jen McNaughton (Western) to enter the A-final in 8th.

In the final event of the preliminaries, Coleman Allen (UBC) who won the 100 fly last night in record time qualified for the final of the 200 in the top spot with a 1:59.02.  Toronto’s Zack Chetrat grabbed a spot for his second final of tonight’s session with a 1:59.18 ahead of David Sharpe (Dalhousie), who represented Canada at the 2012 Olympics in this event, at 1:59.56.  This will be a race to watch in the finals tonight.