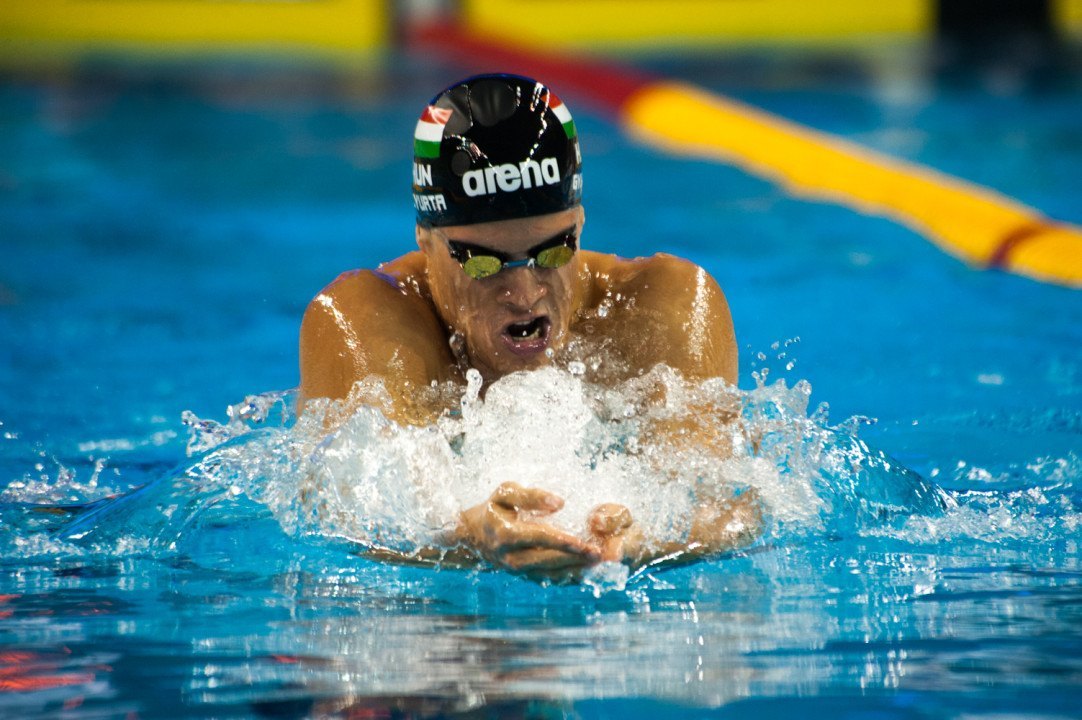 Legendary coach Jozsef Nagy is widely credited with inventing the modern “wave” breaststroke and has coached such elite-level swimmers as Mike Barrowman, Sergio Lopez-Miro and Annamay Pierse. He was inducted to the International Swimming Hall of Fame in 2013 and has recently returned to his native Hungary from the Vancouver High Performance National Swim Centre where he has agreed to coach Olympic gold medalist and world record holder Daniel Gyurta. I had the opportunity to swim under Jozsef for two years in Vancouver and experience first-hand his unparalleled wealth of knowledge and innovation of breaststroke and the sport of swimming. I recommend swimmers and coaches alike read closely, ask questions and benefit from this detailed piece on breaststroke hand positioning and revisit his article on the breaststroke turn.

The Position of the Hands in Breaststroke

The usual break down of the breaststroke pull is the following:

In this text I would like to talk about the seemingly least interesting part; the recovery of the hands. That phase starts after finishing the insweep and lasts until the swimmer catches water in preparation of the next stroke. Neither the start nor the end of the recovery phase can be sharply distinguished from the previous and following phases.

The goals in this phase are:

If these three goals are executed precisely, then as a result, the swimmer’s centre of gravity will be moving forward with consistent speed.

During the recovery of the hands, other important movements are taking place and these significantly affect the entire stroke cycle.

Looking at the hand position of the best breaststrokers, many similarities can be observed. The most obvious one is the position of the palms. At the beginning of the recovery of the hands, most swimmers are “praying”– their palms are facing towards each other.

And by the end of the reach they are facing downwards. The hands should be higher than the elbows during the entire reaching phase.

The elbows are moving forward — not too deep, but close to the surface — while the hands are sliding forward on top of the water.

Now, let’s look at the “natural” positioning of the hands: if we are standing and the arms are easily hanging beside our bodies then our palms are facing a bit towards the thighs, a and slightly backwards, roughly in a 45 degree angle to the body.

This means that the upper arm bone (humerus) is turning approximately 45 degrees to the inside, while the forearm bones – ulna and radius – are twisted approximately 90 degrees relative to each other.

All this without any muscle work! That is why we can call this a natural arm position.

During breaststroke when the swimmer is moving the hands forward, the upper arms are not turned 45 degrees inwards (unless the swimmer is bringing the elbows forward a lot wider than the hands) thus the natural position of the hands in this case is the palms facing each other.

The only advantage of this movement is that it’s natural. But there are disadvantages as well. The surface and size of the palms in swimming is very important.

Breaststroke would be more efficient with palms facing down when the hands are moving forward.

This would allow for the swimmer to take advantage of the dynamic lifting power ascertained from employing this hand position.

If the palms are facing each other, then due to a lack of surface support, the swimmer can hardly keep his/her height over the water because he/she cannot lean on the palms. Referring back to the above stated third goal of the recovery phase, the swimmer involuntarily sinks slightly, thus making the stroke less efficient.

If the hands are facing each other then the swimmer will not utilize the critical feel for the water through the sensitivity of the palms. In essence, they will reach forward in a very machine-like manner, contrary to the natural, fluid movement we desire. Further, by the end of the reach, the palms that are facing each other or upwards, must be turned downwards anyways in order to be in the proper placement to begin the next stroke. It is only efficient to start the next pull if the hands are turned out in (min.) 45 degrees by the end of the reach.

I do not know how much is voluntary in the hand position of the swimmers shown in the pictures and what part is instinct dictated by talent and instructed by coaches. But one thing is sure: if trained to pay attention to how they bring their hands forward and keeping their fingers straight, breaststrokers can find significant improvements to stroke efficiency with very little cost in effort.

Even the best swimmers in the world do not implement necessary hand position that would help them to reach the third goal – e.g. postponing the sinking of the body.

They do not focus on the details of recovery hand position. This is visible on the pictures. It might seem a pointless detail, but we should not forget that in our sport every tiny detail matters, or it can be even decisive. In swimming, a 0.01 second difference might mean victory or loss. The 200m breaststroke is swum with 60-80 strokes. A small technical detail might mean a couple of millimetre advantage or disadvantage ( x 60-80) by the end of the race might result in victory or not even getting into finals.

In reference with the previously listed goals, the question arises: if it is all so logical then why even the best swimmers are not doing it right?

Is it possible that there are still bigger/more important tasks to solve? Or we are just not there yet, at these tiny details? Both are possible, but I still think this is a bit too big of an oversight.

I was taught a long time ago that my hand position should mimic reading a book as the hands come up and recover facing the sky and I have read articles this year starting the same thing. It seems like a waste of previous energy to effectively be pushing water up to the surface when doing so. Plus, pushing water up pushes your body down. I think it is much better to bail out of the press as the hands sweep in and reverse the hand motion as this article states so the face each other instead of face up and flatten out as you reach. It may sound insignificant but if you over tax your arms you will show… Read more »

You’d have to make a miracle happen to get 0.01 away from peaty lol

We want A-um Peaty. Out with the old, in with the 56s 100m breaststroke speed.