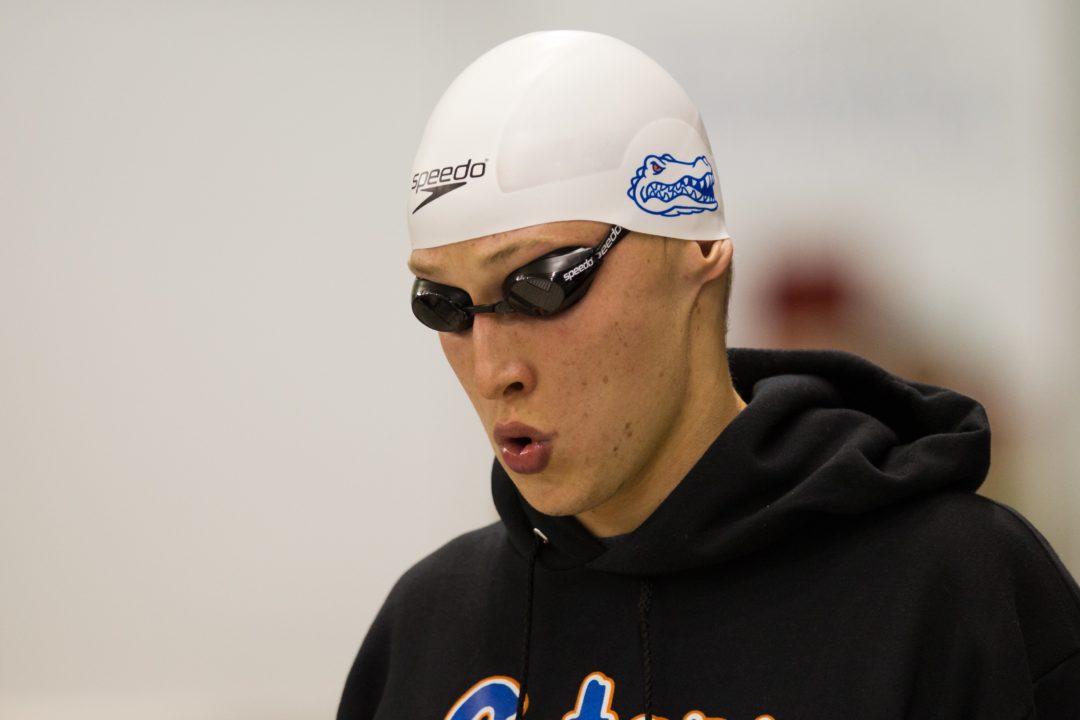 The Missouri tigers played host to the Florida Gators on Thursday evening in Columbia, in what was both teams’ conference...

The Missouri tigers played host to the Florida Gators on Thursday evening in Columbia, in what was both teams’ conference openers, and the Gators came away victorious in both the men’s meet (169-130) and the women’s meet (181-109).

With a dominant performance in the women’s meet, these Gators are putting up very similar early-season times to the ones we saw from them in the 2009-2010 season, which resulted in an NCAA title, and that’s why they’re in the conversation for the same this year, despite the quality from Cal and Georgia.

Missouri had an outstanding relay of their own, touching in 1:42.02; they graduated their top backstrokers from last season, but aside from that had a fantastic performance that included a 23.3 split from junior Dani Barbiea on the butterfly leg. That’s already faster than she split at NCAA’s last year, along with the majority of the other butterfliers on the 200 medley relays at that meet.

Elizabeth Beisel won the 1000 free in 9:43.79. That’s the best time in the country coming into the day, though North Carolina’s Stephanie Peacock was about a second faster on Thursday night in Austin.

UCLA transfer Megan Rankin was 2nd in the race in 10:01.6, as the ever-improving Gator distance group went 1-4 in that race (even without their best distance swimmers, Jess Thielmann and Alicia Matheiu, in the race).

Beisel got individual win #2 in the 100 back, where she swam a 54.29 to top the aforementioned Dani Barbiea’s 55.99. For Beisel, that’s faster than she was all of last season out of either mid-season or year-end championship meets; without an Olympics looming or lingering for the first time since she came to Florida, Beisel looks as good as she has this early in the season since her freshman year in the swamp.

Beisel would complete her schedule later in the meet with a 2:16.72 in the 200 yard breaststroke – just .07 seconds behind the Gators’ top breaststroker, Hilda Luthersdottir.

Missouri got their first win of the meet in the 100 breast, where Iowa-native and freshman Katharine Ross was a splendid 1:01.90 to beat Luthersdottir’s 1:03.0 for the win. That’s already the 5th-best time in Ross’ entire swimming career, which says that Greg Rhodenbaugh and staff have started to translate the men’s breaststroke success to the women’s group as well.

Those wins were wrapped around a 1-meter diving victory from Kahlia Warner of Florida. Warner came on strong at the end of the last season and gives the Gators a real diving threat this year. Absent from the meet was Missouri All-American Loren Figueroa.

Ashlee Linn took the women’s 200 back for the Gators in 2:01.17. Last season, as a freshman, Linn tended to be a bit faster in October than this race en route to a high finish at the SEC Championships.

Lindsey McKnight won the women’s 500 free for Florida, ahead of Matheiu’s 4:54.21. McKnight has a great 200 free, but hasn’t really done a lot beyond 200 yards until the last 12 months or so (she had been, largely, a sprinter). As head coach Gregg Troy has continued to push her to get better in the 200 and 400 IM’s, though, this 500 free seems to have been a fortunate byproduct – that’s her best career time by four seconds.

After three second-place finishes in her first three races, Barbiea was finally able to break through for victory in the women’s 100 yard fly. She won that race closing like a freight-train in 28.61 with a total 54.52 time: a second-and-a-half better than runner-up Hinds of Florida’s 56.11. Hinds was 9th in this race at NCAA’s last year, whereas Barbiea was 15th, so that’s a bit of a preview swim in this meet.

Lauren Reedy gave Missouri a second-straight win, cracking the 3-meter springboard event by a tiny 2.25 points ahead of Warner.

The Gators wouldn’t lose again in the meet. Rebecca Rainer, Jordan Smith and Danielle Valley went 4:24’s in the women’s 400 IM, finishing in that order, for a huge Gator domination.
Florida would end the meet with a 1-2 finish in the 400 yard free relay, showing off what is a relatively new-found sprint depth for the team. The best split was a 50.30 for Hinds, though Ashlee Linn splitting a 50.9 on the B-relay might be a pleasant surprise, given that she didn’t flat-start better than 52 seconds last season.

The men’s meet started off very competitively as well, and though the Gators ultimately won fairly comfortable, the Tigers made things interesting enough that Florida’s men couldn’t really gamble with exhibition swims at the end of the meet.

The two teams both had good medley relay results, with Florida winning in 1:28.20 and Missouri in 1:29.47. The two teams were pretty even (with Missouri actually holding a slight lead) through the first-half, but the Gators put it down hard in their last two legs.

There, Marcin Cieslak split 21.0 on the 50 yard fly and Brad deBorde split 19.52 on the 50 free. Those are two back-half legs on this relay that will compete with anyone in the country at NCAA’s.

In the first individual event, Florida freshman Mitch D’Arrigo and sophomore Arthur Frayler showed off the strong distance recruiting that this team has done the last few years. D’Arrigo took the win in the 1000 free in 9:08.55, with Frayler touching 2nd in 9:11.64.

For D’Arrigo, who specializes in the more middle-distance freestyles, that’s actually the first time he’s officially swum that race. Even without that context, it’s a great swim for a freshman.

Senior Sebastien Rousseau would win the 200 free in 1:37.38. That’s right in the realm of a group of four swimmers (Michigan’s Wynalda, Notre Dame’s Dyer, and Louisville’s de Lucca) that are tightly-gapped as the four best times in the country.

Corey Main, another swimmer with a lot of expectations for the Gators, also had a great meet. He won the 100 back handily in 48.03 ahead of Missouri’s Logan Mosley, even though Mosley outsplit Main on the medley relay.

The Tigers picked up their first win of the men’s meet in the 100 breaststroke, a race where the Tigers had two scorers and four qualifiers to last year’s NCAA Championship meet. All-American Sam Tierney took the day in 55.13, beating Marcin Cieslak from Florida and his 55.56.

Cieslak, as most of our readers will note, is certainly not a butterflier. That is a great swim in an off event for him, but later in the meet, he got back to basics with a 47.50 in the 100 yard fly. That leaves him with the two fastest times in the country in that event this season.

Max Grodecki put Missouri back in the win column with a 20.72 in the 50 free officially, though, deBorde was the fastest to the wall in a 20.4 (he had 5 entries, hence the exhibition.) That was followed many-time Missouri diving All-American David Bonuchi’s first win of the meet when he ran away with the 3-meter title in 395.13.

Wallace, whose hopes bank largely on the IM’s this year, is looking better-and-better in his freestyle races as well. He swam a 4:24.25 to win the 500 free by more than 7 seconds and go the second-best time of his career.

In the second men’s diving event, the 1-meter, Missouri’s Clark Thomas actually beat Bonuchi, with relative ease, 338.18-306.98. Bonuchi was 3rd at NCAA’s in that event last year, and though Thomas was the SEC Freshman Diver of the Year, he was only 28th at NCAA’s in the 1-meter.

The runner-up Tigers received a 44.27 split from Chadwick: a second-and-a-half better than he was in his flat-start swim.

Florida’s men return to action with a home meet against Georgia on November 1st (two weeks from now), while their women immediately head on to Cal for a monstrous two-day dual meet in Berkeley, California.

Up next for Missouri is a Kentucky-Northwestern-Southern Illinois quad on October 24th and 25th for both the men’s and women’s teams.

You wanted to say that Cieslak is certainly not a breaststroker. 🙂

D’Arrigo already looks great. 9.08 so early in the season is a very decent time. I think he will be very quickly among the best NCAA distance and mid-distance swimmers.
Beisel shows she’s in shape and ready for a big final college season.