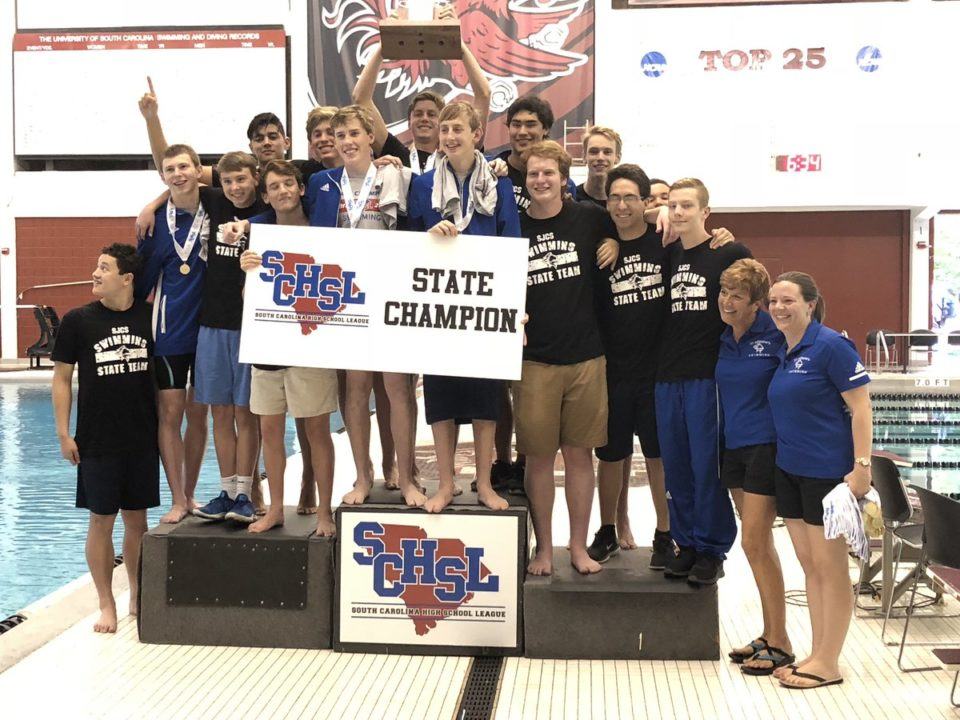 Day two of the South Carolina High School State Championships continued this Saturday morning as the class 3A schools competed for their titles. On the girls’ side, a close battle for the 2018 SCHSL 3A title went to the girls of Christ Church Episcopal School. The boys of St. Joseph’s Catholic School took their second consecutive state title by a 130-point margin.

As shown by the final team scores, the chase for the championship title came down to the wire. Many close races were seen as many of these girls fought to earn points for their teams. The intense atmosphere could best be captured in both the 200 medley and free relays.

The first event of the meet, the 200 medley relay, started with the Oceanside relay taking a comfortable lead after the breaststroke leg. Yet, Christ Church’s butterflier, Nele Stroebel, split a 25.99 to bring her relay back into contention. Their anchor, Mollie Folk, would seal the deal with a 24.56 to capture their first win at a 1:52.82. Oceanside settled for second at 1:54.41.

Freshman Kendal Chunn won both her individuals to earn points for the Oceanside team. Chunn’s first victory was in the 200 IM, winning at 2:08.45. Chunn’s second victory was in the 100 back, where she dethroned last year’s champion, Brashier’s Elizabeth Jensen, at 59.06. Jensen just broke a minute to take second place with 59.99.

The highlight of the meet came in the middle as two schools fought it out for an all-out sprint finish in the 200 free relay. After Oceanside set a big lead at the second exchange, May River’s Allie Ingram made ground on her leg to touch in 0.17 seconds behind Oceanside at the final exchange. Oceanside’s Chrisman Rand then ripped a show-stopping 23.92 to hold off May River freshman Alora Orr, who split an incredible 24.13, to take the title at 1:41.87. The May River girls settled for second at 1:42.14, Christ Church took third at 1:45.66.

In the 400 free relay, Christ Church once again had the better back-half of the relays to comeback and take the win at 3:39.83, and secure their championship title. Oceanside’s Claire DePiero and Stroebel made ground on their legs to overtake the May River relay, who settled for second at 3:45.35.

The boys of St. Joseph’s came ready to battle to defend their state championship title. However, the other schools put up a determined effort to make sure that did not happen in the 200 medley relay.

Throughout the race, three schools played musical chairs and took the lead at different parts of the race. Bishop England’s Noland Griffith first lead his relay with his 25.15 back split. Then, Christ Church’s Alec DiBattista split a 26.80 50 breast and put his relay in the lead. St. Joseph’s senior Liam Walker dove in the water and pulled his relay from third to first with a blazing 21.89 fly split.

However, Bishop England’s Addie Laurencelle ripped a 20.12 free split to nearly edge out St. Joseph’s. In the end, the St. Joseph’s boys would hold off Bishop England for the title at 1:37.13. Below are the splits of the thrilling start of the meet:

Bishop England’s Laurencelle, committed to swim for the Cal Bears next fall, then defended his title in the 50 free. Laurencelle just missed the state record by 0.08 seconds, winning with a 20.79. Laurencelle would also defend his 100 free title with a 46.08.

Laurencelle’s fire couldn’t be put out, as he aided his Bishop England 200 free relay to a victory. The Waccamaw boys lead the majority of the race, until Laurencelle hit the water and split a 20.88. Bishop England defended their title at 1:30.25, Waccamaw took second at 1:31.75.

In a very tight race heading into the final events of the meet, three men battled to finish within 0.21 seconds of each other in the boys’ 100 back. Bishop England’s Griffith would finish first amidst the mad race at 53.86. The race for second was even closer, as May River’s Matheo Velasquez (54.02) would out-touch Christ Church’s Arthur Bishop (54.07) by five one-hundredths.

After St. Joseph’s scored two double-winners, Silas Crosby and Walker, the 400 free relay became a victory lap for the defending state champions. St. Joseph’s would win the final event of the meet at 3:17.78.

Later tonight, the class 5A championship meet with compete to wrap up the South Carolina High School State Championships.