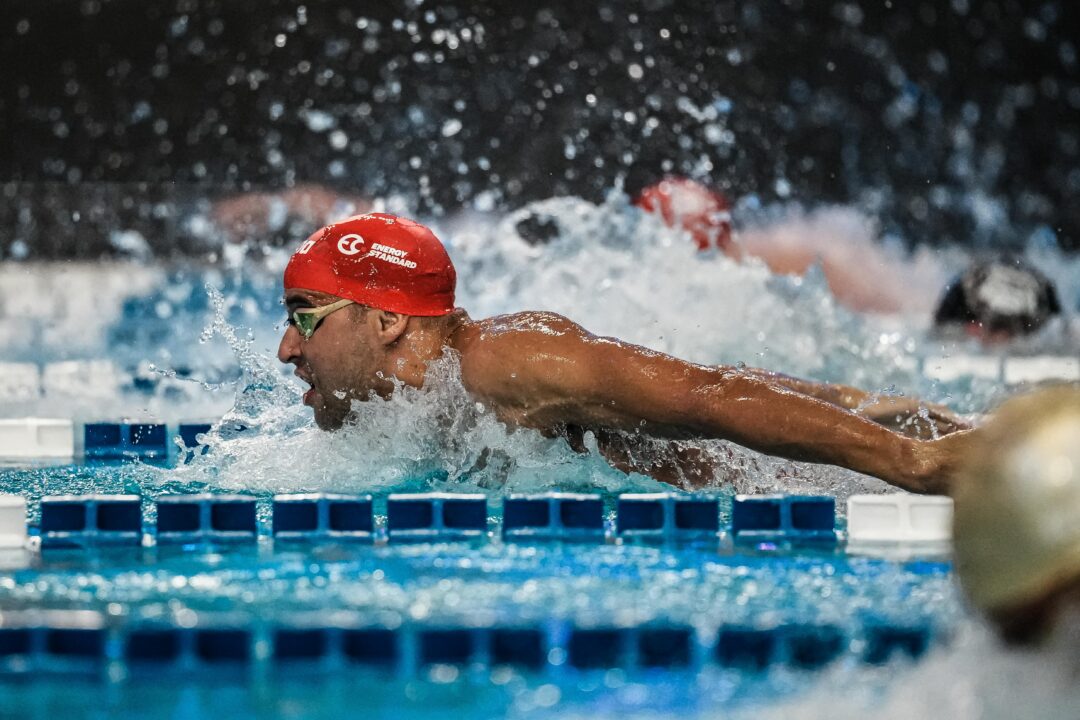 In an Olympics.com interview, Le Clos spoke about his mental health struggles following the 2020 Olympics, his opinion on Phelps, and his goals for Paris. Archive photo via Mike Lewis/Ola Vista Photography

This article discusses suicide. If you are having thoughts of suicide, please dial 988 to talk to a counselor. A list of suicide prevention hotlines around the world can be seen here.

“I just remember calling my ex-girlfriend from my hotel room and just crying for no reason,” Le Clos said in an interview with Olympics.com.  “Suicide is not who I am as a person and I’d never do it, but there was a moment on November 10th last year. It was cold in Eindhoven and I was just sad; I couldn’t even play Playstation which is my favourite thing while in a COVID bubble. Then there was a moment when I was in the shower and I suddenly thought, ‘If I died it might not be the worst thing’.

Le Clos ended up missing the first two matches of the ISL playoffs that his team, Energy Standard, competed in, and didn’t return to competition until November 25th. And while everything fell apart that night in November, Le Clos’ problems had began months before that, during his training leading up to the Tokyo 2020 Olympics. He had dealt with a bout of severe depression then, which he describes as being “worse than [his] parents having cancer.”

“I hadn’t slept properly for six, seven months as it was always in the back of my mind no matter how much I trained. I was really putting on a brave face in Tokyo.” Le Clos said. “I knew there was a problem when I walked out for an Olympic final and I was so numb from the past seven months that I couldn’t really feel any emotion. It was almost like you could cut me, I wouldn’t feel it.”

Following Tokyo, where he was 18th in the 100 fly and 5th in the 200 fly, Le Clos’ friends and family encouraged him to seek therapy, but he refused—thinking his problems would go away if he continued to compete. He attributes his reluctance to ask for help partially towards the stigma that South African males faced regarding mental health issues. “As a South African man, talking about our feelings is not traditionally what we do. We don’t speak about anything to do with not being a tough guy.” he said.

However, following his suicidal ideation in Eindhoven, Le Clos finally sought out therapy, where he did EMDR (Eye Movement Desensitisation and Reprocessing)—a type of therapy used for soldiers when they experience post-traumatic stress disorder, among other groups. What he learned from his time at therapy was that his mental health was dependent on his success in the pool.

“I’m blessed with unbelievable parents, unbelievable siblings, a great family. But I still can’t shake the fact that there’s something inside of me that still feels like nothing else will do but winning.” Le Clos said. He then cited his 200 fly race as an example of how much his self-worth was tied around success. After beating Michael Phelps by 0.05 seconds in the event for Olympic gold in 2012, Le Clos “felt like a failure” when he couldn’t defend his title at the 2016 games, finishing fourth while Phelps reclaimed gold. Despite missing the podium in the 200 fly, he still took home silver medals in both the 100 fly and 200 free.

“I went to the village [after my 200 fly race] and my whole family were there. I just burst into tears and I was so empty.” Le Clos said. “My sister grabbed me and said, ‘you don’t know what Phelps has gone through. He’s had mental issues and considered suicide. He needed that win and we’re happy for him. You have a family and you’re our hero forever’. She was saying something I couldn’t comprehend at the time and I just thought she didn’t get it. After the highs of beating Phelps at London 2012, I felt like an absolute failure.

But now I see that what she was saying was so beautiful as I’ve realised how right she was. I won two silver medals which is amazing looking back on it.”

In prior interviews, Le Clos spoke about “having nightmares” over his 200 fly race with Phelps in 2016, having “[woken] up in the middle of the night in a sweat over it”.

However, years prior to when Le Clos revealed his mental struggles, he had been confused when Phelps first spoke out about his own back in 2015. In fact, he had thought Phelps was “just looking for attention” when he detailed his anxiety and depression to the media.

“I was a kid. I was 21 years old and I didn’t understand it,” Le Clos said. “This guy’s the greatest of all time, how can you be struggling? You have all the money in the world, you have the fame, you drive nice cars, how can that happen to you?

Later on though, Le Clos realized that Phelps’s struggles resembled his own. Now, years after Le Clos publicly bantered with Phelps in the lead-up to the 2016 Olympics, he feels inspired by him.

“Then when my own struggles hit me and I was like, ‘Oh my God, I feel really bad.'” Le Clos said. “So I’m very sympathetic now towards Michael, towards everyone. Everyone thought we had this beef but I’d love to sit down and chat with him after all these years as the reality is that he’s always been a hero to me. I love the guy.”

Three months after Le Clos started seeing a therapist, he started  “[coming] out” of his negative place and “started feeling like the old Chad again.” Since then, he has gone on to win silver in the 200 fly at the 2022 Commonwealth Games, his 18th Commonwealth medal. In addition, he also moved his training base to Frankfurt, Germany, where he will train with former South African national team head coach Dirk Lange.

Now, Le Clos’ eyes are on the upcoming Paris 2024 games. In the meantime, he has opted to continue going to therapy sessions even after his mental condition improved.

“You already know that the goal is gold,” he said. “But let’s go baby steps, I’m just very excited. Everyone’s written me off already, so it’s perfect. I have no expectations from anyone, but we’ll see.”

Returning back to the podium in the butterfly events will be tough for Le Clos, as he has to face a competitive field of swimmers that are much younger than him including Kristof Milak, Leon Marchand, and Caeleb Dressel. But then again, anything can happen.

Huge credit to Le Clos for opening up about such a sensitive subject. In doing so, he’s keeping the mental health conversation going – so that one day this isn’t a sensitive subject at all. It becomes part of everyday life and no-one needs to feel ashamed or embarrassed about their mental health. I know so many people that have had/are having mental health issues – there’s something about modern life that overwhelms and disables – and it can happen to ANYONE. The most important thing is to seek help and know that it will pass with appropriate support. Be kind to yourself people, and one another – life is tough – whether you’re an elite athlete or not.

Big ups to Le Clos for opening up about this. I think it needs to continue to be addressed by athletes (especially male athletes). It brings them back to earth as humans, but also spreads awareness for an issue that continues to be a huge issue. He was the “bad guy” to most American swimmers over the past decade, but this post proves that there is more to life than swimming.

In 2012 he did what every swimmer dreams of
Doing and beat Phelps. But many people saw him as a villain for this. Then in 2016 he was clowned for losing to Phelps pretty brutal. Hope he kills it in 24

Wow, what a character arc

It is hard for me to understand how almost all best athletes have suicidal thoughts.

Probably a combination of living a stressful life and also being so high up that any direction you go seems to be like taking a downward step. When your current living style is stressful/not that happy and any kind of change feels like a downgrade, you’d feel pretty trapped

The best athletes have endorsements, which are based off their performance. Would phelps had have such lucrative contracts if he would only got 4 golds each olympics? no… so once he sees his monetary “worth” being coupled with his success, he only sees his personal being worth based on what he does. and then when he ultimately is not meeting those expectations that 9/10 the athlete themselves set a little too high. There is a feeling of failure, and the view of his personal worth drops.

you’ve never heard my name, but I’ve felt exactly like that. I’ve gone from feeling like I was on top of the world, to feeling like imposter syndrome, to depression and suicidal thoughts.… Read more »

hope you get on top of the demons le clos. love watching you race and listening to interviews with you. youre a class act and a gutsy mf

Slightly off-topic here, but I still say le Clos would have won the 200 fly in Rio if he’d only skipped the 200 free. So, his schedule was basically two 200 frees one day, two 200 fly’s and the finals of the 200 free the next, then the finals of the 200 fly the day after that. And he swam all three of his 200 frees extravagantly, too, taking out all three in 23+ foot touch. There’s just no way that a lot of the accumulated lactic acid from all that isn’t still in your system on that third day. AND your muscles are going to be somewhat torn down. And even with all that, Phelps won that race with… Read more »

Phelps has said he thought Le Clos was going to lose his focus with all the shadowing boxing and staring in the ready room and on the blocks.

Chad should have just done what worked in 2012 when he swam a perfectly paced race and swam a 1:52.9, which is still his PR.

The insomnia can be a tough problem to fix along with his nightmares about that Rio 200 fly race.

Swimming has its ups and downs. Even the greatest champions had some disappointments.

Maybe the concept of sportsmanship should be emphasized more. Part of that is accepting losing as part of the competitive experience.