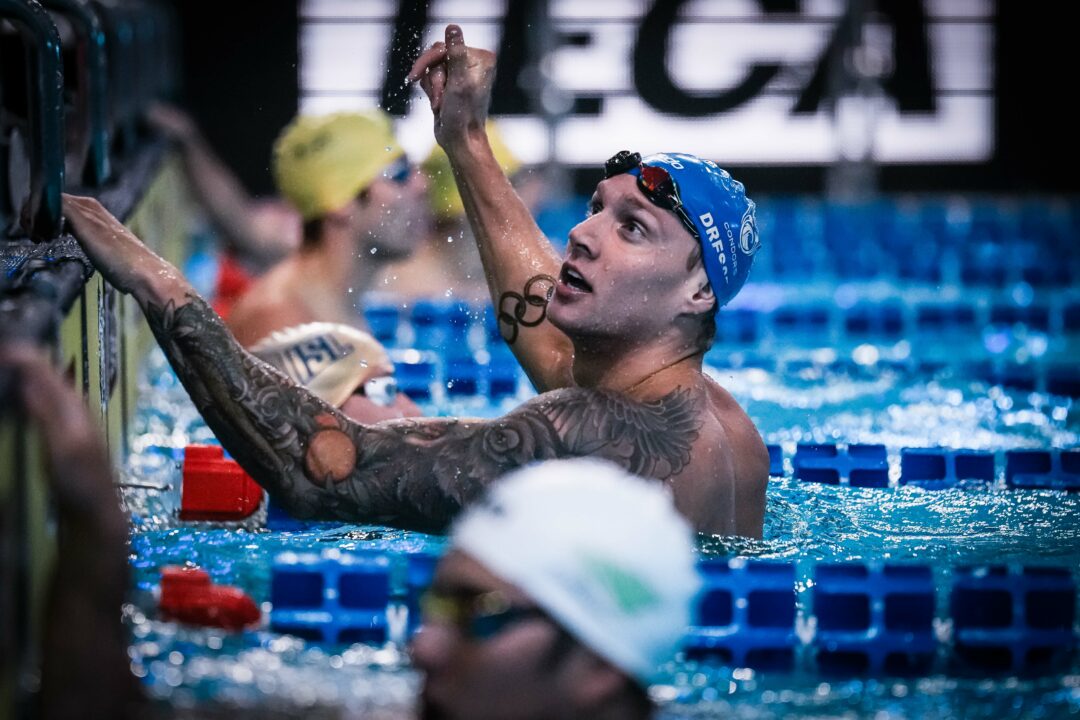 Two of the sport’s biggest stars will be absent from the opening match of the International Swimming League (ISL) playoffs on Thursday, as both Caeleb Dressel and Chad Le Clos aren’t entered to compete.

Dressel, the two-time reigning ISL Season MVP and the top scorer (points-per-match) in the regular season, won’t be in action for the defending league champion Cali Condors.

Dressel missed the club’s final regular season match, opting to head home and rest up after the club had clinched a playoff spot back in September. The 25-year-old American left as the season points leader, having scored 233 points in just five days of racing.

Dressel won 11 events during the regular season, including the freestyle skins in Match 4, and Cali’s chances of ultimately defending the league title in December rest largely on his shoulders.

Le Clos, a top contributor to the 2019 champions Energy Standard, pulled out of the FINA World Cup stop in Budapest in early October with an injury, and is one of many swimmers for the club that are absent for the opening match.

Energy Standard only has 12 men and 12 women slated to compete in Match 1, reportedly due to sickness and injury. With 114 event slots to fill, swimmers will have to race an average of 4.75 events for the club.

This has resulted in some off-event entries, such as Siobhan Haughey being entered in the women’s 50 breaststroke with the absence of Italian Benedetta Pilato.

Where is the warrior mindset? Why would Dressel post that he’s rejoining his teammates then not show up? Seems like a chump move.

I was wondering the same.
Could it be that he skipped match 1 since it is fairly long until match 2 for the condors and will do match 2 & 3?

Too many absences, and relatively pedestrian results compared to the preliminary round. 💤💤

Dressel is just a 1x league MVP. Sjostrem was the MVP the first year.

Correct. But, Dressel was the Finals MVP both times.

Forgive my ingorance, but will someone please explain how “skins” work? Thanks.

Each team enters 2 swimmers. Top 4 advance (regardless of team) to semis. Top 2 advance to final. Points can be Jackpotted in every round.

So it’s a little complicated.

Skins is 3 x 50m sprints. Each team enters two swimmers. The top 4 go to the semi and top 2 go to the final. The first two rounds are worth the same points as regular events. The last round is worth 14 points for a win and 7 for second. So if you win all 3 rounds, assuming no jackpot, that’s worth the same as winning about 3.5 regular events. With jackpots it can be significantly more. I believe (and quite a few people agree) that skins is massively overvalued in terms of points.

There are four strokes to choose from. The team with the third highest points in the medley relay eliminates one… Read more »