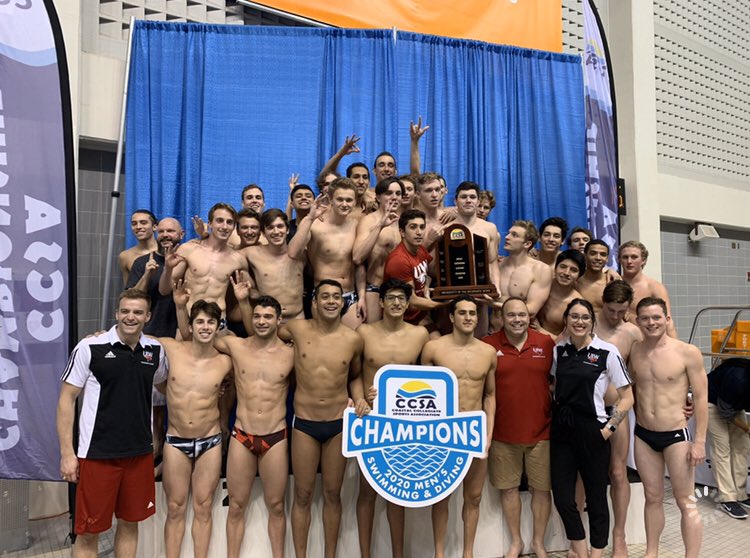 The Incarnate Word men are the 3-time defending CCSA championships in swimming & diving. They'll chase a 4-peat next spring at Liberty. Archive photo via UIW Athletics

The Collegiate Coastal Sports Association (CCSA) has announced that the 2021 conference championship meet has been moved from the University of Tennessee to Liberty University.

The move was made in anticipation of the possibility of the SEC conference hosting a split championship meet in 2021 and the conflicts that could create with the CCSA planning to bring 14 programs from across the southeast into the Alan Jones Aquatic Center while the Volunteers were preparing for a conference championship meet.

At present, the state of Virginia limits spectators at indoor sporting events in the state to 250 or 30% of the venue’s maximum capacity, whichever is fewer. Liberty’s natatorium has a seating capacity of 1,414 on 3 sides of the 25-yard racing pool.

The Liberty Natatorium, which opened during the 2017-2018 season, has been plagued with issues in its short lifespan. Recurring issues with the facility’s timing system, including at the 2019 CCSA Championship meet, resulted in a full replacement of that system. Over the summer, a 1-meter diving platform in the facility fell into the pool. Nobody was hurt, but the school removed all of the diving platforms from the facility and are planning to replace them after this season. The CCSA only scores diving in 1-meter and 3-meter events, though do usually dive platform as an exhibition event. Liberty’s 1-meter and 3-meter springboards are still available for use.

The CCSA was first formed in 2008 to host swimming & diving programs that were orphaned from their traditional conferences. In 2015, the conference rebranded, changing the S from “Swimming” to “Sports” and began sponsoring beach volleyball as well.

The Incarnate Word men have won the last 3 CCSA conference titles, while Liberty has won the last 2 women’s titles.

Both Liberty (junior Payton Keiner) and conference runners-up Florida Gulf Coast (Petra Halmai) were scheduled to be represented at the 2020 NCAA Division I Women’s Swimming & Diving Championships before that meet was canceled by the oncoming coronavirus pandemic.

Halmai, a Hungarian, who ranked 10th in the country in the 200 breaststroke last season, has already broken a CCSA record this season, swimming 59.89 in the 100 breaststroke at last week’s FGCU invitational.

Hopefully they fixed the timing system, the last time they hosted was pretty terrible. At least a 45 minute delay every single session