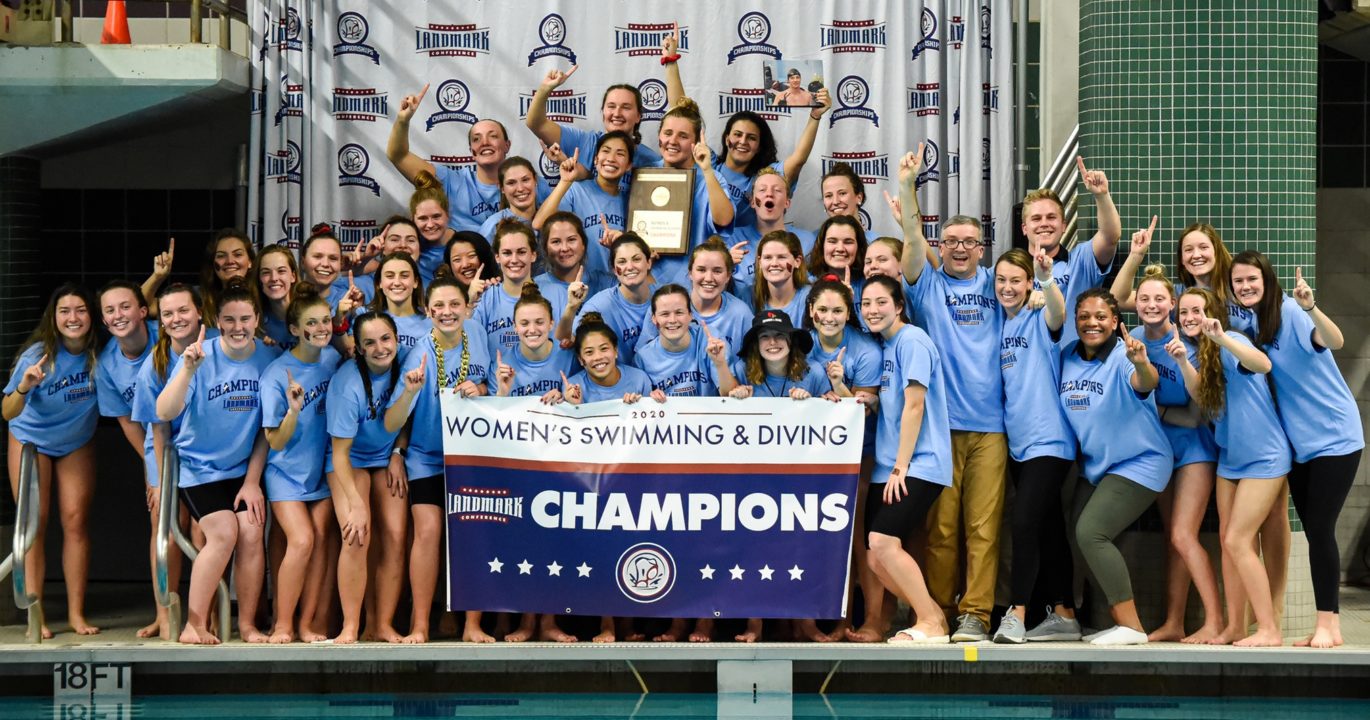 The Cardinals beat Scranton (719) and defending-champions Susquehanna (613), who had won the conference in nine consecutive seasons, dating back to 2011.

Adding to the men’s Landmark title, the women made Catholic the first program to sweep both the men’s and women’s swimming & diving championships in the same season in the history of the conference.

Freshman Kelly Smith got things started with a silver medal in the 1650-freestyle miler event in which Catholic placed three in the top eight. Her 18:08.35 time was good for second, and senior Elizabeth Spernal followed close behind for a fourth place finish (18:28.60). Freshman Mary Pilkington contributed more points of her own with a sixth place finish (18:40.68), while fellow first year Claire Laux finished in ninth at 18:55.32.

Junior Caroline Beal continued her phenomenal weekend with another silver medal for the team in the following 200-back event. She swam 2:06.50, and then freshman Alexa Hipp followed in third for a bronze at 2:06.85. Sophomore Colleen McDonald added more points with her 10th-place finish in the B-final at 2:14.72.

The silver medals continued for the Cards in the 100-freestyle as freshman Emma Gould took second at 54.84. She was one of three top-eight swimmers as sophomore Kate Von Heeringen placed fourth at 55.22 and sophomore Megan Leibfreid took eighth. Fellow sophomore Angela Castano then won the consolation final with the second-fastest overall time in the event, 54.24.

The women continued to compile points in the 200-breast as they took fifth, sixth, and seventh in the event. The three top-eight finishers all touched within one second of each other, as sophomore Cagney Boyle led the way for fifth at 2:31.06, followed by freshman Madeline Doucette (2:31.10) and sophomore Ally Noccioli (2:31.92). Junior Molly Donnellan took care of business in the B-final with a win at 2:32.31.

Catholic closed the weekend with a hard-fought bronze medal in the 400-freestyle relay. Gould, Castano, Von Heeringen, and Beal teamed up to earn 32 points with a 3:37.77 time.

With their first championship, the Cardinals became the third Landmark team to win the conference. The victory marked the end of a run of dominance from Susquehanna after nine straight championships in the league’s 13-year history.

BOYDS, Md. – The Catholic University men’s swimming and diving team won the Landmark Conference Championship for the fourth consecutive year on Sunday, finishing with a final score of 939 points over the weekend at the Germantown Indoor Swim Center.

The Cardinals topped the meet by more than 300 points in their highest-scoring championship victory, topping Susquehanna (637.5), Drew (541.5), and Scranton (535). The men also swept the conference’s major awards – Swimmer of the Year, Diver of the Year, and Rookie of the Year.

Adding to the women’s first-ever Landmark title, the men made Catholic the first program to sweep both the men’s and women’s swimming & diving championships in the same season in the history of the conference.

Freshman Robert McHale earned the conference’s Diver of the Year award after a phenomenal championship weekend. McHale won gold in the 1-meter and 3-meter diving events and made his mark on the Catholic record books, breaking the program’s former best scores with his 433.10 on 3-meter and 393.40 on 1-meter.

The men found the podium right away in Sunday’s first final event, the 1650-freestyle miler. Freshman Ellis Prescott dominated the distance event, winnning gold with a time of 16:24.36, more than 17 seconds faster than the next finisher. Sophomore Lenny Brown followed for silver at 16:41.37. Junior James Verby added to the points with a fifth-place finish (16:47.91).

At the end of the evening’s events, Prescott was recognized as the Landmark Conference Rookie of the Year after a stellar freshman season. The Las Vegas, Nev. native specialized in the distance events all year long for the Cardinals, and earned gold medals in the 1650-free and 500-free, as well as a silver medal performance in the 800-free relay.

Catholic racked up major points in the 200-backstroke with four finishers in the A-Final. Sophomore Jeffrey Schriefer-Flores led the way with a silver medal at 1:55.02, followed by fellow sophomore Joshua Roberts in third at 1:55.94. Verby and senior Dan Lawrey finished seventh and eighth, respectively, after finishing one one-hundreth of a second apart.

Another sprint event saw junior Matthew Mahon at the top of the podium on Sunday evening. Mahon took first in a tightly-contested 100-free with a 46.37, winning by two tenths of a second. Senior George Isaacs touched sixth at 48.10, and fellow senior Brian Aberle took second in the B-Final for 10th overall.

Junior Chris Grunbok made history in the 200-breast, earning gold with a 2:03.75 time that broke the championship meet record and set a new school record. The time also fell below the Division III B-Cut time of 2:04.80. Kevin Jay (4th – 2:10.74) and Kyle Kreuscher (2:11.14) rounded out Catholic’s top-eight swimmers, and sophomore Alex Farley won the consolation final at 2:13.50.

The Cardinals closed the championship weekend just how they started it, with a gold medal relay performance. Aberle, Schriefer-Flores, Jay, and Mahon teamed up for a 3:08.18, beating the rest of the competition for first in the 400-freestyle relay.

Following the meet, the team cheered on head coach Paul Waas his assistant Emily Rollo, and diving coach Riley Hawblitzel as they were honored as the Landmark Conference men’s swimming coaching staff of the year.

With their fourth Landmark title, the Cardinals remained only the second team to claim a championship victory, along with former member-school Merchant Marine Academy.

Congrats to George and all Cards, Fly High 💪