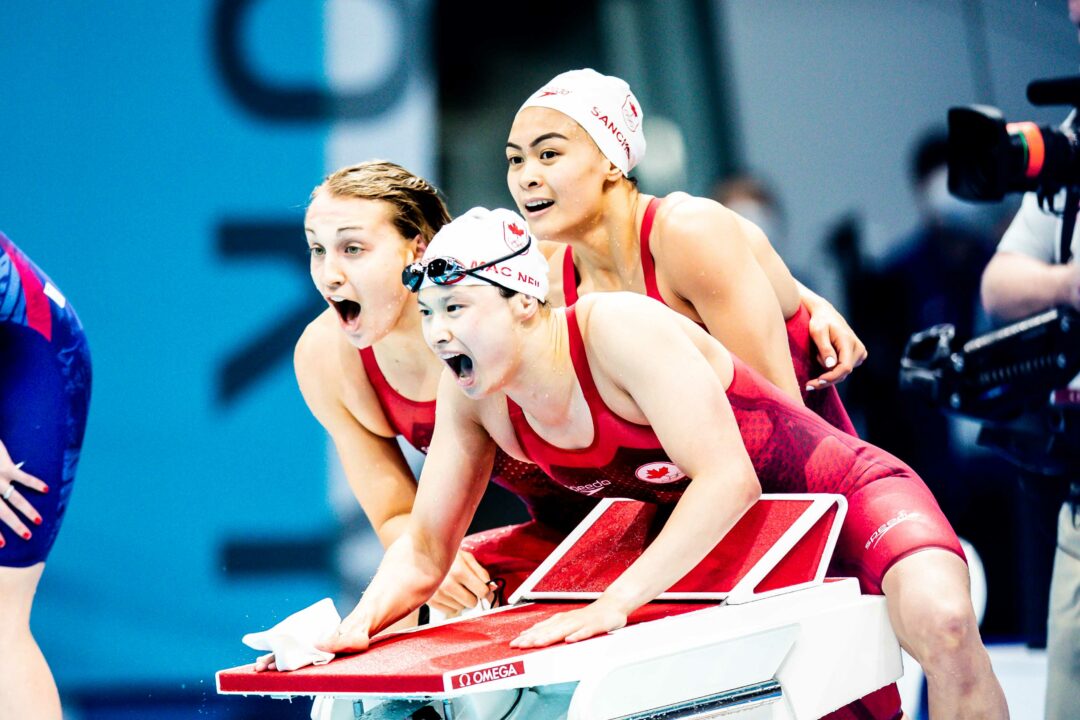 Canada picked up three medals on the first day of racing in Abu Dhabi which included a shared 4x100 freestyle gold with the USA. Archive photo via Jack Spitser/Spitser Photography

Day 1 of the 2021 Short Course World Championships has come and gone and a slightly unexpected podium leader has emerged in the form of Canada.

Canada got off to an early lead in the medal table standing on the opening day of the 2021 Short Course World Championships. Rebecca Smith started things off for the country by winning silver to Siobhan Haughey in the women’s 200 freestyle.

Canada’s third medal of the day came in the form of a shared gold with the United States in the women’s 4×100 freestyle, where both teams produced matching times of 3:28.52.

That time for the Canadians was also the second Canadian record of the session as Kayla Sanchez, Maggie MacNeil, Rebecca Smith, and Katerine Savard downed the 2016 mark of 3:29.49.

That shared win with the U.S., and was the only time that the Americans topped the podium on Day 1.

The USA did, however, collect silver and three bronzes for a total of five medals.

Next in the standings sits Italy, having collected one medal of each color during the opening day of the meet.

Alberto Razzetti notably won 2/3 of those medals for his nation as he took gold in the 200 fly and bronze in the 200 IM. Their silver medal came from the 4×100 freestyle relay courtesy of Alessandro Miressi, Thomas Ceccon, Leonardo Deplano, and Lorenzo Zazzeri.

Those four men nearly clinched the gold medal but were run down by Russia’s contingent of Kliment Kolesnikov, Andrei Minakov, Vlad Grinev, and Aleksandr Shchegolev. That win for Russia put them in a four-way tie for fourth on the medal table with Austria, Hong Kong, and Japan. Each of those nations won a single gold on Day 1 in the form of Felix Aubock (Austria, men’s 400 free), Siobhan Haughey (Hong Kong, women’s200 free), and Daiya Seto (Japan, men’s 200 IM).

Behind that pack of gold medal-winning nations, eighth place Switzerland picked up one silver and one bronze on Day 1, while Ireland and Lithuania each collect a single silver to tie for ninth. South Africa and Sweden round out the table with a tie for 11th.

While each swimmer is officially representing their home nation and not their collegiate team, it’s interesting to see how each NCAA team’s current and former athletes fared on Day 1. The University of Michigan saw two of its former stars win individual gold in the form of Felix Aubock and Siobhan Haughey, while current swimmer Maggie MacNeil claimed a gold of her own on the 4×100 freestyle relay.

Tennesee also had a solid showing as former athlete Tessa Cieplucha and current freshman Ellen Walshe of Ireland went 1-2 in the women’s 400 IM.

In addition to the past and present Michigan and Tennesee swimmers who collected hardware for their home nation, the USA’s three individual medalists all brought some NCAA representation to the podium. Carson Foster is currently a member of the Texas men’s team, while Paige Madden and Melanie Margalis have graduated from and swum for Virginia and Georgia, respectively.

Big Winners Canada and the NCAA, Young Team USA swimmers did well but unfortunately they are judged by Gold medal totals. Losers today all the breaststrokers that got DQ’d, MA, ISL cause these swimmers are getting paid lol.