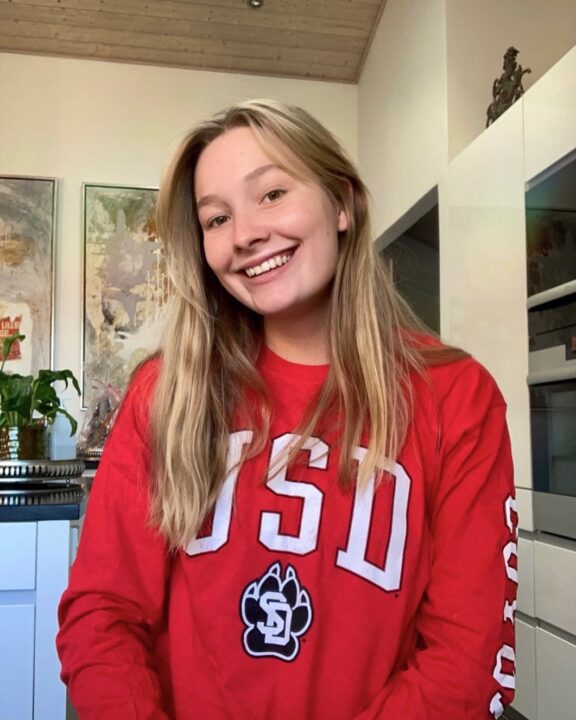 Coming to the United States all the way from Denmark, Camilla Brogger-Andersen has announced that she will be joining the University of South Dakota next fall. Brogger-Andersen currently trains with the Aalborg swim club in her home country.

I’m so excited to announce my verbal commitment to University of South Dakota. I am so thankful to have the opportunity to continue my athletics and academics future at USD and so thankful for all the support I’ve received from family, friends and coaches #GoYotes

In 2019, Brogger-Anderson was a part of the Denmark team that traveled to Czech Republic to compete in the European Junior Open Water Championships. At that meet, the Denmark team finished 12th, beating Croatia, Slovakia, and Spain.

Brogger-Andersen will be a big addition to the South Dakota team when she arrives in Vermillion next fall. After not having any swimmer dip below 24.0 in the 50 free last season, the team has already had four girls below that mark this year. Taking over the team’s sprint group this season is freshman Emily Kahn, who led off the team’s 200 free relay at the Augustana Invitational in a time of 23.27. She also leads the team in the 100 and 200 freestyles by significant margins, having gone 50.50 and 1:50.72 at the Augustana Invite as well. Brogger-Andersen and Kahn will have three years of competition together.

The Coyotes are coming off of a season that saw them finish in third at the Summit League Championships behind Denver and South Dakota State. With her converted times, Brogger-Andersen will be poised to challenge for League titles from day one. Her converted time in the 50 would have been the fastest in at the meet last season, while her 100 free would have earned her second.

While the women finished third at the 2021 Summit League Championships, the men claimed the conference title. In winning, the school ended the University of Denver’s seven-year winning streak.

The South Dakota facilities are scheduled to receive a huge overhaul, it was recently announced. Just last month, the school released a statement that they intended to begin construction on a new, 50-meter pool as part of the university’s plan to expand it’s currently existing USD Wellness Center. The $25 million dollar plan currently includes an additional 45,800 square feet featuring an indoor long course pool with seating for 400 spectators, a therapy pool, hot tubs, larger locker rooms, and meeting spaces for the varsity team and coaches. The team currently only has a 25-meter pool.