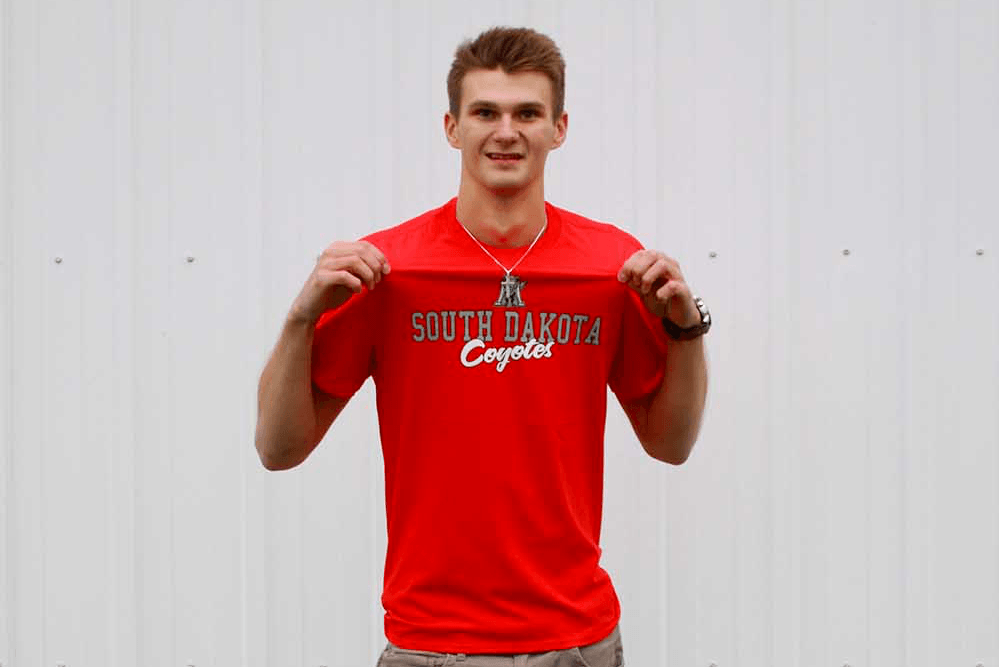 As Denver entered the meet down a few men, the University of South Dakota took full advantage and soared to a decisive victory. Archive photo via Charlie Bean

On the women’s side, the Denver women managed to keep their win streak alive and repeated as champions for the 7th-straight year. Denver established an early lead in the meet and maintaine it throughout, ending with 1,052.50 total points which was well ahead of South Dakota State’s 703.50 and the University of South Dakota’s 663.

Among those contributing to the win for South Dakota was Mack Sathre as he raced to victory in the men’s 100 IM with a 51.21, narrowly defeating South Dakota State’s Gavin Wheeler and teammate Parker Sonnabend who tied for silver with a 51.56. Charlie Bean followed Sathre’s lead in the 100 freestyle a few events later by posting a 44.92 for the win as the only sub-45 swimmer in the field. Denver collected the silver medal in the event as Darragh Mahns was a 45.16, while Valparaiso’s Dominic May notched a 45.23 for bronze.

Notably, 2 of last year’s medalists in the men’s 100 freestyle in the form of Cameron Auchinachie and Sidney Farber won swam the event last year as juniors but were not back at this year’s championships.

In the 400 freestyle relay, the University of South Dakota nearly cracked the 4-minute mark as Zach Kopp, Cooper Fuchs, Mack Sathre, and Charlie Bean came together to post a 3:00.10. That was enough to deliver one last win at the meet, getting in ahead of Denver’s 3:04.00 and Eastern Illinois’ 3:05.11.

Denver’s Brandi Vu collected her first individual win of the meet on day 3 of the championships, collecting gold in the 100 IM. She was a 56.60 in the event, getting in a full 2 seconds ahead of South Dakota’s Cassie Ketterling and Isabel Fairbanks who posted times of 58.66 and 58.71 for silver and bronze. Vu’s win was an improvement upon her previous first-place finishes in the 200 IM and 100 breast in which she took silver.

Following Vu’s win, teammate Sofia Nosach took the 200 backstroke in a 2:01.16 which was also her first win of the meet after collecting silver in both the 500 free and 100 back. Nosack’s win was a bit slower than what she swam at the meet last year (2:00.48) but a step up her 2020 second-place finish to Natalie Arky. Denver’s Livi Schmid also returned to the podium this year, moving from bronze last year to silver this year with her a 2:02.74 while Lucie Anderson was a 2:02.85 for third.

Interestingly, Aysia Leckie made it three straight events where a Denver swimmer took gold after having won 2 silvers earlier on in the meet. Leckie won the 100 freestyle with a 50.90 to add to silver medals in the 50 and 200 free. South Dakota State’s Elisabeth Timmer managed to get into the wall with a 51.27 for the silver medal while Eri Remington was bronze for Denver in a 51.35.

Charlotte Simon continued Denver’s day 3 winning streak in the 200 breast as she dropped 2.51 seconds from her morning swim to win the event in a 2:13.60. That was a second better than teammate Emily Vandenurg who touched with a 2:14.67 for silver. Sophie Bricker made it a sweep for Denver by hitting a bronze medal-garnering 2:17.55.

In the fifth and final individual swimming event, Uma Knaven gave Denver the 5th win in the 200 fly by hitting a 2:02.98 to out-swim Maddie Lavin‘s 2:04.98 silver medal swim for South Dakota and teammate Daniela Alfaro Saldana‘s 2:05.51 for bronze. In the final event of the women’s meet, Eri Remington, Aysia Leckie, Livi Schmid, and Ines Marin threw together a 3:24.51 400 freestyle relay, nabbing one final victory for Denver and finalizing the results 2021 Summit League team title.

I be that place was electric when USD won congrats Yotes

Congratulations South Dakota.Now maybe the truth about all the hazing and other big mistakes Du and the coaching staff and school made can be investigated by the NCAA, Summit League and Safe Sport. Then Du can make sure they take care of everyone they hurt.The current and future athletes and their families need to be assured Du is capable of running a clean program.