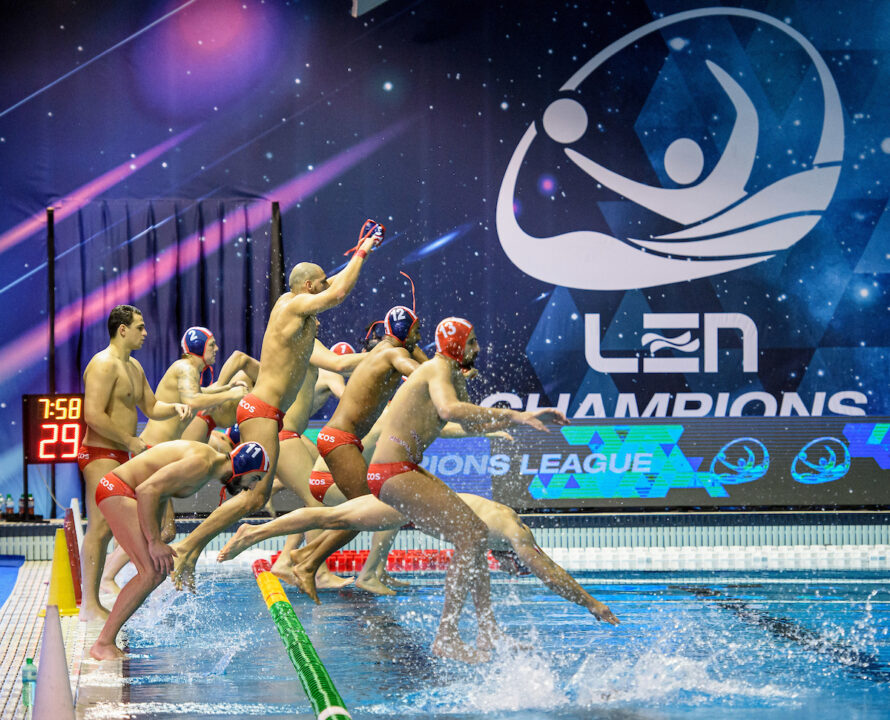 Recco already claimed the first place in Group A with two rounds to go after a hard-fought win over Spandau. Current photo via © G.Scala/Deepbluemedia/Inside

Recco already claimed the first place in Group A with two rounds to go after a hard-fought win over Spandau. A thrilling tie between Jug and Olympiacos sent the Greeks through and almost certainly secured Jug’s second place. Marseille gained a crucial win against Ortigia in the race for the fourth qualifying spot.

Just as in the past six complete seasons, Recco came first in its preliminary group and the Italians are also on their way to post another 10/10 winning ratio (had 14/14 in 2019). They stand with 8/8 after beating Spandau, though the game was much tighter than expected, especially after the Germans’ dramatic adventure with the pre-tournament Covid-tests.

As they could travel and be present in Ostia, they almost caused a big upset – at least they managed to come back to 7-7 at the beginning of the fourth period after being 4-7 down. They shut out Recco for 9:53 minutes, a rare feat by any team any time anywhere, but the Italians woke up in time, Niccolo Figari put away a 6 on 5 with 4:55 to go for 7-8. In the remaining time only they could add two more, the Germans couldn’t score in the last 7:23 minutes.

The clash of the two former champions, 2016 winner Jug and 2018 victor Olympiacos offered some thrilling moments and brilliant water polo action. Jug had a fine opening and took a 4-3 lead in eight minutes only to remain completely silent in the second as the Greeks staged a 0-3 rush. The Croats could score after 9:23 minutes but thanks to Konstantinos Genidounias, who netted 5 in the game, Olympiacos went 6-9 and 7-10 up late in the third.

Jug wasn’t done, though, the Croats netted one before the last break then hit two in a span of 36 seconds early in the fourth and tied the game at 10-10. And after three minutes of battling and swimming, Elvis Fatovic buried a penalty so with this 4-0 rush Jug retook the lead with 3:05 minutes on the clock. Olympiacos reacted well and Stylianos Argyrpopoulos put away a man- up for 11-11 right in the next possession (also halted his team’s scoreless run at 8:55 minutes). The remaining 2:27 minutes offered further excitements, both sides had shots hitting the posts – the Croats did it in a man-up – so the game ended in a tie.

A crucial clash for the last remaining spot concluded the day and Marseille got the upper hand while Ortigia became the first team bowing out from the contest. The French took a flying start and built a massive 0-3 lead by the end of the opening period. It took 11:43 minutes for the Italians to score their first but once they found their rhythm in front they added three more to trail by only one at halftime (4-5).

What’s more, they managed to equalise early in the third but they couldn’t build on that momentum. Instead, Marseille regained its confidence at the other end to stage a 0-3 surge and led 5-8 before the last period and this time they didn’t let their rival back to the match.

Ortigia had another blackout and remained scoreless for 8:01 minutes but even if they pulled one back in the fourth, the French replied with two to go 6-10 up and bagged three points which might earn them a place in the Final Eight. On Tuesday a draw against Spandau would secure their first-ever appearance on the big stage.