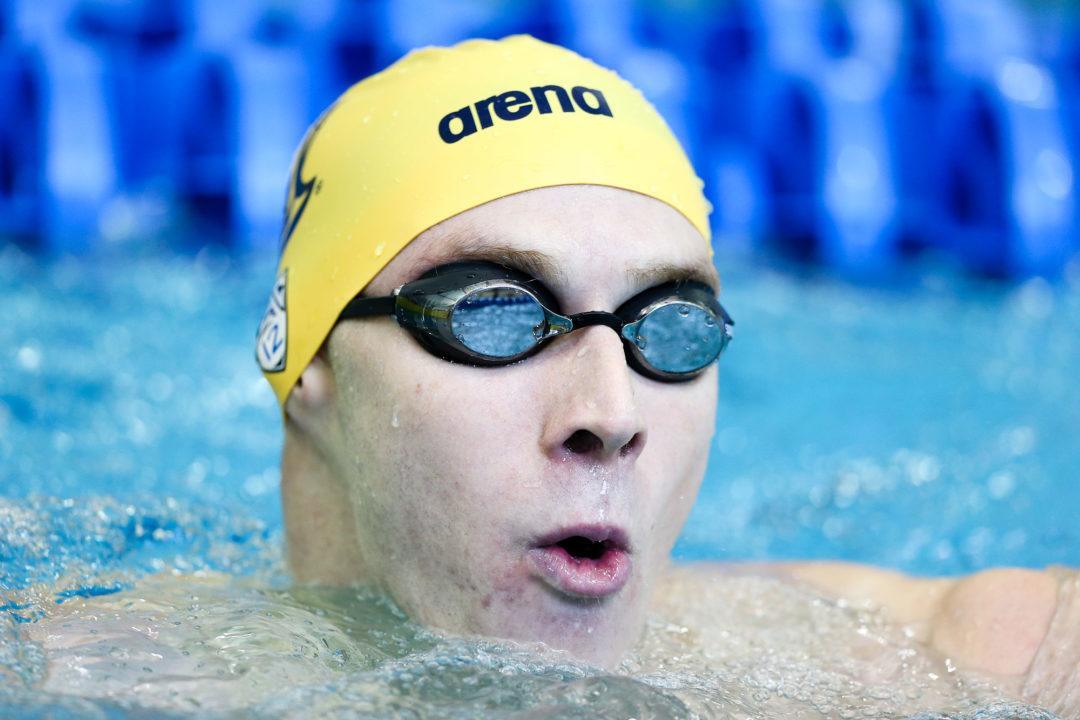 The Bears opened the meet with a gold in the 200 medley relay, breaking the Pac-12 Record and Championship Record in the process with the 1:22.31. Archive photo via Tim Binning/TheSwimPictures.com

The Cal men got things started on a record-setting note on Wednesday night at the 2017 Men’s Pac-12 Championships in Federal Way Washington. The Bears opened the meet with a gold in the 200 medley relay, breaking the Pac-12 Record and Championship Record in the process with the 1:22.31. That took almost a tenth off their previous record time of 1:22.40 from the 2015 NCAA Championships, and was just 4 hundredths of a second shy of Michigan’s NCAA Record from the 2013 NCAA meet.

With the NCAA meet coming up later this month, it’s likely that some of Cal’s top swimmers aren’t fully tapered. Take Ryan Murphy, for example, who led off the relay in a 20.78 backstroke split. At last season’s NCAA championship meet, he led off the 200 medley relay in 20.20, so there’s a strong chance we’ll see this NCAA Record go down in Indianapolis when they get to the big dance.

They’ll have to take on some tough competition, of course, if they want to claim it as their own, and they won’t have an easy time with the likes of Texas, NC State, and Florida, among others, in the mix.

In that “among others” group is the defending, correct me if I’m wrong, champions – Alabama…

Well I’m assuming they plan to attend. So yeah.

I know it doesn’t outwardly seem quite as impressive because Murphy is THAT good, but I think I’d be more impressed with a sub 20.0 50 back than I would be a sub 18.0 50 free. Both would be huge, obviously, but I think there are other swimmers in history that had they swam SCY would’ve been sub 18.0 or close; I don’t think anyone else in history besides Murphy can go sub 20.0. Crazy to think we could potentially see:

Should be a real good race with Texas at NCAAs. Wouldn’t surprise me to see Murphy go 19 on ba kstroke and Schooling split an 18 on fly

murphy goes 19.9 schooling goes 19.1. I don’t think he will quite break 19 for fly just yet but if he can improve his relay starts and his front end speed even more i could see it being possible

Well Lynch’s 19.8 there makes it a lot harder for Texas to win. Obviously Schooling is still going to be a few tenths faster, and I think Licon can gain a tenth if he’s been doing more speed work, but Murphy will be in front by… a half second or more? Who is Texas going to anchor with? Probably either Conger or Ringgold. If they’re even after fly I think Texas takes it. If Cal still leads after fly then they’ll take it, Sendyk’s 18.59 there is nothing to laugh at.

Going be interesting to see how Texas plays it.. obviously first 3 legs are going remain the same as last year

John Murray was 19.15 to close for them last year

I assume they go with ringgold who was 19.07 flat start.. and then use conger on the other 3 relays so he can swim 3 individual events (ditto schooling who doesn’t swim the 800 free relay)

Haas was also 18.7 at the Texas class relays (which was faster than even schooling went, 18.87)

could swim the 200 free relay: schooling on leadoff then ringgold, conger and haas all get relay starts to see who should anchor the 200 medley

Um, No. It would only be a NCAA record. It would also be a US Open record, but it’s kind of pointless to say that considering yards are not swum anywhere else in the world.

For the most part yes, but there are the American short course champs, where a few pros occasionally swim. The 100 and 200 back US open marks were faster than the NCAA before Ryan Murphy got to them. Same with the distance events before Katie Ledecky entered college.

Same with the 100 fly (Shields), until Schooling swims at NCAA’s.

Texas should join the PAC 12

There was talk of that a few years ago. But the Pac12 wouldn’t let Texas have the Longhorn Network on TV as it is now – they’d have to join the Pac12 network, and they’ll never do that.

Going be some fireworks between them and Texas.. can’t wait!