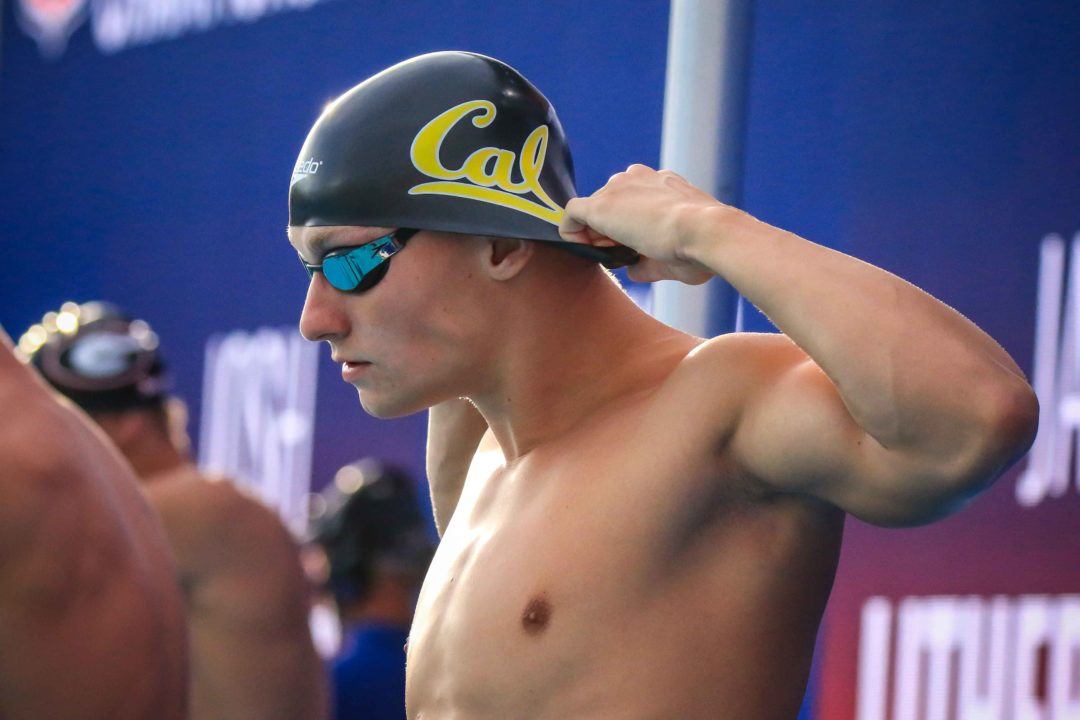 Andrew Seliskar and the Cal bears were ready to race on day 1 of the 2019 Pac-12 Championships. Archive photo via Jack Spitser/Spitser Photography

The Cal men got some bad news this week when they learned that game-changer Hugo Gonzalez wouldn’t be eligible for championship season, but that hasn’t hampered their efforts on the opening night of the Pac-12 Championships. Not only did they sweep the day’s 2 relays to open their title defense; they won the 2nd in record-setting fashion.

Seliskar split 1:30.37, which just missed the 1:30.22 done by Harvard’s Dean Farris at the Ivy League Championships for claim to fastest rolling-start split in history. Seliskar took silver in the 200 free at last summer’s Pan Pac Championships.

While Cal returned all 4 swimmers from last year’s winning relay, they swapped Trenton Julian in for for Jensen on this year’s relay. While that could have been a gamble, with Jensen’s flat-start lifetime best being faster than Julian’s by nearly a second, Cal had some cushion in this relay, especially with Stanford losing Grant Shoults for the season. Even that, however, wound up not being a factor: the sophomore Julian split 1:33.66, which is faster than the 1:33.81 that Jensen split at last year’s meet.

Cal’s relay is the 2nd-best in school history. In spite of what’s shown on the results, the Pac-12 Conference Record is the 6:09.56 that Cal did at NCAAs in 2017 (the same year where they broke the conference championship record).

I’d like to point out the fact that Seliskar is 2nd to Farris all time for rolling starts as it should be.

Can not wait for the 200 Free at Men’s NCAA this year.

Is it weird to anyone else that the fastest 200 in SCY is off of a flat start instead of a relay start? I guess it’s coaches’ decisions to put their fastest guy first and had Haas gone 2nd, 3rd or 4th in the relay, maybe he would’ve gone even faster (did he go first? I forget and too lazy to go back and look). But pretty much every other stroke/distance’s fastest split is off a relay start. Just interesting is all

Breast and Fly are the same way.

It seems pretty expected to me…1:30 was only broken for the first time last year and one of those times was a relay lead-off. So since the barrier was broken last year there have been zero relay races where all the major players are fully tapered. Even once tapered, there are fewer than half a dozen guys capable of swimming sub-1:30 even with the roll. So to get a faster split you’d need one of those guys to have an awesome swim, not be the lead off, have clean-ish water, and stick to a strategy that will allow for that time (ie not swimming crazy or too conservatively up front based on where other teams are at).

It’s the same (or very similar) story in the women’s event I think?

Think it’s the same in long course, if I remember rightly the quickest ever split is Biedermann’s 2009 lead off.

Possibly because clean water is a bit more important for 200 free? Over the 100, particularly at elite level, guys might be able to muscle their way through some chop a bit better, whilst in 200 keeping a nice smooth stroke plays a greater role.