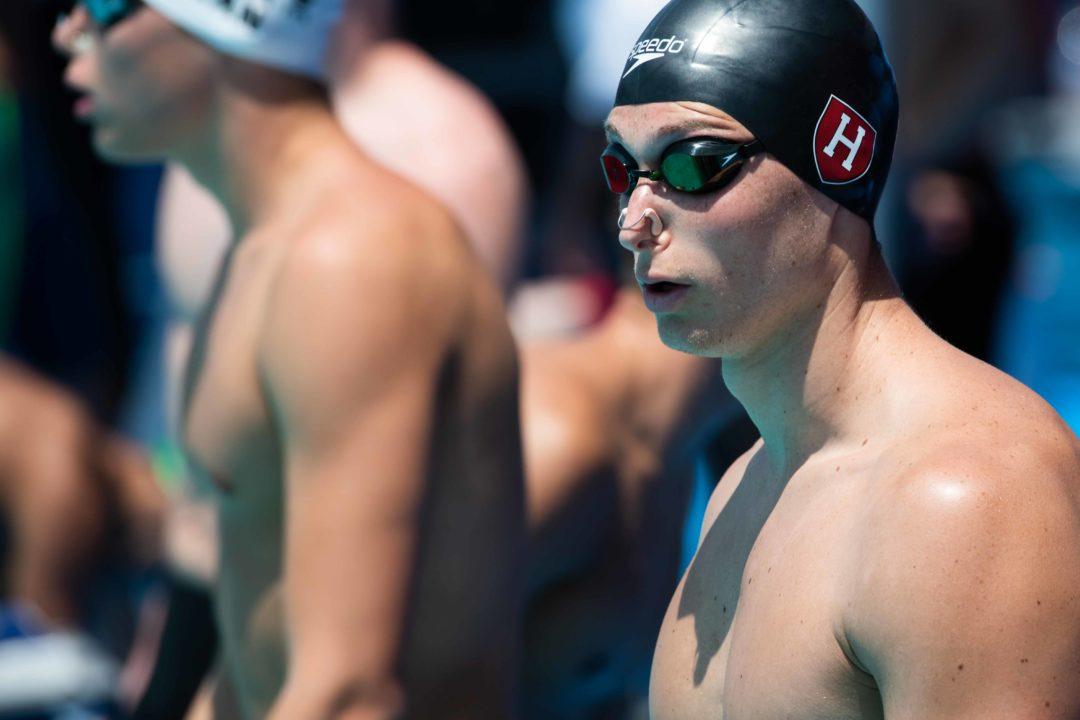 The Harvard men broke Meet Records in both relays on day 1 of the 2019 Ivy League Championships. Archive photo via Mike Lewis/Ola Vista Photography

Pre-meet, one of the biggest questions was whether or not the Harvard men were going to push straight through Ivies in an effort to improve their performance from last year at NCAAs. After day 1, the answer so far seems to be ‘no.’

The Harvard men won the 800 free relay on Wednesday by almost 9 seconds over Yale, and by 10 seconds over Princeton, including a 1:30.22 anchor from junior Dean Farris. SwimSwam believes that to be the fastest non-leadoff split on an 800 free relay in history.

The time was also an NCAA “A” cut in the event. Harvard already has an “A” cut in the 200 free relay, so this week they only need “B” cuts to qualify more relays for NCAAs. The time would have been 2nd at ACCs and 3rd at SECs.

That was Harvard’s 2nd win of the day. They also won the 200 medley relay in 1:24.33, another “A” cut, beating out Penn by 1.55 seconds. Based on pre-meet swimming points projections, Penn is going to be Harvard’s biggest challenger this week. The Princeton men were 5th and Yale was 6th, the next 2 teams based on seed.

So much for peaking at NCAAs….

Dean will be faster at the NCAAs! Go Dean Go! He adds real fun to competitive swimming!

This is curious. Ferris could win his events easily without a full taper, and save his best for NCAA’s without affecting the # of points he earns for the team at conference champs. I have to think this is a coaching decision that Conference Champs take precedence over all else. I fear that this strategy might be aimed more to amplify the coach and his prestige, than to allow a standout swimmer like Ferris see what he is really capable of on the national stage …..

Our Lord and Savior… DEAN!