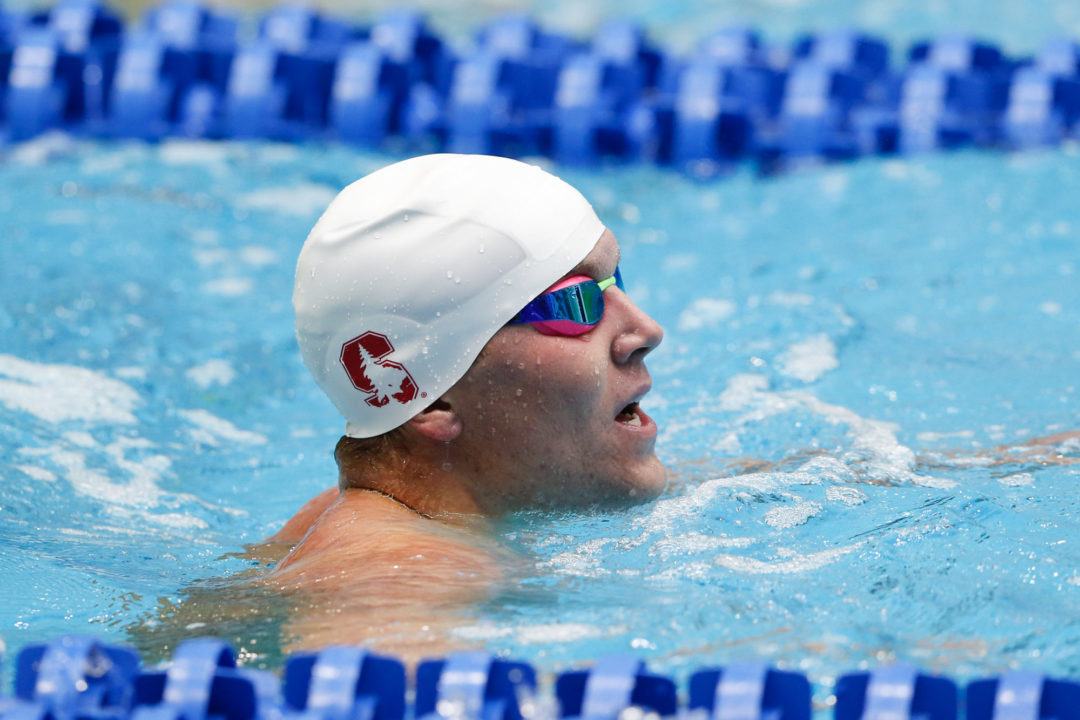 USA National Teamer, NCAA finalist, and Pac-12 champion Grant Shoults underwent shoulder surgery this week after sitting out much of the fall semester with a previously undisclosed injury, he posted on Twitter Thursday.

Shoults, a junior at Stanford University, posted the following statement:

“After 3 months of battling chronic pain, I underwent successful shoulder surgery. Thank you to my family, friends, teammates, coaching staff, athletic trainers, Dr. Geoff Abrams, the Stanford Medical staff, USA Swimming, and Dr. Warren Kramer as well as the Kramer family in their never ending support and dedication to my mental and physical health. I am excited to go through life pain free with the ultimate goal at getting back to the competitive level I was at in the water. Everything happens for a reason and this is just a testament to God’s plan. I am sure that this bump in the road will allow me to grow as an individual and as a athlete. As always, I will continue being my Stanford teammates’ biggest fan as we continue striving for our goals together in and out of the water.”

The 21-year-old Shoults had a breakout summer, taking second in the 400 free at the 2018 Phillips 66 Nationals Championships to make the United States’ 2018 Pan Pacs Team. In Tokyo, he placed fourth in the 400, qualifying for the 2019 FINA World Championships team. Shoults returned to the States and sat out Stanford’s early-season dual meets, making his NCAA season debut at the Texas Invite at the end of November. There, he swam only the 500 free, going 4:20.23 in prelims and 4:28.95 in finals.

Though losing Shoults – who totaled 18 points at last year’s NCAAs and 42 at conference – is a big hit to the Stanford men, the team remains relatively deep in mid-to-long-distance freestyle events. Freshman Jack Levant currently ranks in the top six in the nation in both the 200 and 500 free (and nabbed a Stanford record in the 200 in Texas), and junior NCAA finalist True Sweetser currently is 12th in the 500. In the mile, Sweetser, sophomore Johannes Calloni, and junior James Murphy all rank in the top-10 nationally.

SwimSwam has reached out to Stanford for a timeline on Shoults’ recovery process.

Well that stinks. Big hit on Stanford trying to make podium at NCAAs.

Can he redshirt having swam only one meet?

Typically yes, but he will have to go through an appeals process.

If true that stinks. Football players can play 4 games without question and still redshirt.

Good luck to Grant in his recovery! I hope that he takes it easy with his shoulder and follows the doctor’s indications during the first year after surgery. He’s going to have to be patient to have a good outcome that allows him to swim world class times again.

Best wishes to Shoults for a quick and complete recovery. In the 1990s, injuries sidelined Stanford greats Brian Reterrer and Jeff Rouse, and they both came back faster than ever.

In addition to kicking, there’s another thing Grant can practice: his truly amazing last turn long underwater push offs. They’re a sight to behold! Watch his 7th turn in the 400m finals at last summer’s nationals to see what I’m talking about. Who knows, maybe Grant will return doing long 15 m underwaters for both the 6th and 7th turns!

I wish him the best. Tough, classy kid!

This is truly heartbreaking. Thank you Grant for sharing this news with us. You are a champion swimmer with so many accomplishments in the sport already. One of the best in recent years. Wishing you a very speedy and full recovery!