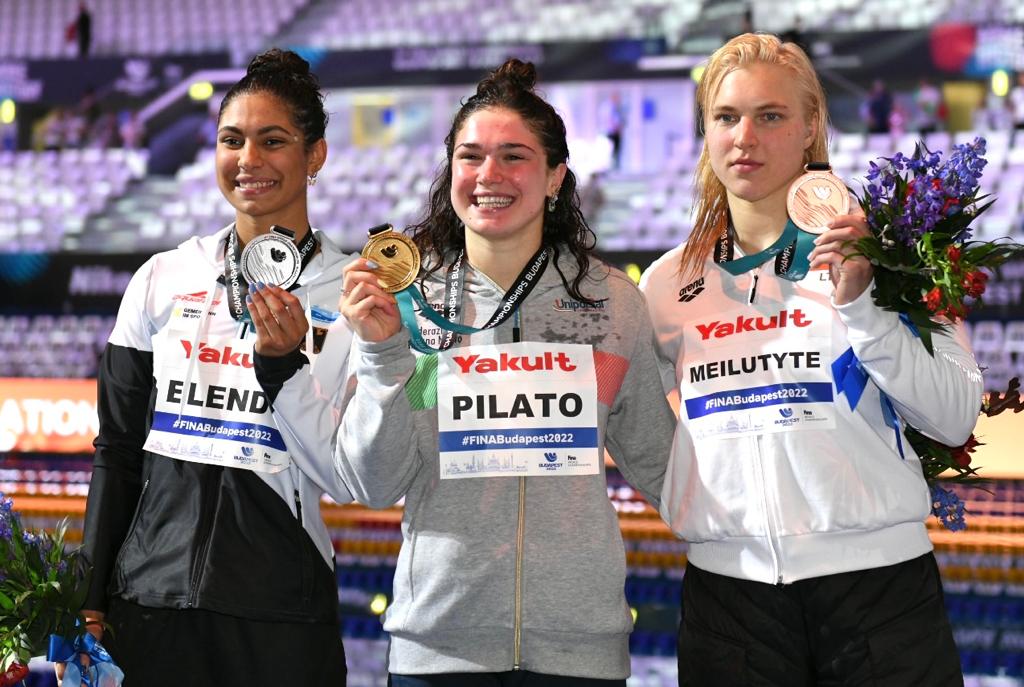 For the first time since 1986, the Europeans swept the women's 100 breast podium at the World Championships, with Italy's Pilato striking gold. Current photo via Fabio Cetti

The Europeans were on fire during Day 3 finals, winning six medals across five finals for 40% of the session’s medals. Their medal haul was highlighted by the women’s 100 breast where they swept the podium: Italy’s Benedetta Pilato won gold, Germany’s Anna Elendt took silver, and Lithuania’s Ruta Meilutyte grabbed bronze.

It’s the first time that Europe has swept the women’s 100 breast podium at Worlds since the 1986 championships in Madrid. At that meet, the East Germans Sylvia Gerasch and Silke Horner went 1-2, and Bulgaria’s Tanya Bogomilova earned bronze. Since 2001 (when stroke 50s were introduced), Europeans have swept the medals at long course Worlds 21 times, doing so most often in freestyle events.

1:05.93 is the slowest Worlds-winning time since 2005, but a medal at world championships is always an accomplishment. And for each of these three women, it marks a special moment in their careers.

For the 17-year-old Pilato, this is her first world championship title. She was one of the many young swimmers who benefitted from the postponement of the Tokyo Games, as she hit the Olympic qualifying time in December of 2020 by breaking the Italian record in the 100 breast. She also broke the world record in the 50 breast, popping 29.30 to crack Lilly King‘s record. It seemed like she was headed for a major breakout at the Olympics; however in Tokyo, she was DQ’ed in the prelims of the 100 breast.

This win is both an introduction to Pilato and a bounce-back story. With her world record in the 50 and now her gold in the 100, she has established herself as a major threat in the breaststroke sprints. Still 17, this is just the beginning for Pilato. She’ll try to go 2-for-2 in breaststroke events in her signature 50 breast later this week.

For Elendt, this medal is also something of an introduction, as it’s her first medal on the international stage. Elendt began to turn heads in yards this season. She entered the 2021-22 collegiate season with a best time of 58.06, and ended with a 56.88 — the fifth-fastest performer in history.

Her success continued in the long course pool in long-course as well, lowering her German record of 1:06.50 to 1:05.58 at the San Antonio Pro Series. She was off that record here, clocking 1:05.98 to earn her silver medal. Nevertheless, her performance here shows how much she has improved over the last three years. At the last Worlds in 2019, she clocked 1:08.70 to place 24th. In Tokyo, she swam 1:06.96 to advance to semis in 16th, where she touched in 1:07.31 to finish 13th. It wasn’t her fastest time, but getting under 1:06 again and making the podium underlines her improvement trajectory. She’ll race in both the 50 and 200 breaststrokes in Budapest, and set German records in both those events this season as well, so look for her to take a run at lowering them.

Though well-off her lifetime best of 1:04.35, Meilutyte’s 1:06.02 and bronze medal is a huge achievement for her. She burst onto the international scene in 2012, when she won Olympic gold in the 100 breast at just 15. Since then, she’s suffered many career set backs, including breaking her elbow in 2015, less than than a year from the 2016 Olympics. Though still rehabbing that injury, she competed in Rio and during that time, Meilutyte began to battle with depression. In 2018, she talked about her experience with mental health, saying that after the Rio Olympics, her depression was at its worst and she almost gave up swimming.

“At that time, I was not happy with myself and at the same time I had to go on with life and produce good results…it was the lowest point I went through,” Meilutyte said. “Sometimes I wondered what I was doing with my life, because everything seemed meaningless. It was a loss of the perception of things, that made me discard the positive side of my life and focus only on the negative. And then I did not want to train or see people.”

Because she had already announced her retirement, no one expected her to race again, but the now-24-year-old made a surprising return to competition in December at the Lithuanian Short Course Championships. It’s been nine years since she first medaled at a long course World Championships, and now at her first international championships since returning to the sport, she’s a Worlds medalist again.

Meilutyte is also scheduled to race the 50 free and 50 breast later in the meet.

Other Continental and National Records Set on Day 3

Was Lilly ill or just have an off swim? She is a CHAMPION regardless.

I think she was sick. Three straight subpar races. Regardless, there will be less benefit of a doubt next time. Two straight years King was heavy favorite in that race yet ended up with bronze and nothing. From memory she was 2/7 (-350) betting favorite in Tokyo.