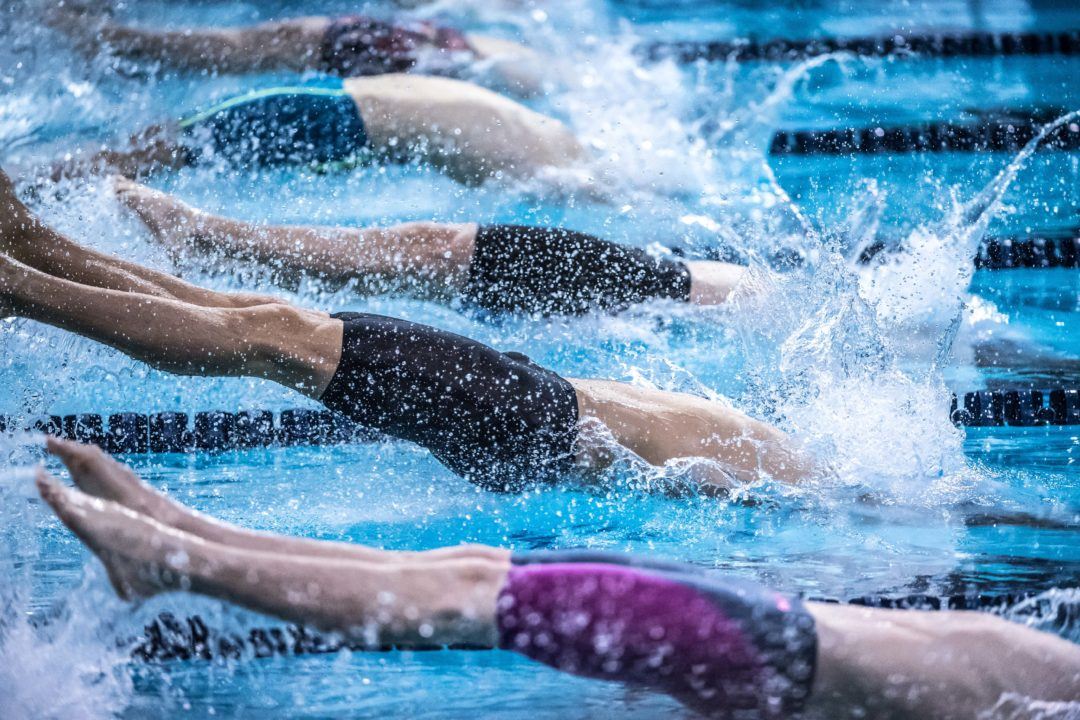 Picking up his 2nd national title ever, with both occurring at these championships, 20-year-old William Yang doubled up on his 50m victory from earlier with a 50m back gold tonight in South Australia. Stock photo via Mike Lewis/Ola Vista Photography

Picking up his 2nd national title ever, with both occurring at these championships, 20-year-old William Yang doubled up on his 50m victory from earlier with a 50m back gold tonight. Clocking a winning mark of 24.98, the Ravenswood athlete dipped under the 25-second threshold for the first time in his career, representing the only swimmer in tonight’s final to do so.

Mitch Larkin, Olympic silver medalist in the 200m back, took runner-up tonight in 25.06, while veteran speedster William Stockwell rounded out the top 3 in 25.51.

Yang’s previous personal best rested at the 25.11 he threw down just last month at the NSW Championships, but he sliced .12 off of that outing to check-in as the 6th fastest Aussie of all-time in the event.

The Bobby Hurley-trained Yang is now positioned as the 8th fastest performer in the world this season.

18-year-old Ariarne Titmus matched her own Australian, Oceanic and Commonwealth Record in the women’s 400m freestyle. Clocking a time of 3:59.66, Titmus’ time tonight equals the mark she put up for silver at last year’s Pan Pacific Championships in Tokyo to finish behind American icon Katie Ledecky.

Matching the same time, Titmus’ race splits were essentially the same as well between her Pan Pacs performance and what the teen produced tonight.

Titmus’ time keeps the St. Peters Western on the list of just 3 swimmers worldwide who have ever broken the 4:00 barrier in the event, with the Aussie positioned above American Olympic medalist Leah Smith and British Olympic legend Rebecca Adlington.

19-year-old Mikayla Messer put up a solid time of her own, albeit 12 seconds after Titmus’ unstoppable swim. Messer’s time represents the 4th fastest of her career, while Carla Buchanan  of Acacia Bayside took bronze in 4:13.18.

Look for a separate record post and video post on Titmus’ swim on our site. She is now #1 in the world right now.

It was a tight battle to the wall in the men’s 50m breast, but 21-year-old Rackley athlete Louis Townsend came out on top in 27.72. That cleared the field by .10, with Jake Packard touching in 27.82 for silver, while Sam Williamson also landed on the podium with bronze in a time of 27.89.

Matthew Wilson, the man who wowed the world with a monster 2:07.16 200m breast on night 2 for a new Australian National Record, delivered a 4th place finish here in 27.94.

Hitting her first sub-2:09 mark of the season for gold tonight in this women’s 200m fly was Laura Taylor, taking the top prize in 2:08.94. That time ranks the TSS Aquatics athlete as 14th in the world, bumping her up from 18th after NSWs where she threw down a time of 2:09.42.

The 19-year-old won silver at the 2018 Commonwealth Games behind British veteran Alys Thomas. Ther on the Gold Coast, Taylor threw down a big-time 2:07.39 to beat out Olympian Emma McKeon for the silver.

Taylor didn’t fare quite as well at last year’s Pan Pacs where she earned a time of 2:09.23 for 5th place. Her personal best rests at the 2:06.80 from last year’s Australian Championships, a mark which rendered Taylor as the 8th fastest Aussie performer of all-time.

Silver tonight went to Brittany Castelluzzo, also a teenager at just 18 years of age. Castelluzzo cracked a 2:13.19 in this morning’s heat, but slashed over 3 seconds from that time to wind up with 2:09.55, representing her first time ever under teh 2:10 threshold.

Taylor’s teammate Alice Stuart brought it home for the bronze, clocking 2:10.48, a new personal best for her as well.

Nunawading’s Jessica Hansen collected gold with her 30.82 winning 50m breast time tonight, representing the only swimmer of the final to go under the 31-second barrier. She holds a personal best mark of 30.59 produced at the 2017 World Championships where the 23-year-old finished 9th.

Right behind the whole way was the Marion foursome of Travis Mahoney, Joshua Palmer, Kyle Chalmers and Paul Elson. They packed a time of 3:42.42, with Mahoney leading off in 56.57, followed by Palmer’s 1:02.60 breast split. Chalmers produced a solid fly split of 52.44, while Elson hit 50.81 for the anchor.

Of note, Matthew Temple on the Nunawading team split 51.64 on the fly leg, the fastest of the field.

How does Bobby Hurley manage to coach both basketball and swimming? Pretty amazing!