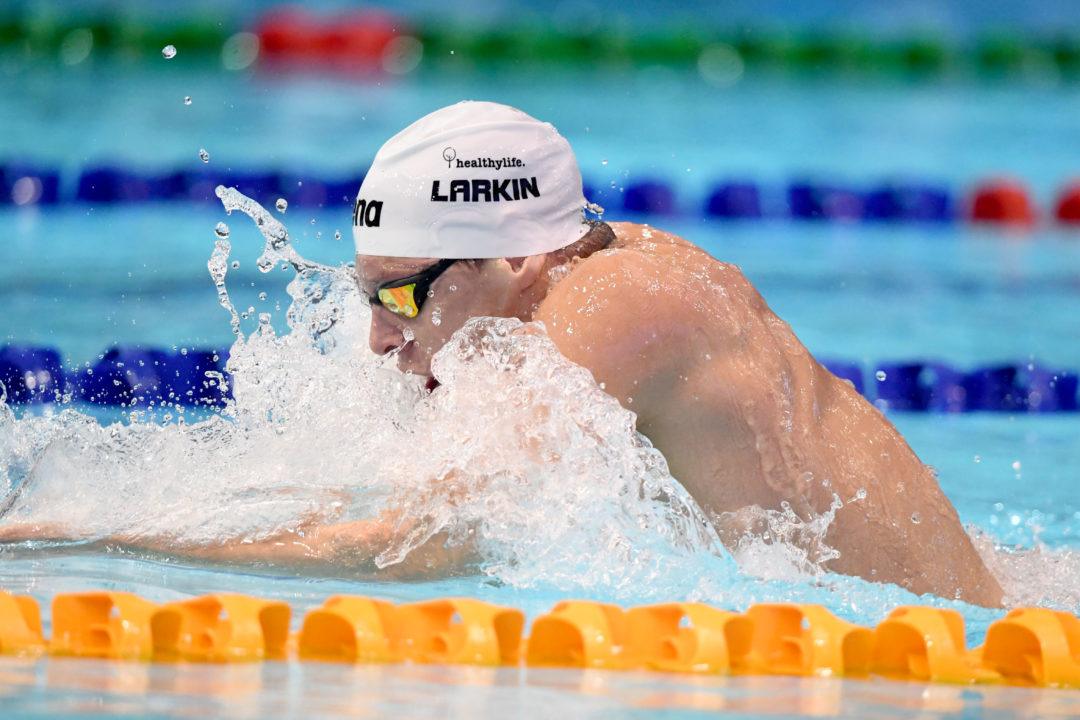 Ariarne Titmus, Mitch Larkin, Matthew Wilson and more are putting up stellar times down under at the 2019 Australian National Championships. Archive photo via Swimming Australia/Delly Carr

25-year-old Mitch Larkin took his 2nd 200m IM national title 8 years after his first, shining a light on the fact the St. Peters Western swimmer has started taking this event more and more seriously over the past few years. Tonight he took gold in a big-time 1:56.83, his second fastest time ever and also the second time Larkin has been under the 1:57 mark.

Larkin’s personal best in this event is represented by the Australian and Commonwealth Record of 1:56.21 he notched for silver behind America’s Chase Kalisz at last year’s Pan Pacific Championships.

Larkin’s outing tonight checks the Olympic medalist in as the 4th fastest swimmer in the world this season.

Matthew Wilson is continuing to swim the meet of his life, crushing a personal best in this 200m IM for silver. His 1:59.41 behind Larkin this evening establishes a new personal best and represents the SOPAC swimmer’s first time ever under the 2:00 threshold. His previous personal best was the 2:00.25 logged at last year’s Queensland Championships. Wilson takes on the 100m breast later on this sesson.

The women’s 200m free final was about as stellar as it can get, with 18-year-old Ariarne Titmus putting on a show with her 1:54.30 Australian Record, Commonwealth Record and All Comers Record-breaking performance.

The Commonwealth Games multi-gold medalist split the race beautifully, opening in 56.06 and coming home in 58.24 for her best time by over half a second over the 1:54.85 she put up on the Gold Coast last year. The previous Australian National Record was held by Emma McKeon in the 1:54.83 she produced at this same meet 3 years ago. Canada’s Taylor Ruck held the previous Commonwealth and All Comers Record in 1:54.81 set at the Commonwealth Games.

Runner-up to Titmus in tonight’s race was the bronze medalist in Rio, Emma McKeon, who put down a big-time 1:56.00 in her own right, while Madi Wilson put up a remarkable lifetime best of 1:56.90 for bronze to mark her first time ever under 1:57.

Titmus and McKeon are now positioned as the #1 and #4 swimmers in the world this season.

You can read more about Titmus’ historic performance here.

Also notable about the race was the fact that the top 4 performers were all under 1:57, making the Aussies’ 4x200m freestyle relay something fierce. Brianna Throssell, put up her 3rd personal best at these Championships, dropping chunks of time off her previous career-fastest of 1:57.82 from way back in 2015.  Tonight represents the Western Australian 200m fly finalist from Rio’s first time under the 1:57 threshold.

The top 3 finishers in this women’s 50m back all have star-studded resumes, with Kaylee McKeown taking gold in this event at last year’s Youth Olympic Games, Minna Atherton holding the World Junior Record in the event and Holly Barratt winning 50m back bronze at last year’s Short World Championships.

Tonight it was the 17-year-old in McKeown who got her hand on the wall first, smashing her previous personal best of 28.10 from 2 years ago. Along with her morning out of 27.92, tonight marks McKeown’s first meet to ever be under the 28-second threshold. Her time this evening fell less than .3 off of Emily Seebohm’s 27.37 National Record.

Worldwide, McKeown now sits as the #2 swimmer on the globe in the season’s world rankings.

After taking 200m IM silver earlier in the session, Wilson continued his career-highlight reel with a sub-minute breaststroke tonight to take gold. Hitting the wall in 59.67, Wilson fired off a new personal best in the event, dropping .16 off of his previous career-fastest of 59.83 from Pan Pacs last year. He finished 6th in Tokyo in that race.

Wilson is now 11th in the world and remains the 4th fastest Aussie ever in the men’s 100m breaststroke. But he’s #2 in the world in the men’s 200m breast with the 2:07.16 National Record he produced earlier in this meet. You can read about that historic performance here.

It was a two-woman race tonight in the final heat of the 1500m freestyle, with Kiah Melverton coming out on top with a time of 15:58.09, beating runner-up Maddie Gough by just .15. Melverton of TSS Aquatics hit a new personal best en route to gold tonight, overtaking her previous career fastest of 15:59.92 from last year’s Pan Pacs Trials. She would wind up with the silver at the actual Pan Pacs, finishing in Tokyo in 16:00.08.

Gough’s time tonight marks her first outing under 16:00, as her previous career-fastest was represented by the 16:04.62 she logged at Pan Pacs last year.

All 3 finishers in the morning’s fastest 1500m free heat clocked new personal bests in the event, starting with Bianca Crisp‘s winning effort of 16:49.94. Her time this morning marks the first time the 19-year-old TSS Aquatics swimmer hit under 16:50, with her previous personal best resting at the 16:54.71 she put up just last month.

Jessica Mouatt followed suit, dipping under the 17:00 threshold for the first time in her young career. The 17-year-old’s 16:52.30 silver medal-garnering effort wiped out her previous PB of 16:03.43 from just weeks ago.

Finally, Philippa O’Brien continued the trend by knocking over 6 seconds off of her previous lifetime fastest of 17:07.63 to clock 17:01.00.

Nope. These are reporting in the wrong order. He swam the 100br final first, then less than an hour later swam the 200IM

I think you put up the wrong results for the women’s 1500FS.

Yep. These are the morning heat results. Not the nighttime final results .

Thanks! Those are the results posting on the Aussie link…I’ll verify.

Great results overall. Aussie trials in June the most intriguing of this season.