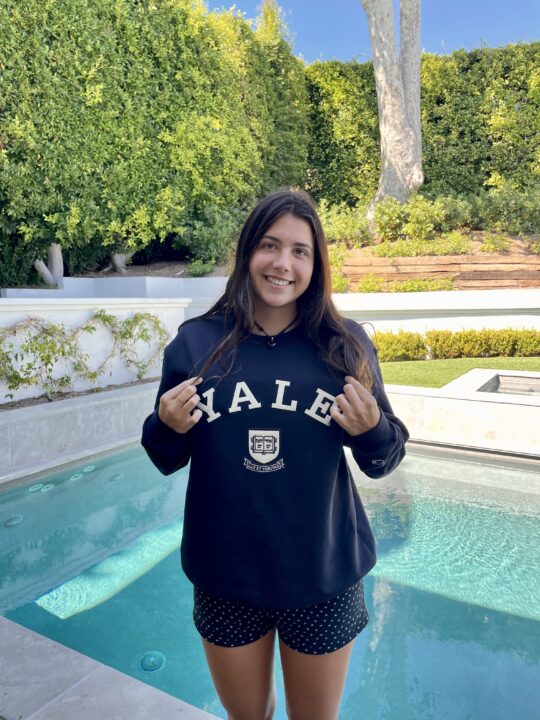 Sprinter Lily Neumann has announced her commitment to Yale University. She is set to arrive in New Haven in the fall of 2024. Current photo via Lily Neumann

Sprinter Lily Neumann has announced her verbal commitment to Yale University, beginning in the fall of 2024.

Neumann swims year-round with Los Angeles Swim Club, and is currently attending Harvard Westlake High School in North Hollywood, California. She is set to graduate in the spring of 2024.

“I’m extremely excited to announce my verbal commitment to the admissions process at Yale University!  I’m so grateful for the opportunity t o continue my swimming and studying at such an amazing school!  Thank you to my family, friends, and coaches for their support during this process.  Go Bulldogs!”

Neumann was featured in the sprint category of SwimSwam’s “Best of the Rest” section in the “Way Too Early Recruit Ranks” for the high school class of 2024. Neumann swims the 50 free up to the 200 free, but she has also shown some speed in the 100 back, 100 fly, and 200 IM

Caroline McCurdy leads the way for the sprinters in Yale’s current freshmen class, holding Ivy scoring times of 1:48.54 and 49.72. Phoebe Yeh also swims similar events to Neumann, with Yeh coming in at 23.38 and 51.12 in the 50 and 100 free, respectively.

Huge congratulations to Lily and the Bulldogs!