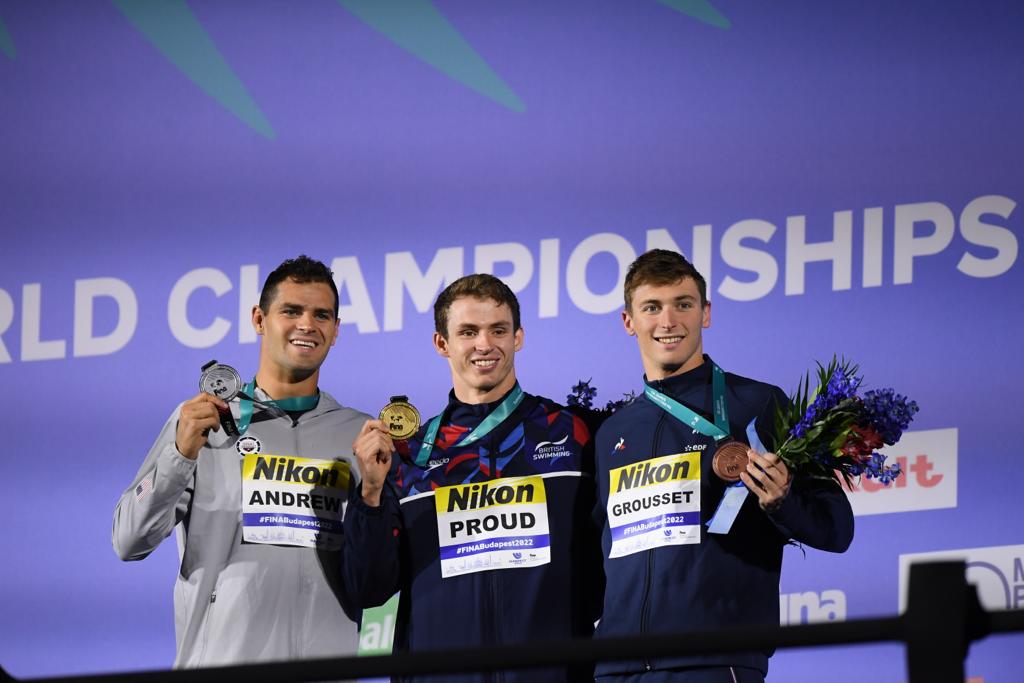 Ben Proud of Great Britain won gold in the men's 50 freestyle on night 7 of the 2022 World Championships swimming a time of 21.32. Current photo via Fabio Cetti

Winning his third 50 medal of the meet was USA’s Michael Andrew. Andrew swam to a second place finish in the men’s 50 freestyle touching in a personal best time of 21.41. With his medal, Andrew became the first swimmer to win individual medals in three different strokes at the same World Championships. Andrew spoke of his silver medal saying, “It’s good. It’s better than a bronze. Before the race I called 21.30 winning it. I was right, but it was a great swim. Personal-best. You can’t be upset with that. Super happy for my buddy Ben.”

The United States had a 2-3 finish in the women’s 200 backstroke. Phoebe Bacon finished with a 2:05.12 for silver and Rhyan White swam a 2:06.96 for bronze. This was the first swim for both athletes. Bacon spoke on waiting until day six to race saying, “Watching the meet, watching all of our friends basically get medals, swim fast and do well –  it was difficult to kind of contain my excitement, but I knew my swim was coming and I just had to be patient with myself, trust my training and all that it would come and I would swim well.”

White also spoke on waiting until day 6 saying, “It was very exciting to watch everybody race. I think it made me a little bit more excited than what I was used to from the games because by this time I’ve already swam like three 100 backs. So it’s definitely harder waiting around, but it was exciting seeing everybody race.”

Katie Ledecky of the United States won the women’s 800 freestyle making it five straight gold medals in the event. Ledecky swam her fifth fastest time all time in the swim. She spoke on her time saying, “I’m happy with it. I can’t complain. Honestly, I thought I was a little faster than that, but I mean that’s the fastest I’ve been in a while, so I am really thrilled with that and really excited about the future as well.”

Ben Proud of Great Britain won the men’s 50 freestyle gold medal and spoke of his swim saying, “Great race, great field, great fans and great job! This is a strong result. Before I came here, if someone said I’d go home as a world champion, I’d laugh out loud. I’m so grateful who helped me at home and from home, it was a huge comeback after the Olympics for me. I was here in 2017, the comeback here and collecting more memories are just awesome. This day was simply amazing.”

Kristof Milak of host country Hungary won the men’s 100 fly in a 50.14. Milak broke his own world record in the men’s 200 butterfly earlier in the meet. Milak spoke on his win saying, “Obviously, I’m not satisfied with the time as I swam exactly the same time as in the semis. But I won the gold and that’s the most important now. I’m so proud to be Hungarian and I’m overjoyed that here in the Arena 4000 people were cheering for me. I hope, in front of the TVs and all around the world all 15 million Magyars gave me their support. I’m so grateful for everyone behind me – this makes my quest much easier.”

Closing off the night was the mixed 4×100 free relay where Australia set a new World Record by 0.02 seconds. Their final time was a 3:19.38. Australian Kyle Chalmers swam the fastest split of the field with a 46.98. Chalmers spoke on the Australian relay saying, “We did not expect the world record, that was a huge swim. Every swimmer in the relay has a great World Champs here, clocking a lot of PBs. It’s a long term plan to focus on this event and of course we want get even better in this event.”

I bet his parents have never Ben Prouder

I bet his parents have never Ben Prouder

Thrilled for Ben. A lot has been made of his temperament, but he is now a 3x world champion (2x LC, 1x SC), a 2x European champion and 3x Commonwealth champion. Nearing 20 medals across worlds, europeans and commonwealths. Hoping he can grab a medal in Paris to put the cherry on top.

And his backstory is insane. That he ever became an elite swimmer from his very humble swimming beginnings is amazing.

Francis and all those involved in his early years in Malaysia should indeed be very proud. They set him up for success!

And he has probably the best body in swimming to boot. Seriously, if I looked like that, you wouldn’t be able to keep a shirt on me. “Sir, this is a Wendy’s.”