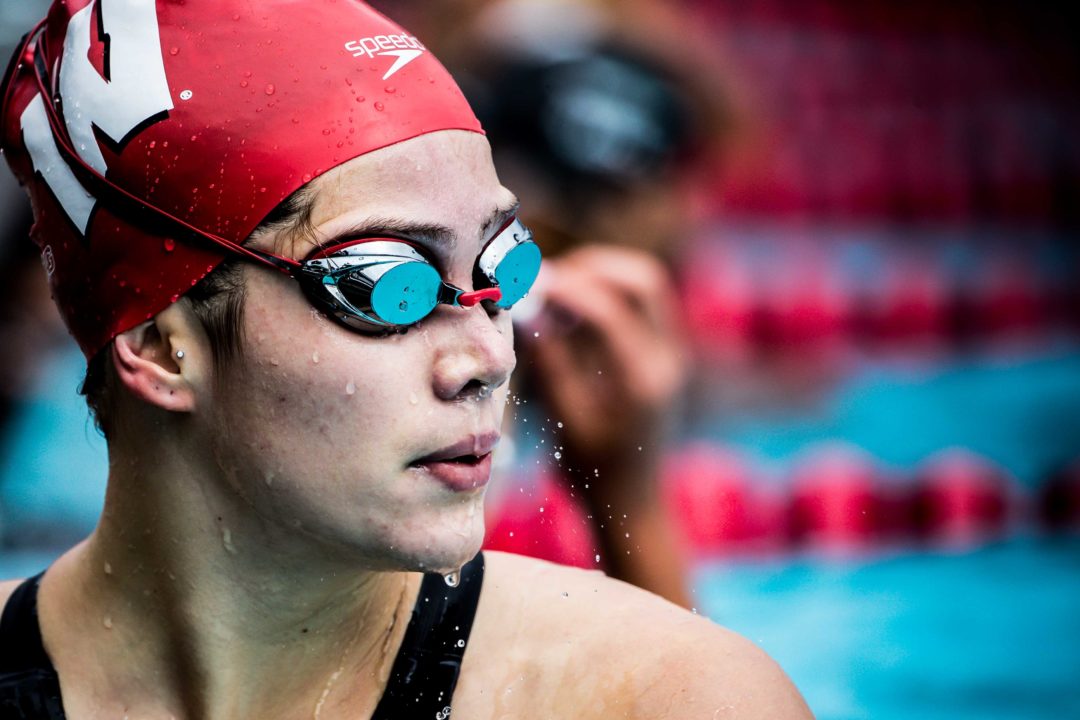 With her winning time of 53.37 in the 100 fly, Beata Nelson secured an NCAA 'B' cut. She was also the class of the field in the 100 free with a 49.93. Archive photo via Jack Spitser/Spitser Photography

Beata Nelson began her senior campaign with two individual wins of considerable margin. She hit an NCAA ‘B’ standard in the 100 fly, going 53.37 and winning by over four seconds in her most dominant performance of the meet. In the 100 free, her time of 49.93 was the quickest time by over two seconds, with Green Bay’s Anna Liu posting a 52.23 to take second.

Green Bay had a notable couple of swims from German freshman Emilie Boll. One of the top up-and-coming breaststrokers in Germany, she finished third in the 100 breast at the 2019 German Summer Champs with a long course best of 1:09.78. On Friday, she won the 100 breast by over a second with a 1:03.54 and split a field-best 28.08 breast on Green Bay’s A 200 medley relay. In the 100 breast, she set Green Bay’s freshman record, an impressive feat for a season kick-off October dual meet.

Six Wisconsin men chipped in double wins, but Matt Novinski was the highlight of the Wisconsin men’s win on Friday.

The junior backstroke specialist began the meet with a 22.10 backstroke medley relay lead-off, the only swimmer under 23 seconds. Wisconsin had Novinski lead off the A relay, but the A and B were evenly split with talent, with the B winning at 1:30.90 to A’s 1:30.95. Eric Gessner (21.93) and Kevin Braun (21.78) had nice fly splits on the B and A, respectively, while Griffin Back ultimately brought it home for the B relay with a 20.13 to inch them ahead at the wall.

MADISON, Wis. – In an impressive performance Friday at the UW Natatorium, the Wisconsin swimming and diving teams sped to victory in their season opener against Green Bay.

And it was a collective effort – the Badgers won 31 out of 32 events.

“It was exciting competing in the Big Ten again, as a coach this time,” said first-year UW diving coach Landon Marzullo. “The athletes did great. It’s an early meet in the season; they’re not doing other dives, so to have two zone cuts from Taz and Tereza was awesome.”

Freshman Braden Rumpit also earned high praise from his coach and a second-place finish on the 3-meter board, finishing with a score of 275.85.

“He (Rumpit) came up and got second-place today, and that was impressive,” Marzullo said. “The energy on deck was great. It was a lot of fun seeing that.”

The Badgers return to competition on Oct. 25 on the road against the University of Virginia.

MADISON, Wis. (GreenBayPhoenix.com) — The Green Bay swimming and diving team officially started their 2019-2020 campaign this past Friday with a meet down in Madison against Wisconsin.

“It was a good evening in the pool and on the boards for us.  It is always fun racing and diving against a talented roster like the Badgers have early on in the season,” stated interim head coach Eddie Gillie.  “The team has been training hard and it was great to finally see everyone competing.  We have a good number of athletes who are ahead of where they were this time last year, which is great to see.  The first years also had impressive showings and we are excited to watch them along with the rest of team grow as the season progresses.”

The women were highlighted by performances from freshman Emilie Boll and junior Anna Liu.  Boll took first place in 100 yard breaststroke with a time of 1:03:54, which is also the new freshman record for the program.  The former time of the record was 1:04:37, which was set by senior Clare Martell back in 2017.

The men were led on the night by juniors Max Boehlein and Bed Redman, along with senior Riley Darling.  Boehlein claimed third in the 100 yard breaststroke with a time of 57.46.  A couple events later, Darling took third as well in the 200 yard butterfly with a time of 1:53:18, but was only 00:00:15 off of the first place finisher from Wisconsin.  Redman placed second in both the 50 and 100 yard freestyle during the meet.  His time during the 50 yard freestyle was 21.24, while his time in the 100 yard freestyle was 46:90.

Both the men and women competed on the 1 meter and 3 meter board during the meet.  The women opened the diving on the 1 meter, with senior Maddy Corbin leading the way for the Phoenix by collecting 211.12 points.  Junior Izzy Bunchek followed with 196.65 points.  On the 1 meter board for the men, senior Josh Yahr led with 235.66 points, with senior Derrick Prenot following close behind with 231.90.

On the 3 meter board, Maddy Corbin again led for Green Bay with 198.90 points while sophomore Olivia Pasch followed up for the Phoenix with 194.623.  For the men, Miles Rohrbaugh led the way with 229.58 points, while Derrick Prenot earned 225.82.

My reading comprehension needs work. You said multiple times “49.9 100 FREE” and yet I got to the comments section thinking dang 49.9 100 BACK at this point in the season, holy smokes what’s she gonna do at NCAAs. Still a nice performance by Nelson, though I feel a bit deflated now.