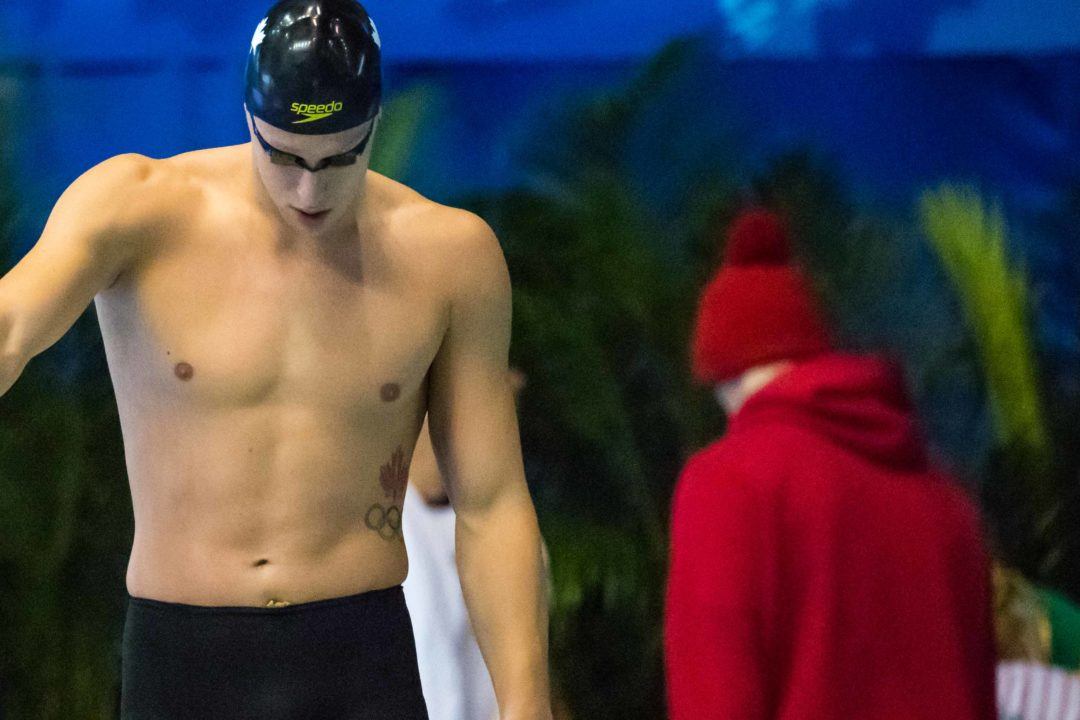 Darragh has scratched from his 6th place position in the event, likely to prep for his 200 butterfly prelims swim tomorrow. Current photo via Mike Lewis/Ola Vista Photography

Only 2 A final qualifiers have decided to scratch their events heading into the 3rd finals session at the 2021 Candian Olympic Trials.

In the men’s 200 IM, Mack Darragh has decided not to race in the final and has relinquished his 6th place seed in the event. Darragh swam a 2:03.77 during the prelims which was just on top of his 2:03.14 entry time. In Darragh’s absence, Toronto Swim Club’s Graysen Bernard will move up to 6th, and 1st alternate William Marois will get a spot in the A final.

Neither scratch is very surprising as both swimmers are likely opting out of finals in order to rest for their races tomorrow. Wiseman will enter at 4th seed in the 200 breast with a 2:28.38 while Darragh is seeded first in the 200 fly with a 1:56.68.

Tonight’s finals session will feature no shortage of exciting races, beginning with the women’s 800 freestyle in which Emma O’Croinin and Katrina Bellio hold the top 2 seeds of 8:39.63 and 8:41.77. Neither junior has made the team so far and will need to swim a PB to hit the 8:33.36.

They won’t have an easy take, however, as 200 freestyle qualifier, Summer McIntosh is entered in third place with an 8:46.15 but has an official PB of 8:35.50. That’s a solid time on its own but reveals the potential to be much faster considering that she swam that as an opening 800 split on a 1500 free.

The men will race the 1500 freestyle but someone will need to make a major move in order for the country to qualify anyone for Tokyo in the event. Stanford Li holds the top seed in that event with a 15:38.86, more than half a second over the 15:00.99 FINA A cut.

200 IM where Kelsey Wog and Bailey Andison will go head to head for the second spot on the roster behind pre-selected Sydney Pickrem.

After that, we’ll see Kayla Sanchez and Josh Liendo try to get to the wall first after leading the women’s and men’s 50 freestyle in the prelims. Sanchez was just off the 24.77 FINA A with a 25.13 while Liendo actually hit the 22.01 men’s cut spot on. Both will face dangerous fields behind them featuring Sarah Fournier and Katerine Savard on the women’s side and Brent Hayden and Yuri Kisil on the men’s.

Check back in at 5:30 pm EST for a live recap and analysis on day 3 of the 2021 Canadian Olympic Swimming Trials.

Wasn;t the top seed Michael McGillivray in the 1500? He had the B standard.