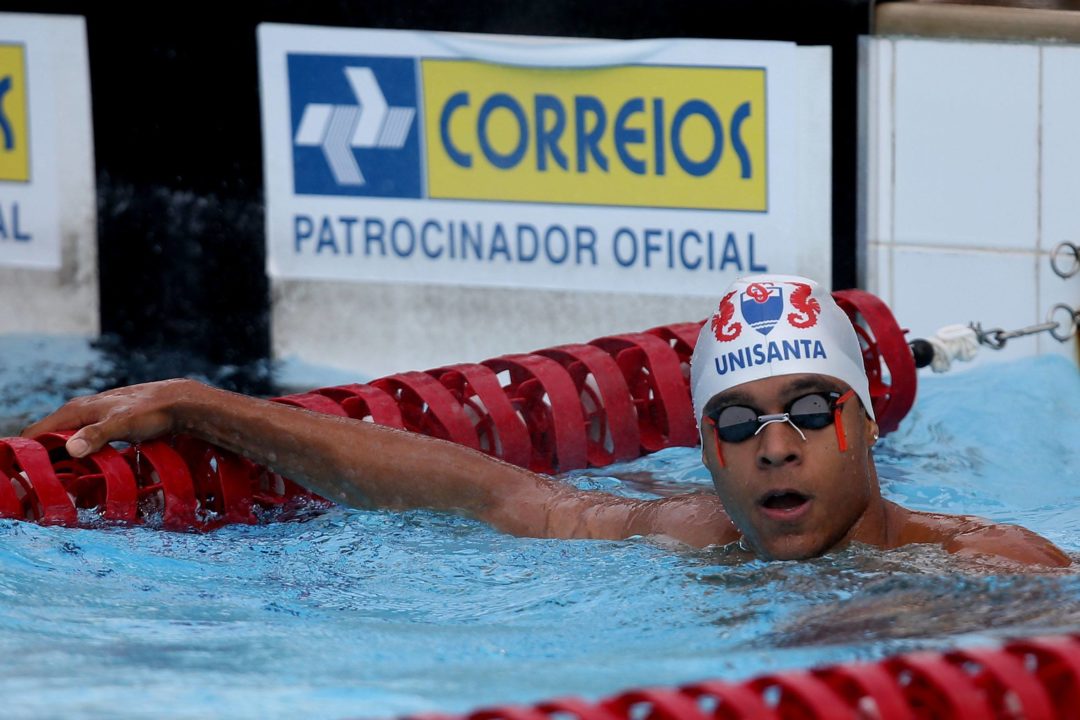 His squad's 4x100m free relay team wound up 4th yesterday, but not before Matheus Santana threw down the hammer with a 47.82 anchor split. Archive photo via Foto: Satiro Sodre/SSPress

Just two days remain of the 2015 Jose Finkel Trophy, but the Minas Tenis Clube remains the team leader after yesterday’s finals in São Paulo, Brazil.  As of last night, Minas has a 247 point advantage over Team Pinheiros, which may prove to be untouchable by the time competition ends Saturday.

Corinthians’ Leonardo De Deus claimed the first win of last night with his victory in the men’s 200m butterfly race.  His time of 1:56.53 topped the field by well over a second; a nice follow-up to his 9th place finish after semi’s (1:56.02) at the 2015 FINA World Championships earlier this month in Kazan.

The women’s 200m butterfly saw Pinheiros’ team member Joanna Maranhao swim well off her best, but still top the podium as she clocked a time of 2:13.75.  Although the time was enough to claim the title yesterday, Maranhao holds the meet record in a much swifter 2:09.41 from 2009, and also recently registered a remarkable 2:09.38 to win bronze at the 2015 Pan American Games in Toronto this past July.

Felipe Franca Silva also claimed some points for the Corinthians, clinching the win in the men’s 100m breaststroke in a time of 1:00.15.  That time earned Silva the gold, but also set a new meet record, as he surpassed the old mark of 1:00.47 previously held by Joao Gomez who finished in second place in 1:00.27.

The women’s version of the 100m breaststroke race also saw its meet record go down, as Australia’s Taylor McKeown charged to the wall in a time of 1:08.23.  With foreign swimmers common to this Jose Finkel Trophy meet, the last time a Brazilian woman has won this event was Tatiane Sakemi, who took home the win in 2011 with her time of 1:12.17.

Santana seems to finally getting back on shape (After being overweight at Pan according to Ddias), that was his second fastest split (He has 47,7 from Jr Olympics)

Also New PB for Henrique Rodrigues, he went 48,98 at WUG now he opened his team relay with 48,92. Nicolas Oliveira also opened his relay for a 48,56, I think this is a textile PB for him (He was very bad at Pan and Worlds..)

Considering his body built I think even 91kg is a lot for him.. how much did he weight last year? About 85 86 kg?

Nah… I think it was something like 88-89kg.But yes, he was already looking incredible bulk at Maria Lenk Trophy.The extra weight killed his come home speed(already around 24 mid-high last year).

Must have been ill at worlds. He should medal next year in 100

Diabetes is a very big problem for any high level athlete.. for sure but I can´t assure it was out of control or any other illness.. so can´t say why he was bad at Worlds..

One thing that was ridiculuous was CBDA idea that after Pan Am bring the whole team back to Brazil and them to Kazan instead of going directly to Kazan..

I don’t know if there is documented evidence of extensive travel affecting athletes with diabetes, but it definitely doesn’t help. Possibly it was fatigue from the extra travel with the fatigue from diabetes. Either way, it was not a smart decision to fly all the team back to Brazil.

Regarding Diabetes… the impact is not as obvious as you may think. Insulin is a very anabolic hormone that greatly assists muscle mass gains. It is actually a major driver driver of the huge change in professional bodybuilders size from the “Arnold” Days to the Dorian Yates -> Ronnie Coleman days.